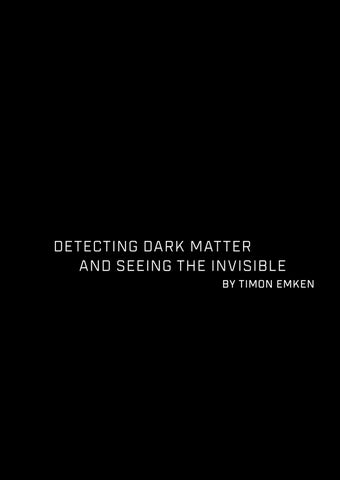 do we know, whether something exists or not? If you ask a child, why to believe for example in the sun, you will most likely get the answer “Because I can see it”. Appearing a little naïve at first, in the childish answer’s core lies a fundamental truth. Our window to reality is its interaction with ourselves. If an entity exists without interacting with us whatsoever, we will never know about it, and not assume its existence, at least in most cases. People believe in the sun’s existence, because they detect its light, hitting their retina and warming their skin. Interactions.

Why is this worth stressing? The ma-

Let’s come back to the sun and assume

that it is not made of ordinary but instead invisible matter, a ‘dark sun’. Would we still know about it? Ignoring the fact, that life on earth depends critically on the sun being bright, we can safely conclude that we eventually would not only know of the sun’s existence but also some of its properties. We would observe very peculiar motion of planets, moving in ellipses with no apparent reason. After a while it would turn out that every planet evolves around the very same point in space. If by that time Newton’s theory of gravity is known, we could infer about the exact position of the dark sun as well as its total mass, maybe even its shape, without ever having seen it directly. Its gravitational interaction with visible masses like Jupiter opens the portal to “observing” the dark sun indirectly.

In a nutshell this is what happened in the

case of dark matter. Despite its invisibility

dark matter has a visible effect on galaxies, on galaxy clusters, and even on the whole universe. Our understanding of Galaxy dynamics, of structure formation in the universe, of cosmology and the cosmic microwave background relies heavily on the existence of large amounts of invisible heavy matter.

ed neutrinos or Kaluza-Klein particles, just to name some prominent ones. Instead of introducing them one by one, let us stay agnostic about this question at this point and focus on another one: How can we empirically explore the existence and nature of a dark matter particle?

If dark matter particles are a real thing, In short, we believe in the existence of

dark matter, because we observe its gravitational interaction with the visible universe. However, this is not enough to satisfy a scientistâ&amp;#x20AC;&amp;#x2122;s curiosity, because it tells us next to nothing about the nature of this weird matter. What is dark matter? Long story short, no one knows. Todayâ&amp;#x20AC;&amp;#x2122;s best guess is, that dark matter is made up of particles, mainly because everything else we see consists of particles as well. Particle theorists have many different ideas for this particle; there exists a plethora of exotic dark matter candidates with even more exotic names. Axions and axinos, WIMPs and MACHOs, sneutrinos (no typo!), gravitinos, neutralinos, right-hand-

we should at any moment be surrounded and bombarded by these particles. To directly observe interactions between them and ordinary matter here on earth is the ambitious and challenging goal of what scientists call direct detection of dark matter.

direct detection experiment typically consists of a target mass of a few kg to a few tons. The detector aims to detect the motion of atoms or electrons from the target material after having collided with an incoming dark matter particle. The detector is usually set up deep underground, in order to filter out as much background as possible and shield of other radiation, which could mimic a dark matter signal. Ă&amp;#x2DC;

Figure 1, Dark Matter Direct Detection: A dark matter particle collides with an atom inside a detector. The resulting atom recoil can be observed directly. 19

As said before, the only confirmed inter-

action between conventional matter and dark matter is gravity. The problem with gravity is its tremendous weakness. Gravity becomes the dominant force only on very large scales or in the presence of large accumulations of matter such as stars or planets. On the microscopic particle level the gravitational force plays no role whatsoever and is effectively not detectable. Gravity is simply not strong enough. If dark matter solely interacts with conventional matter via gravity, no direct detection ex-

periment will ever be able to observe it. Therefore physicists hope that dark matter interacts with light matter in more ways besides gravity, e.g. via the weak interaction or a completely new, dark force. This hope is not just wishful thinking, but also well motivated physically.

far no direct detection experiment succeeded in detecting a clear dark matter signal. In the end, one might question, if our assumptions have been correct. Some believe that dark matter is not a particle

or matter at all, yet instead nothing but the representation of our incomplete understanding of gravity, only a relict of our ignorance. However, thanks to its explanatory power the particle hypothesis remains the champion at this point.

Let us conclude with another fascinating question: Why should nature be so simple and only provide a single dark matter particle? We know that the visible matter sector is vastly complex, rich in particles,

forces and phenomena, which only make up 15 % of the universeâ&amp;#x20AC;&amp;#x2122;s matter. The assumption that the other 85 % consist of a single component might be the natural starting point for research, but it might also very likely end up as an oversimplification. Who knows, maybe there is a large and complex â&amp;#x20AC;&amp;#x2DC;dark sectorâ&amp;#x20AC;&amp;#x2122;, with various dark particles and dark forces, and, provided that it interacts with us in some way, ready to be discovered and explored in the (hopefully not so far) future. o