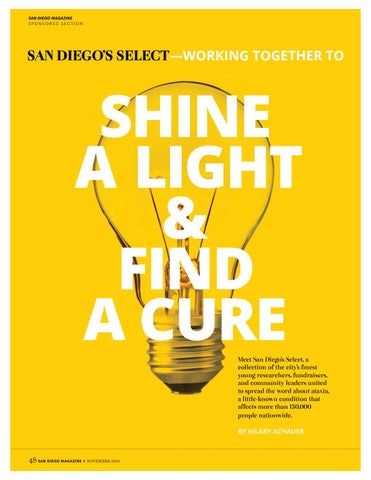 SAN DIEGO’S SELECT—WORKING TOGETHER TO

SHINE A LIGHT & FIND A CURE

Meet San Diego’s Select, a collection of the city’s ﬁnest young researchers, fundraisers, and community leaders united to spread the word about ataxia, a little-known condition that affects more than 150,000 people nationwide. BY HILARY ACHAUER

More than 150,000 people in the United States suffer from ataxia, a condition that affects the nervous system. Although ataxia affects more people than ALS, it remains relatively unknown. The National Ataxia Foundation (NAF) is working to change that. Ataxia is a group of rare neurodegenerative diseases for which there is no cure or treatment. People with Ataxia can experience difficulty walking, speaking, using their fingers or hands, or moving their arms, legs, or eyes. Most forms of ataxia are caused by damage to the cerebellum, the part of the brain that controls coordination. There are two types of ataxia: genetic and sporadic. Genetic ataxia is due to inherent damage in a person’s DNA. Sporadic ataxia is also a disease of the central nervous system, however it occurs without evidence that the disease is inherited. There is currently no medicine that specifically treats ataxia, although exercise; physical, occupational, and speech therapy; or adaptive devices can improve quality of life. The NAF is leading the charge to fund research and raise awareness about all forms of sporadic and hereditary ataxia. For 60 years, the NAF has facilitated promising, worldwide research to find answers and treatments. It is committed to education about ataxia and service to those affected by all forms of the disease. Some of the most exciting research on ataxia is happening here in San Diego. The people profiled here, who range from fundraisers to researchers to community activists, are committed to helping the NAF bring attention to this unfamiliar, devastating disease.

Holly Kordasiewicz Associate Director, Ionis Pharmaceuticals Holly, who started working on ataxia as a graduate student at UCSD, has always been fascinated by neuroscience. “In my grad school rotation, neuroscience was the only lab that had a disease focus,” Holly says. “That was compelling for me, that my work would be directly applicable to somebody.” Now Holly is continuing her work at Ionis Pharmaceuticals, pursuing a treatment for ataxia using antisense therapy, which specifically targets RNA molecules. “We are working on it,” she says, “and we do care. We are here and we are trying.”

Julio de Unamuno Founder and CEO, Lab Fellows Julio understands firsthand the urgency associated with bringing groundbreaking medicine to market. “My grandmother died of diabetes the same year Genentech approved Humulin [the first synthetic insulin],” Julio says. “That drug existed for years in a research lab, and it could have saved her.” Julio is the founder of Lab Fellows, a full-service lab concierge that helps labs of all sizes bring their science into the market. When he heard about the NAF, Julio jumped at the chance to join San Diego’s Select and bring attention to this relatively unknown condition. “I want to bring awareness to a disease that affects so many,” he says.

After losing her father to cancer and watching her mother battle breast cancer, Ashley took action, serving as the event chair for the American Cancer Society (ACS) Relay for Life at SDSU and now acting as a legislative ambassador for the ACS Cancer Action Network. An experienced fundraiser, Ashley cares deeply about social justice. She’s the chair of the Young Nonprofit Professionals Network and serves as a committee member of the local political action committee Run Women Run. “I want to inspire young people, raise awareness, and start formalizing fundraising for NAF,” Ashley says.

Born and raised in San Diego, Stephanie moved back in 2013 after living in Las Vegas and performing as a showgirl in Donn Arden’s Jubilee! and Les Folies Bergere. When she heard about the NAF and how little is known about ataxia, Stephanie jumped at the chance to join San Diego’s Select and help. “Ataxia needs more funding, more research and support,” she says. “I enjoy working with nonprofits and helping where I can. Ataxia affects so many more people than ‘popular’ diseases. I want to help get the word out, and build awareness.”

Kyle Heiskala Representative and Policy Advisor for Sherri Lightner, San Diego City Council “I’ve always had an interest in government and a passion for local government,” Kyle says about his career, which started when he was in high school as a Council District 1 office intern. Since then, Kyle has dedicated himself to improving his community, including an overhaul of UCSD’s student transit program. Today, Kyle continues to work on community and local politics, focusing on affordable housing, transportation, and the environment. He sees his involvement in the NAF as part of his drive to make the community of San Diego a better place and to help people in need.

D Common Symptoms The symptoms and time of onset of ataxia can vary, even within the same family who share the same type of ataxia.

› Trouble with balance and coordination,

especially with the hands, arms, and legs. As w alking becomes more difficult, people with ataxia often walk with their feet placed farther apart to compensate for poor balance.

› Slurring of speech, difficulty with tasks

D Diagnosing Ataxia An ataxia diagnosis is based on the patient’s medical history, family history, and a complete neurological evaluation, including an MRI scan of the brain. Blood tests can also be used to rule out other disorders. Genetic blood tests are also available for some types of hereditary ataxia.

D Treatment of Ataxia There is currently no medicine that specifically treats Ataxia, however the NAF is funding cuttingedge research to develop treatments. People with ataxia can see improvement from exercise and physical, occupational, and speech therapy. Adaptive devices can help those with ataxia retain independence, and medications can alleviate some of the symptoms.

Abel Gutierrez Account Manager, Thermo Fisher Scientiﬁc Visiting labs throughout his territory for his work as an account manager, Abel noticed something interesting. “These labs are studying the same pathways, and getting the same results,” he says.

This observation led Abel, who spent 12 years as a wet-lab scientist, to think about how studying “orphan diseases” can shed light on other diseases.

This father of two was touched by the stories he heard about people with ataxia who are misdiagnosed and misunderstood.

Most researchers never have a chance to meet the people whose lives they are working to improve, but the NAF provided a unique experience for Jackie to make a personal connection with her research.

“The emotional side got to me,” he says. Through his work with San Diego's Select and the NAF, he hopes to encourage understanding and awareness to help those who are suﬀering.

“At the annual NAF meeting I got to meet patients whose cells I was growing,” Jackie says. The patients were in awe of her work, and the feeling was mutual. “These are the people whose lives I could aﬀect,” she says. “It makes you work that much harder.”

Colleen Stoyas Sixth-Year PhD Student, UCSD Colleen Stoyas, whose interest in neurodegeneration led her to her work with ataxia, is in the midst of ﬁnishing her thesis on spinocerebellar ataxia type 7, a genetic form of the disease. Learning more about the condition, and meeting some of the 150,000 people who are aﬀected, has inspired Colleen in her work. “They have no treatment other than helping control their symptoms,” she says. “Nobody knows what they have.” Colleen’s grandfather had Alzheimer’s, and she’s seen the impact increased awareness and funding has had on that disease. Through her research and her work with the NAF, she hopes to bring attention—and, hopefully, relief—to those who are suﬀering.

Victor Brown Victor moved to San Diego when he was 13 and later attended UCSD, where he founded a chapter of a Christian organization and was on the board of the Black Student Union. Since graduation, Victor has worked for city council member Tony Young and the San Diego Workforce Partnership, and he was an employment counselor for Res-Care. He is now a ﬁeld representative for Speaker Emeritus Toni Atkins. “What better way to help people in need,” the 27-year-old says about raising funds and awareness for the NAF. “Any way I can brighten anyone’s life, I want to do that.”

It was 2002 when everything changed for Lisa. The 33-year-old elementary school teacher was a vibrant,

This year, she was honored with the “You Are

the Strength Behind Ataxia” award at the annual

participated in Outward Bound trips. In June of that year,

Lisa suddenly had trouble writing on the blackboard. Then her mother, Jane, noticed she had difficulty walking and talking. Visits to doctors all over the United States left the family with no answers. Finally, in 2003, Jane and Lisa attended a National Ataxia Foundation meeting and for the first time they didn’t feel alone. “It helped to speak to these families and ask questions,” Jane says. A blood test finally led to a diagnosis: spinocerebellar ataxia type 14. Jane immediately got

Jane remains hopeful about the search for a cure and treatment. When she accepted the award, her message was simple:

“Tell everybody. That’s how we’ll win this—when everybody cares.”

involved with the NAF. Now, 14 years later, Lisa uses a walker—or a wheelchair for long distances—and Jane is still hard at work raising money for the NAF and spreading the word about ataxia.

San Diego’s Select and help spread awareness, raise money, D Join and bring hope to those with ataxia in San Diego and worldwide. To learn more, get involved, or donate, visit ataxia.org. 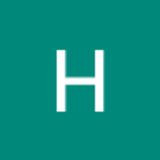