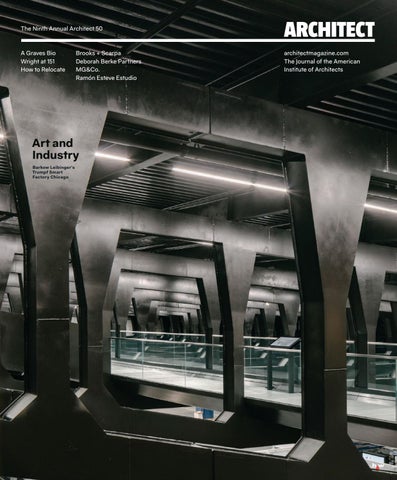 A Graves Bio Wright at 151 How to Relocate

architectmagazine.com The Journal of the American Institute of Architects

A new facility for the German machine and laser manufacturer showcases the precision of digital fabrication.

Previous Spread: View from south, with machine showroom at left

This Image: View from west, with entry at plaza

Drive the I-90 expressway northwest of Chicago’s O’Hare International Airport and you will start to notice, sprinkled in-between the blank warehouses and opaque office parks, a few buildings that face the highway with expanses of glass. Architect Frank Barkow, of Berlin’s Barkow Leibinger, calls them schaufenster, or display windows, and they advertise the wares of companies that produce the latest manufacturing tools. The companies fly in clients from around the country to see CNC milling machines and other robots at work. These buildings are neither factories nor showrooms, but hybrids, the industrial equivalent of the bedroom or living-room scenes Ikea installs in its retail locations: “Your manufacturing could look like this.” The Trumpf Smart Factory Chicago, which Barkow Leibinger designed for the German company Trumpf takes this type of building further: It displays architecture as well as machines. Barkow and his partner, Regine Leibinger, have designed many projects for Trumpf, which leads the charge in what the company calls “fourth generation” technology. (Leibinger’s family owns the company.) All of the duo’s projects for the machined-tools and laser manufacturer foreground structure to frame the machines that shape, cut, fold, and otherwise manipulate sheet metal. The designs themselves both honor the machines’ industrial heritage and carry the buildings into an altogether thinner, more precise, and more ethereal realm. Instead of heavy halls or anonymous boxes, Barkow Leibinger’s projects are temples of craft and precision. So it is with the $15 million, 57,000-square-foot Chicago project, which opened this summer. The main space is a loft in which rows of Vierendeel trusses march across the sloping ceiling. The trusses were cut and folded by Trumpf’s own machines and are much lacier than you might expect. The taller side of the space, which faces the highway along its length, is a glass window from which you can see the cars and trucks racing by—and they, in turn, can see inside the factory. The building’s façades are clad in a combination of Cor-Ten steel and charred Douglas fir: The rust might recall the factory’s industrial past, but it also elevates the factory’s appearance from the beigeand-bland stucco or corrugated metal faces that cloak most examples of the type. The Trumpf Smart Factory is more than a modern day machine hall. The whole building is an angular figure eight in plan: You enter where the two square forms meet, into an open-plan space that serves as a reception hall, and then turn either toward that loftlike room where the machines work silently and with almost no human intervention, or toward a courtyard

surrounded by metal beams on end. An office space at the far end of the courtyard accommodates an approximately 50-person sales and administration staff. The site is a fragment of an expansive campus that AT&amp;T built around preserved wetlands, and Barkow Leibinger made good use of the serene views. The portion of the building that surrounds the courtyard, its walls clad with the same Douglas fir as the entry, recalls a monastery cloister, with walkways around a rock garden dotted with a few trees. Its raw materials and colors, including a polished concrete floor, are modest, primitive in feel, and closely aligned in texture and color. Barkow says he was inspired in the design by Ludwig Mies van der Rohe’s collages of spaces, like the Chicago Convention Hall and the New National Gallery in Berlin, in which paintings hang in cavernous halls. He wanted to “recapture the clarity and the optimism of that kind of Modernism. … We shouldn’t be so afraid how things are made, how big they are, or even how they look.” Barkow also loves projects such as Eero Saarinen’s John Deere World Headquarters (finished by Kevin Roche John Dinkeloo and Associates) for its frank expression of steel and glass structure. For the Chicago facility, Barkow and his team concentrated on the “amazing precision” and the “almost inhuman beauty” that industrial processes these days can produce, boosted by machines such as Trumpf’s. “Ultimately, what I wanted to do was to explain technology,” he says. He also had a practical reason for the simplicity and openness of the design: A catwalk and small observation deck now string through the trusses in the machine hall, but the angular structural forms can be adapted for more office or display space; the hall can also be extended in a future expansion. Eventually, the whole complex could be double its current size. An American who has lived and worked in Germany for the last 30 years, Barkow still loves the muscle and messiness of the American landscape. “Look at these highway bridges,” he exclaims as we drive toward the site, “and the structure holding up those billboards and traffic signs. That is the real architecture here. It has none of the fakeness of the buildings: It is honest and clear and really big. I love that.” In the Trumpf Smart Factory Chicago, Barkow Leibinger captures the energy of the city that makes things, as it transitions into an age where humans watch over machines that operate by themselves. The design frames those new machines with clarity and economy, and also places them in context. Instead of dark Satanic Mills, Barkow Leibinger shows us factories as modern museums of industrial art.

Lobby, with stair to second-ﬂoor control center at left

View into auditorium from courtyard

Skywalk, with view to machine showroom below 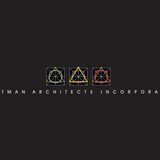