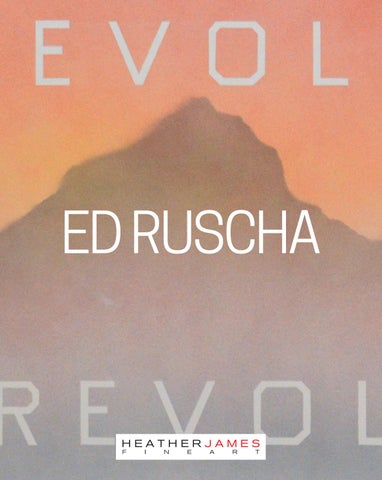 Ed Ruscha is one of the most distinguished American artists due in part for his explorations of the symbols of Americana and the relationship between language and art. He is perhaps best recognized for paintings incorporating words and phrases, or for his many photographic books, all influenced by the deadpan irreverence of the Pop Art movement. Ruscha employs words as images, taking phrases out of their original context and transforming them into subject matter. As with his East Coast Pop counterparts Andy Warhol and Roy Lichtenstein, Ruscha’s initial artistic training was in commercial art – a background evident in his iconic typographical works. In this painting from 2013, the words “Evolution Revolution” overlay a serene mountain silhouette. Describing his inspiration, Ruscha once said, “I like the idea of a word becoming a picture, almost leaving its body, then coming back and becoming a word again.”