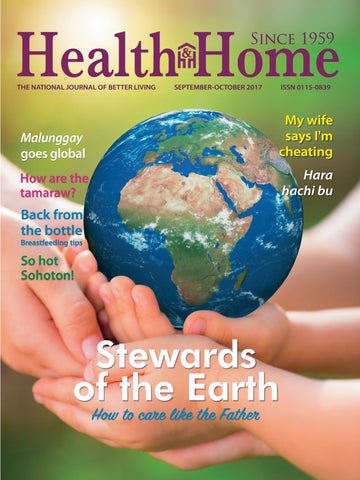 Since 1959 THE NATIONAL JOURNAL OF BETTER LIVING

Back from the bottle Breastfeeding tips

Stewards of the Earth How to care like the Father

28 From the Bottle Back to the Breast By Nona D. Andaya-Castillo How to restart breastfeeding

Losing sight was not the end

36 When God Made the Neurons By Rowena R. Antemano Growing, electrifying

14 A Letter From the Womb By Rod Arters When a child hears “abortion” 16 The Philippines’ Pride: Pili Nuts By Arlene May G. Corpus Beyond the humble pasalubong

23 Live Green on Your Holiday By WWF-Philippines

The earth is our home—big yet vulnerable. When God gave man dominion over His creation, along with it were the gifts of compassion and reason. Photos in this issue are by rogeRGSabio unless credited otherwise. Cover photo from 123rf.com.

Martin Luther: His Life and Legacy By Felixian T. Felicitas

The spark that lighted the world 500 years ago

A new heaven and a new earth

Traveling with the least environmental impact

35 Food for the Family

Caring for the Environment

Are Some Teeth Wiser Than Others?

44 Word for the World

The YOU in Humanity

Thoughts and notes expressing love and longing, regret and grief, appreciation and admiration; the depths of human emotions captured in the old art of letter writing.

A Letter From The Womb By ROD ARTERS

This is dedicated to a Christian friend of mine here in the US who is carrying an unplanned child out-of-wedlock. She is on the verge of making an irreversible, devastating, life-changing “choice.” If her unborn child was given a glimpse of life outside the womb and had the vocabulary to articulate thoughts, this is what her baby may write—a desperate plea to stay alive.

The Tamaraw and the Batangan By GREGG YAN

In celebration of Tamaraw Month, below is a story offering both an update on the conservation efforts for this buffalo species in Mindoro and a glimpse into the life of the indigenous people living in the tamaraw’s habitat.—Editor

t’s raining sheets in the Iglit-Baco National Park and we’re hunkered down in a thatched hut without a poncho. Inside we sit with three ancient Fufu-amas, elders of the Batangan, a tribe from Mindoro. They’re clad in loincloths while smoking a mysterious herb in wooden bak’to pipes. It’s supposedly tobacco, but it smells like something else. I’d last been back in 2012 to photograph the tamaraw, an endangered buffalo we’re working to conserve. I’ve returned to understand the plight of the Batangan, an indigenous tribe sharing the land with the tamaraw. “They wish to visit our village tomorrow to see our way of life,” translates elder Henry Timuyog for the others. We from the National Geographic Channel, Tamaraw Conservation Programme, and World Wide Fund for Nature (WWF) just gave them a shipment of solar lamps, which we hoped would cool ties and finally allow us outsiders, called Siganon, to visit one of their distant forest villages and see how else we can help. Old Fuldo Gonzales takes a puff and eases it out gently, contemplating a tamaraw skull beside him. After a long pause, he clears his throat and speaks in the tongue of the Batangan. “We shall discuss this more but be ready tomorrow morning—we shall meet you on the trail to Magawang.”

Batangan means “felled forest” and is among two names the tribe calls itself—the other being Taw’buid or “people from above.” Close to 20,000 inhabit

Toro or tamaraw bull are the largest, most powerful, and most fearsome of all tamaraw. It can charge without warning and chase their foes up to a kilometer.

From the Bottle Back to the Breast By NONA D. ANDAYA-CASTILLO

lmost three decades ago, in preparation for motherhood, I read books on natural birthing and breastfeeding. Having gone through so many illnesses and hospitalizations since I was a child, I was determined to breastfeed my baby, knowing its health benefits. When I gave birth at a hospital, I was separated from my baby and she was given artificial formula milk. Because I thought my milk

had dried up, I bottle-fed her for the next 15 days. Due to the changing hormones and not breastfeeding, postpartum blues easily crept in. Many times, I found myself crying, feeling awful for not being able to breastfeed. Fortunately, a friendâ&#x20AC;&#x2122;s phone call gave me the determination to go back to breastfeeding. I kept trying and I did it. My journey from 100 percent bottle-feeding

hen Yasuo Matsuoka, a Japanese businessman, was diagnosed with cirrhosis in 2014, he told his wife, a Filipina, that he didn’t want to take medications. He wanted something all-natural. “This affects the liver. If I take synthetic medicines, this will make the liver suffer more,” he said to his wife, Genara OlaisMatsuoka or Gena. She interprets for her husband. Incidentally, a family friend gave them dried malunggay seeds. Yasuo took 15 seeds each day: five in the morning, five at noon, and five at night. Later, he stopped counting and simply put the seeds on his pocket so he could crack and chew them throughout the day. When seeds were not available, he would take powdered moringa.

“After three months, we had his liver tested and it stayed the same, which is a significant development. His liver has something like a pimple and the sides are already drying up,” described Gena. This experience, along with the testimony of other people and their own scientific research, motivated the couple to share the wonders of this humble tropical tree to the rest of the world.

From giving to selling

At first, Gena just bought moringa supplements for her husband. She repacked the green powder into capsules for the family. Later, she started sharing these to friends. Some, however, came asking for more and expressed willingness to buy from her.

“My friends asked how much I was selling the capsules. Since I was not planning to make it into a business then, I still had to research the pricing,” she said animatedly while we sat in their office. After canvassing, she came up with PhP5 per capsule. Immediately, five people ordered 1,000 capsules each. Overwhelmed, she requested her helpers to don masks and hairnets to assist in their small-scale capsule production. Later, a Japanese friend of Yasuo called to ask if they knew of moringa oleifera. “I had no idea about malunggay’s scientific name. I only knew it to be malunggay or kamunggay in our province,” she recalled happily. She bought powdered moringa from a

Alluring Sohoton Text and Photos By JESS AND ERIC MONTALBAN

urigao del Norte consists of four islands, namely: Bucas Grande, Guyam, Hibuson, Kabo, and Siargao. Siargao is world-famous for its surfing waves with a reputation for thick, hollow tubes called “Cloud 9.” Bucas Grande, on the other hand, is slowly gaining traction as a tourist destination and draws hundreds of tourists with its crystal-clear lagoons and natural wonders. A visit to Bucas Grande won’t be complete without visiting Sohoton Cove National Park and Jellyfish Sanctuary.

Our first stop of the tour was Tondan Cave. We were quite excited at the start, but we got bored after the tour. The cave was not that huge and you could explore it in five minutes or less.

You might reconsider visiting Bolitas and Crystal Caves instead. Entrance is PhP30, inclusive of flashlight, helmet, and tour guide fees.

The original plan was to have our lunch at Cinnamon Island, but due to lack of time, we headed straight to Sohoton Tourist Center, a few minutes away from Tondan. After we docked, we transferred to a smaller boat to the tourist center. The local government-based tourist center collects fees for the following: • Entrance fee – PhP50 • Environmental fee – PhP50 (local tourist); PhP150 (foreigner) • Helmet and life vest usage – PhP80 • Guide fee – PhP330 (165 per guide, 2 guides per boat) • Pump boat – PhP500 (shared) • Jellyfish paddler – PhP100 • Docking fee – PhP100 Health & Home September-October 2017 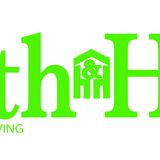 The National Journal of Better Living Since 1959

The National Journal of Better Living Since 1959