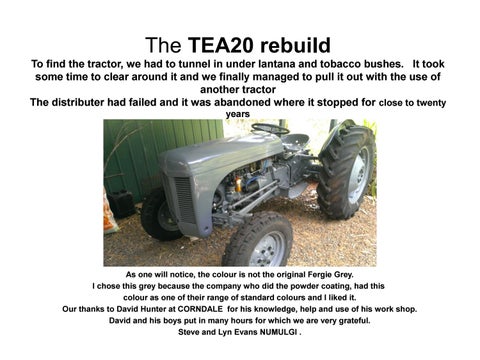 The TEA20 rebuild To find the tractor, we had to tunnel in under lantana and tobacco bushes. It took some time to clear around it and we finally managed to pull it out with the use of another tractor The distributer had failed and it was abandoned where it stopped for close to twenty years

As one will notice, the colour is not the original Fergie Grey. I chose this grey because the company who did the powder coating, had this colour as one of their range of standard colours and I liked it. Our thanks to David Hunter at CORNDALE for his knowledge, help and use of his work shop. David and his boys put in many hours for which we are very grateful. Steve and Lyn Evans NUMULGI .

The compliance plate We removed the plate and although hard to read, I was able to scan it to identify and overprint the wording. The tractor was made in England, there were two types of petrol engines that I know of used in the T20â&amp;#x20AC;&amp;#x2122;s, the Continental and Standard, the plate identifies the motor in this one as made by The Standard Motor Company and I believe it is a Vanguard engine .

I regret not taking more photos from the day we found the tractor. I never thought of doing a presentation of the journey to bring this â&amp;#x20AC;&amp;#x153;old Timerâ&amp;#x20AC;? back to life

We took the motor off, it was impossible to turn over. Why, well it may have something to do with the ants nest in the head and the first two cylinders. We sprayed the ants and removed most of the dirt. The motor then went into Lismore where a mechanic had the job of cleaning it up and rebuilding the engine (he earned his money on this one). The radiator was just as bad with ants and was sent out to be cleaned, the clutch housing was also home to another nest. The clutch was covered in rust and was replaced..

This is as far as we went in the strip down. The diff checked out okay so we cleaned out the rear end housing ready to start the rebuild

The bolts actually broke as we tried to undo them to take the guards apart. After sandblasting and powder coated, we used stainless steel bolts to reassemble them.

The top bar was badly rusted, we replaced it before painting.

The bonnet was pulled apart, repaired and repainted, no more holes or dents, All the nuts and bolts had to be ground off as they were too badly rusted. All the repair work was done by myself and the spray painting was done by David.

Sad looking gearbox We removed all the gears and some very questionable oil (light mud brown in colour). Then with the use of a Pressure washer, we cleaned the inside Although we found some areas inside badly pitted from water, there were no deep holes and after the cleaning the inside looked okay. The gears were in good condition and were reassembled in the gearbox housing with new bearings.

Out with the old look............in with the new look We purchased a small sandblasting cabinet and made good use of it.

Front end assembly was pulled apart and sent out for sandblasting plus powder coating. the same was done for the steering assembly. We added two new gauges, we now have an ammeter, oil pressure and water temperature gauge (new steering wheel was purchased).

We decided to replace the starter switch and the wiring harness, they had both seen better days.

The air cleaner. Inside was okay, just needed a good clean. The outside needed holes like this to be repaired.

Our first step in the rebuild. The rear end was cleaned out and with the Hydraulic pump checked, it was the first item back in.

The gearbox, motor and front end were reassembled, next the steering assembly, exhaust and radiator.

we changed the electrical system to negative earth and added an electronic ignition system then added the petrol tank. Next the bonnet, the wheel guards and the roll over protection bars were put back in place. The rear axles had new bearings and seals and the brakes had new linings fitted. Evan after some twenty years in the paddock, the rear wheels and tires looked okay, so we had the rims sand blasted and powder coated, then the tires refitted with new tubes, the front ones were no good, so we replaced the rims and tires

Finally, the road (farm) test My test drivers are Breana, Matthew and Brendan who took turns in driving the tractor around the farm

The TEA20 is now back home, it wasn&#39;t long and we decided to do an alternator conversion. Our tractor uses the wider fan belt so I needed to change to the pulley that was supplied in the kit. The kit supplied had an alternator, extra wiring harness, wide pulley and instructions. I had a problem with the new pulley, when fitted, there was not much shaft showing so the nut only went on approx. 2mm. The problem is caused by the thickness on the wider pulley. (see next page)

The extra modifications I made to fit the alternator to our TEA20. The original fan belt did not fit, it is a bare-co belt 20 x 1040 we purchased a longer belt, It was a different brand, a little stiffer but identical in shape, the measurements of the belt are 20 x 1090 and with a bit of force, went over the alternator pulley we still had approx. 25mm of adjustment left on the arm for tensioning The kit supplied is B8810 from Bare-Co for petrol engines (for diesel engines it is B8811) I machined out approximately 7mm as I had damaged the thread on the end of the shaft, otherwise I would have only machined out 5mm In the narrow pulley this is 10mm

I noticed that the pulley on the generator before removing it, was not quite in line with the other pulleys. To overcome this, I elongated The holes B1 and B2 in the mounting bracket to allow side movement in lining up the pulleys. I used washers between the mounting bracket and the housing as spacers at Bolt 3. I purchased two bolts 1/8 th and 1/4 inch longer and depending on the spacing, I used the bolt to suit .

This is the wiring diagram that I designed and followed in order to wire up the ammeter and alternator. I wired in the new harness according to the instruction that came with the kit. The charge indicator and ammeter are close to together which suites the extra wiring harness (New red and Yellow) provided in the kit, the discarded wires I cut back as far as I could and taped the ends up. The negative earth cable, I earthed it to one of the steering housing bolts directly under the battery, it was convenient and easier to get to.