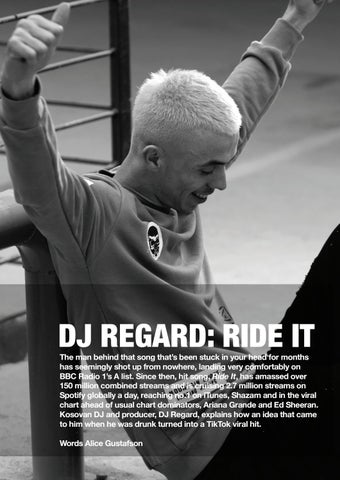 DJ REGARD: RIDE IT

The man behind that song thatâ&#x20AC;&#x2122;s been stuck in your head for months has seemingly shot up from nowhere, landing very comfortably on BBC Radio 1â&#x20AC;&#x2122;s A list. Since then, hit song, Ride It, has amassed over 150 million combined streams and is cruising 2.7 million streams on Spotify globally a day, reaching no.1 on iTunes, Shazam and in the viral chart ahead of usual chart dominators, Ariana Grande and Ed Sheeran. Kosovan DJ and producer, DJ Regard, explains how an idea that came to him when he was drunk turned into a TikTok viral hit. Words Alice Gustafson