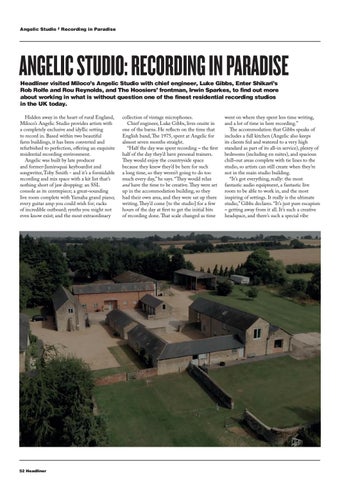 ANGELIC STUDIO: RECORDING IN PARADISE Headliner visited Miloco’s Angelic Studio with chief engineer, Luke Gibbs, Enter Shikari’s Rob Rolfe and Rou Reynolds, and The Hoosiers’ frontman, Irwin Sparkes, to find out more about working in what is without question one of the finest residential recording studios in the UK today.

Hidden away in the heart of rural England, Miloco’s Angelic Studio provides artists with a completely exclusive and idyllic setting to record in. Based within two beautiful farm buildings, it has been converted and refurbished to perfection, offering an exquisite residential recording environment. Angelic was built by late producer and former-Jamiroquai keyboardist and songwriter, Toby Smith - and it’s a formidable recording and mix space with a kit list that’s nothing short of jaw dropping: an SSL console as its centrepiece; a great-sounding live room complete with Yamaha grand piano; every guitar amp you could wish for; racks of incredible outboard; synths you might not even know exist; and the most extraordinary

collection of vintage microphones. Chief engineer, Luke Gibbs, lives onsite in one of the barns. He reflects on the time that English band, The 1975, spent at Angelic for almost seven months straight. “Half the day was spent recording – the first half of the day they’d have personal trainers. They would enjoy the countryside space because they knew they’d be here for such a long time, so they weren’t going to do too much every day,” he says. “They would relax and have the time to be creative. They were set up in the accommodation building, so they had their own area, and they were sat up there writing. They’d come [to the studio] for a few hours of the day at first to get the initial bits of recording done. That scale changed as time

went on where they spent less time writing, and a lot of time in here recording.” The accommodation that Gibbs speaks of includes a full kitchen (Angelic also keeps its clients fed and watered to a very high standard as part of its all-in service), plenty of bedrooms (including en suites), and spacious chill-out areas complete with tie lines to the studio, so artists can still create when they’re not in the main studio building. “It’s got everything, really: the most fantastic audio equipment, a fantastic live room to be able to work in, and the most inspiring of settings. It really is the ultimate studio,” Gibbs declares. “It’s just pure escapism – getting away from it all. It’s such a creative headspace, and there’s such a special vibe