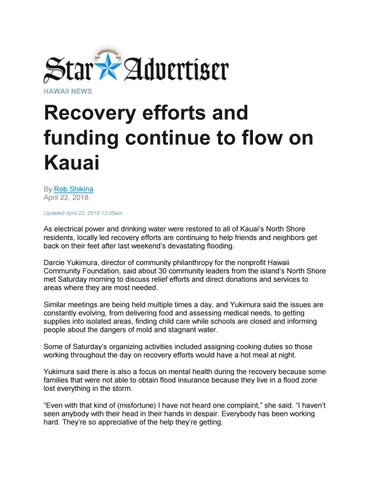 As electrical power and drinking water were restored to all of Kauai’s North Shore residents, locally led recovery efforts are continuing to help friends and neighbors get back on their feet after last weekend’s devastating flooding. Darcie Yukimura, director of community philanthropy for the nonprofit Hawaii Community Foundation, said about 30 community leaders from the island’s North Shore met Saturday morning to discuss relief efforts and direct donations and services to areas where they are most needed. Similar meetings are being held multiple times a day, and Yukimura said the issues are constantly evolving, from delivering food and assessing medical needs, to getting supplies into isolated areas, finding child care while schools are closed and informing people about the dangers of mold and stagnant water. Some of Saturday’s organizing activities included assigning cooking duties so those working throughout the day on recovery efforts would have a hot meal at night. Yukimura said there is also a focus on mental health during the recovery because some families that were not able to obtain flood insurance because they live in a flood zone lost everything in the storm. “Even with that kind of (misfortune) I have not heard one complaint,” she said. “I haven’t seen anybody with their head in their hands in despair. Everybody has been working hard. They’re so appreciative of the help they’re getting.

“This community is completely resilient. I am just so proud to be from Kauai.” Also Saturday, Kauai police and firefighters went door to door in Wainiha and Haena on the North Shore to inform residents of a community meeting today, from 11:30 a.m. to 1:30 p.m., at the Hanalei Colony Resort. Mayor Bernard Carvalho Jr. will give updates on relief efforts, recovery plans, available resources and the condition of the community’s infrastructure. County teams conducted damage assessments Saturday in Hanalei, Wainiha and Haena. Nonemergency airlift operations ended Saturday, with about 475 people evacuated by air since Monday, the county said. Police were reminding the public that Kuhio Highway was closed between Waikoko and Wainiha as crews work to clear multiple landslides. Kauai County spokeswoman Sarah Blane said police reported that people were trying to access the area with all-terrain vehicles after hearing that officials were planning to open one lane of the highway. However, that is not expected to happen until at least May 7 and in the meantime, all parts of the highway are closed in the area until further notice. “We have officers stationed in the area and are on the lookout for anyone attempting to traverse the area,” said Deputy police Chief Michael Contrades in a news release. “This type of activity will only further delay the opening of the highway to the public.” The Hawaii Community Foundation on Friday provided grants to the Aloha School Early Learning Center and ‘Aina Ho‘okupu o Kilauea through the Kauai Relief and Recovery Fund. Aloha School, a nonprofit preschool in Hanalei, will use the funding to repair damage and offer reduced tuition for families hit by flooding, and ‘Aina Ho‘okupu will continue helping to clear roads and property on the North Shore. The foundation created the relief fund in partnership with Honolulu philanthropists Pierre and Pam Omidyar, who contributed $100,000 in seed money, and has raised more than $600,000 from at least 140 donors, including Facebook founder Mark Zuckerberg and his wife, Priscilla Chan, who own land on Kauai. Friday’s grants brought the total amount distributed so far to $160,000 for five organizations. The foundation started distributing grants from the relief fund within 24 hours after it was created. Visit the foundation’s website to donate.