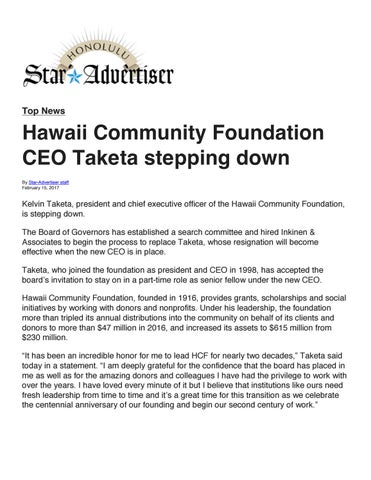 Kelvin Taketa, president and chief executive officer of the Hawaii Community Foundation, is stepping down. The Board of Governors has established a search committee and hired Inkinen & Associates to begin the process to replace Taketa, whose resignation will become effective when the new CEO is in place. Taketa, who joined the foundation as president and CEO in 1998, has accepted the board’s invitation to stay on in a part-time role as senior fellow under the new CEO. Hawaii Community Foundation, founded in 1916, provides grants, scholarships and social initiatives by working with donors and nonprofits. Under his leadership, the foundation more than tripled its annual distributions into the community on behalf of its clients and donors to more than $47 million in 2016, and increased its assets to $615 million from $230 million. “It has been an incredible honor for me to lead HCF for nearly two decades,” Taketa said today in a statement. “I am deeply grateful for the confidence that the board has placed in me as well as for the amazing donors and colleagues I have had the privilege to work with over the years. I have loved every minute of it but I believe that institutions like ours need fresh leadership from time to time and it’s a great time for this transition as we celebrate the centennial anniversary of our founding and begin our second century of work.”