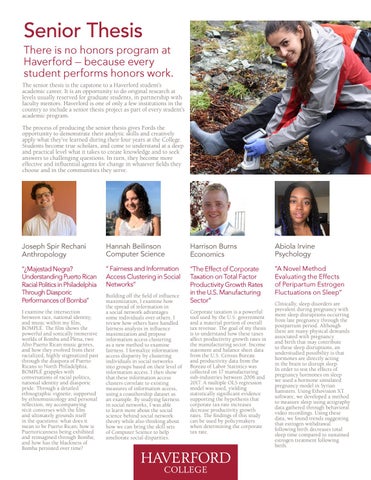 There is no honors program at Haverford — because every student performs honors work. The senior thesis is the capstone to a Haverford student’s academic career. It is an opportunity to do original research at levels usually reserved for graduate students, in partnership with faculty mentors. Haverford is one of only a few institutions in the country to include a senior thesis project as part of every student’s academic program. The process of producing the senior thesis gives Fords the opportunity to demonstrate their analytic skills and creatively apply what they’ve learned during their four years at the College. Students become true scholars, and come to understand at a deep and practical level what it takes to create knowledge and to seek answers to challenging questions. In turn, they become more effective and influential agents for change in whatever fields they choose and in the communities they serve.

“The Effect of Corporate Taxation on Total Factor Productivity Growth Rates in the U.S. Manufacturing Sector”

I examine the intersection between race, national identity, and music within my film, BOMPLÉ. The film shows the powerful and sonically immersive worlds of Bomba and Plena, two Afro Puerto Rican music genres, and how they evolved from their racialized, highly stigmatized past through the diaspora of Puerto Ricans to North Philadelphia. BOMPLÉ grapples with conversations of racial politics, national identity and diasporic pride. Through a detailed ethnographic vignette, supported by ethnomusicology and personal reflection, my accompanying récit converses with the film and ultimately grounds itself in the questions: what does it mean to be Puerto Rican; how is Puertoricanness being exhibited and reimagined through Bomba; and how has the blackness of Bomba persisted over time?

Corporate taxation is a powerful tool used by the U.S. government and a material portion of overall tax revenue. The goal of my thesis is to understand how these taxes affect productivity growth rates in the manufacturing sector. Income statement and balance sheet data from the U.S. Census Bureau and productivity data from the Bureau of Labor Statistics was collected on 17 manufacturing sub-industries between 2006 and 2017. A multiple OLS regression model was used, yielding statistically significant evidence supporting the hypothesis that corporate tax rate increases decrease productivity growth rates. The findings of this study can be used by policymakers when determining the corporate tax rate.

Clinically, sleep disorders are prevalent during pregnancy with more sleep disruptions occurring from late pregnancy through the postpartum period. Although there are many physical demands associated with pregnancy and birth that may contribute to these sleep disruptions, an understudied possibility is that hormones are directly acting in the brain to disrupt sleep. In order to test the effects of pregnancy hormones on sleep we used a hormone simulated pregnancy model in Syrian hamsters. Using Ethovision XT software, we developed a method to measure sleep using actigraphy data gathered through behavioral video recordings. Using these data, we found trends suggesting that estrogen withdrawal following birth decreases total sleep time compared to sustained estrogen treatment following birth.

“Slumming in LateVictorian London: Evolving Discourse on Poverty and Philanthropy”

“At the Foot of Babel: Derrida, St. Paul, and a Question of Translation”

Seth Koven, the author of Slumming: Sexual and Social Politics in Victorian London, defined slumming as “activities undertaken by people of wealth, social standing, or education in urban spaces inhabited by the poor,” throughout the century before World War II. Undeniably, the slumming experiences influenced and shaped how the elites represented the urban poor, perceived social problems, and developed solutions to them. In this thesis, I seek to argue that the slumming experiences of missionaries, social reformers, and journalists contributed to form a joint narrative on poverty and philanthropy. This narrative increased public awareness of urban poverty, encouraged an examination of structural inequalities instead of individual temperaments as the cause of social problems, and resulted in development of philanthropic institutions to accommodate for neglect in government.

With the burgeoning climate crisis becoming a more salient issue amongst the voting public and environmental policy advocates, there is no debate that the negative effects of natural disasters are inherently political. While disasters may be stimulated by natural events, they take place in human spaces, have impacts that reflect social inequality, and exacerbate preexisting social inequities. In recent years, attention has turned increasingly to hazard mitigation as a way of protecting the American people from losses caused by natural disasters. My thesis investigates how one of America’s most destructive hurricanes was greeted by recovery policy agenda setting. I explore what was learned from the implementation of disaster recovery policies directly affecting disaster victims.

Students come to Haverford for a richly intellectual and engaging academic experience based around close student-faculty collaboration and direct engagement with ideas, issues, and questions. The senior thesis represents the culmination of a Haverford student’s academic experience, and is one of the most important and rewarding ways that Haverford realizes its educational mission.

Over the course of the 20th century, sustained focus on matters of language inevitably brought translation to the fore. As a normative conception of translation emerged, so too did its critics, chief among them Jacques Derrida. This essay re-examines Derrida’s critique of the normative conception of language through an analysis of his essay, “Des Tours de Babel.” Two prominent themes emerge in this essay: the proper name and the law. I argue that Derrida ultimately cannot escape a lawbased conception of language, and therefore fails to see the extent of the damage done by law, given its dominating tendencies. Using resources found in St. Paul’s writings, I argue that a full critique of the law as the basis for translation enables us to see a fundamentally new picture of language, one in which the nonviolent apprehension of linguistic difference becomes a real possibility, instead of the shadow of a promise.

These are just a few examples of projects by members of the Class of 2020. They represent the depth of intellectual engagement and diversity of interests that define the liberal arts at Haverford. See a full list of the Class of 2020’s Thesis projects at haverford.edu/class-of-2020#program 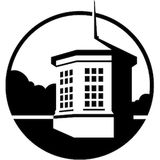 The senior thesis is the capstone to a Haverford student’s academic career. It is an opportunity to do original research at levels usually r...

The senior thesis is the capstone to a Haverford student’s academic career. It is an opportunity to do original research at levels usually r...