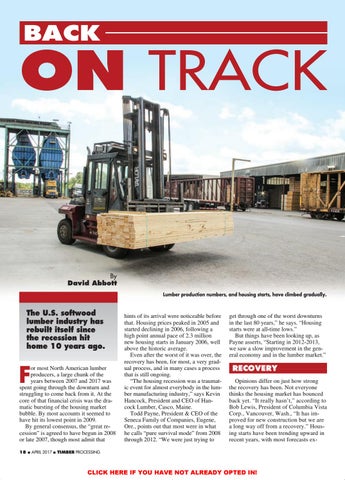 The U.S. softwood lumber industry has rebuilt itself since the recession hit home 10 years ago.

or most North American lumber producers, a large chunk of the years between 2007 and 2017 was spent going through the downturn and struggling to come back from it. At the core of that financial crisis was the dramatic bursting of the housing market bubble. By most accounts it seemed to have hit its lowest point in 2009. By general consensus, the “great recession” is agreed to have begun in 2008 or late 2007, though most admit that 18

hints of its arrival were noticeable before that. Housing prices peaked in 2005 and started declining in 2006, following a high point annual pace of 2.3 million new housing starts in January 2006, well above the historic average. Even after the worst of it was over, the recovery has been, for most, a very gradual process, and in many cases a process that is still ongoing. “The housing recession was a traumatic event for almost everybody in the lumber manufacturing industry,” says Kevin Hancock, President and CEO of Hancock Lumber, Casco, Maine. Todd Payne, President & CEO of the Seneca Family of Companies, Eugene, Ore., points out that most were in what he calls “pure survival mode” from 2008 through 2012. “We were just trying to

get through one of the worst downturns in the last 80 years,” he says. “Housing starts were at all-time lows.” But things have been looking up, as Payne asserts, “Starting in 2012-2013, we saw a slow improvement in the general economy and in the lumber market.”

RECOVERY Opinions differ on just how strong the recovery has been. Not everyone thinks the housing market has bounced back yet. “It really hasn’t,” according to Bob Lewis, President of Columbia Vista Corp., Vancouver, Wash., “It has improved for new construction but we are a long way off from a recovery.” Housing starts have been trending upward in recent years, with most forecasts ex-

CLICK HERE IF YOU HAVE NOT ALREADY OPTED IN!

The April 2017 issue of Timber Processing.

The April 2017 issue of Timber Processing.