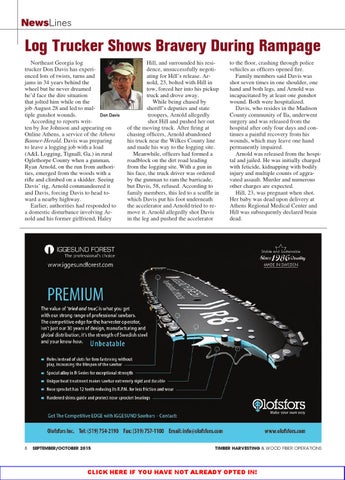 Log Trucker Shows Bravery During Rampage Northeast Georgia log trucker Don Davis has experienced lots of twists, turns and jams in 34 years behind the wheel but he never dreamed he’d face the dire situation that jolted him while on the job August 28 and led to multiple gunshot wounds. Don Davis According to reports written by Joe Johnson and appearing on Online Athens, a service of the Athens Banner-Herald, Davis was preparing to leave a logging job with a load (A&L Logging, Tignall, Ga.) in rural Oglethorpe County when a gunman, Ryan Arnold, on the run from authorities, emerged from the woods with a rifle and climbed on a skidder. Seeing Davis’ rig, Arnold commandeered it and Davis, forcing Davis to head toward a nearby highway. Earlier, authorities had responded to a domestic disturbance involving Arnold and his former girlfriend, Haley

Hill, and surrounded his residence, unsuccessfully negotiating for Hill’s release. Arnold, 23, bolted with Hill in tow, forced her into his pickup truck and drove away. While being chased by sheriff’s deputies and state troopers, Arnold allegedly shot Hill and pushed her out of the moving truck. After firing at chasing officers, Arnold abandoned his truck near the Wilkes County line and made his way to the logging site. Meanwhile, officers had formed a roadblock on the dirt road leading from the logging site. With a gun in his face, the truck driver was ordered by the gunman to ram the barricade, but Davis, 58, refused. According to family members, this led to a scuffle in which Davis put his foot underneath the accelerator and Arnold tried to remove it. Arnold allegedly shot Davis in the leg and pushed the accelerator

to the floor, crashing through police vehicles as officers opened fire. Family members said Davis was shot seven times in one shoulder, one hand and both legs, and Arnold was incapacitated by at least one gunshot wound. Both were hospitalized. Davis, who resides in the Madison County community of Ila, underwent surgery and was released from the hospital after only four days and continues a painful recovery from his wounds, which may leave one hand permanently impaired. Arnold was released from the hospital and jailed. He was initially charged with feticide, kidnapping with bodily injury and multiple counts of aggravated assault. Murder and numerous other charges are expected. Hill, 23, was pregnant when shot. Her baby was dead upon delivery at Athens Regional Medical Center and Hill was subsequently declared brain dead.

CLICK HERE IF YOU HAVE NOT ALREADY OPTED IN! THseptoct15pg_cs.indd 8