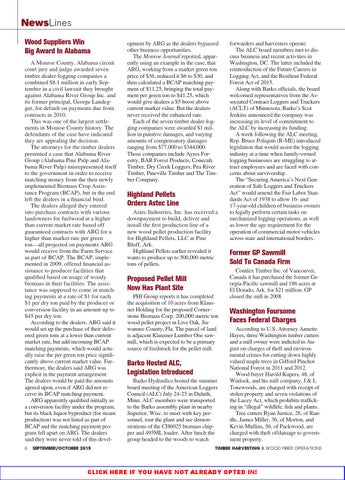 NewsLines Wood Suppliers Win Big Award In Alabama A Monroe County, Alabama circuit court jury and judge awarded seven timber dealer-logging companies a combined $8.1 million in early September in a civil lawsuit they brought against Alabama River Group Inc. and its former principal, George Landegger, for default on payments due from contracts in 2010. This was one of the largest settlements in Monroe County history. The defendants of the case have indicated they are appealing the decision. The attorneys for the timber dealers presented a case that Alabama River Group (Alabama Pine Pulp and Alabama River Pulp) misrepresented itself to the government in order to receive matching money from the then newly implemented Biomass Crop Assistance Program (BCAP), but in the end left the dealers in a financial bind. The dealers alleged they entered into purchase contracts with various landowners for fuelwood at a higher than current market rate based off guaranteed contracts with ARG for a higher than market rate per green ton—all projected on payments ARG would receive from the Farm Service as part of BCAP. The BCAP, implemented in 2009, offered financial assistance to producer facilities that qualified based on usage of woody biomass in their facilities. The assistance was supposed to come in matching payments at a rate of $1 for each $1 per dry ton paid by the producer or conversion facility in an amount up to $45 per dry ton. According to the dealers, ARG said it would set up the purchase of their delivered green tons at a lower than current market rate, but add incoming BCAP matching payments, which would actually raise the per green ton price significantly above current market value. Furthermore, the dealers said ARG was explicit in the payment arrangement: The dealers would be paid the amounts agreed upon, even if ARG did not receive its BCAP matching payment. ARG apparently qualified initially as a conversion facility under the program, but its black liquor byproduct (for steam production) was not listed as part of BCAP and the matching payment program fell apart on ARG. The dealers said they were never told of this devel6

opment by ARG as the dealers bypassed other business opportunities. The Monroe Journal reported, apparently using an example in the case, that ARG, working from a market green ton price of $36, reduced it $6 to $30, and then calculated a BCAP matching payment of $11.25, bringing the total payment per green ton to $41.25, which would give dealers a $5 boost above current market value. But the dealers never received the enhanced rate. Each of the seven timber dealer-logging companies were awarded $1 million in punitive damages, and varying amounts of compensatory damages ranging from $77,000 to $344,000. Those companies include Ayres Forestry, BAR Forest Products, Conecuh Timber, Dry Creek Loggers, Pea River Timber, Pineville Timber and The Timber Company.

Proposed Pellet Mill Now Has Plant Site PHI Group reports it has completed the acquisition of 10 acres from Klausner Holding for the proposed Cornerstone Biomass Corp. 200,000 metric ton wood pellet project in Live Oak, Suwannee County, Fla. The parcel of land is adjacent Klausner Lumber One sawmill, which is expected to be a primary source of feedstock for the pellet mill.

Barko Hosted ALC, Legislation Introduced Barko Hydraulics hosted the summer board meeting of the American Loggers Council (ALC) July 24-25 in Duluth, Minn. ALC members were transported to the Barko assembly plant in nearby Superior, Wisc. to meet with key personnel, tour the plant and see demonstrations of the CH6025 biomass chipper and 495ML loader. After lunch the group headed to the woods to watch

forwarders and harvesters operate. The ALC board members met to discuss business and recent activities in Washington, DC. The latter included the reintroduction of the Future Careers in Logging Act, and the Resilient Federal Forest Act of 2015. Along with Barko officials, the board welcomed representatives from the Associated Contract Loggers and Truckers (ACLT) of Minnesota. Barko’s Scot Jenkins announced the company was increasing its level of commitment to the ALC by increasing its funding. A week following the ALC meeting, Rep. Bruce Poliquin (R-ME) introduced legislation that would assist the logging industry at a time when family-owned logging businesses are struggling to attract employees and are faced with concerns about survivorship. The “Securing America’s Next Generation of Safe Loggers and Truckers Act” would amend the Fair Labor Standards Act of 1938 to allow 16- and 17-year-old children of business owners to legally perform certain tasks on mechanized logging operations, as well as lower the age requirement for the operation of commercial motor vehicles across state and international borders.

Former GP Sawmill Sold To Canada Firm Conifex Timber Inc. of Vancouver, Canada it has purchased the former Georgia-Pacific sawmill and 186 acres at El Dorado, Ark. for $21 million. GP closed the mill in 2008.

Washington Foursome Faces Federal Charges According to U.S. Attorney Annette Hayes, three Washington timber cutters and a mill owner were indicted in August on charges of theft and environmental crimes for cutting down highly valued maple trees in Gifford Pinchot National Forest in 2011 and 2012. Wood buyer Harold Kupers, 48, of Winlock, and his mill company, J & L Tonewoods, are charged with receipt of stolen property and seven violations of the Lacey Act, which prohibits trafficking in “illegal” wildlife, fish and plants. Tree cutters Ryan Justice, 28, of Randle, James Miller, 36, of Morton, and Kevin Mullins, 56, of Packwood, are charged with theft of/damage to government property.

CLICK HERE IF YOU HAVE NOT ALREADY OPTED IN! THseptoct15pg_cs.indd 6