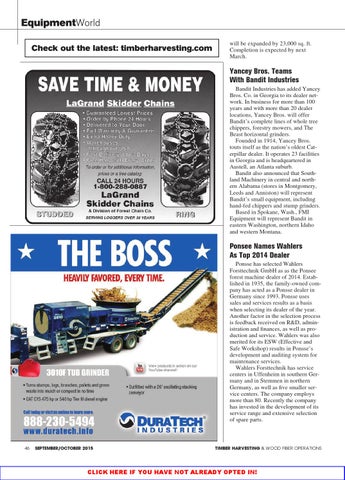 will be expanded by 23,000 sq. ft. Completion is expected by next March.

Yancey Bros. Teams With Bandit Industries Bandit Industries has added Yancey Bros. Co. in Georgia to its dealer network. In business for more than 100 years and with more than 20 dealer locations, Yancey Bros. will offer Bandit’s complete lines of whole tree chippers, forestry mowers, and The Beast horizontal grinders. Founded in 1914, Yancey Bros. touts itself as the nation’s oldest Caterpillar dealer. It operates 23 facilities in Georgia and is headquartered in Austell, an Atlanta suburb. Bandit also announced that Southland Machinery in central and northern Alabama (stores in Montgomery, Leeds and Anniston) will represent Bandit’s small equipment, including hand-fed chippers and stump grinders. Based in Spokane, Wash., FMI Equipment will represent Bandit in eastern Washington, northern Idaho and western Montana.

Ponsee Names Wahlers As Top 2014 Dealer Ponsse has selected Wahlers Forsttechnik GmbH as as the Ponsee forest machine dealer of 2014. Established in 1935, the family-owned company has acted as a Ponsse dealer in Germany since 1993. Ponsse uses sales and services results as a basis when selecting its dealer of the year. Another factor in the selection process is feedback received on R&D, administration and finances, as well as production and service. Wahlers was also merited for its ESW (Effective and Safe Workshop) results in Ponsse’s development and auditing system for maintenance services. Wahlers Forsttechnik has service centers in Uffenheim in southern Germany and in Stemmen in northern Germany, as well as five smaller service centers. The company employs more than 80. Recently the company has invested in the development of its service range and extensive selection of spare parts.

CLICK HERE IF YOU HAVE NOT ALREADY OPTED IN! THoct15pgs_SS.indd 46