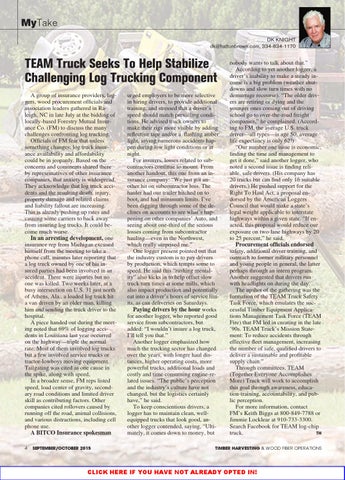 TEAM Truck Seeks To Help Stabilize Challenging Log Trucking Component A group of insurance providers, loggers, wood procurement officials and association leaders gathered in Raleigh, NC in late July at the bidding of locally-based Forestry Mutual Insurance Co. (FM) to discuss the many challenges confronting log trucking. Officials of FM fear that unless something changes, log truck insurance availability and affordability could be in jeopardy. Based on the concerns and comments shared there by representatives of other insurance companies, that anxiety is widespread. They acknowledge that log truck accidents and the resulting death, injury, property damage and related claims and liability fallout are increasing. This is already pushing up rates and causing some carriers to back away from insuring log trucks. It could become much worse. In an arresting development, one insurance rep from Michigan excused himself from the meeting to take a phone call, minutes later reporting that a log truck owned by one of his insured parties had been involved in an accident. There were injuries but no one was killed. Two weeks later, at a busy intersection on U.S. 31 just north of Athens, Ala., a loaded log truck hit a van driven by an older man, killing him and sending the truck driver to the hospital. A piece handed out during the meeting noted that 69% of logging accidents in Louisiana last year occurred on the highway—triple the normal rate. Most of them involved log trucks but a few involved service trucks or tractor-lowboys moving equipment. Tailgating was cited as one cause in the spike, along with speed, In a broader sense, FM reps listed speed, load center of gravity, secondary road conditions and limited driver skill as contributing factors. Other companies cited rollovers caused by running off the road, animal collisions, and various distractions, including cell phone use. A BITCO Insurance spokesman 4

urged employers to be more selective in hiring drivers, to provide additional training, and stressed that a driver’s speed should match prevailing conditions. He advised truck owners to make their rigs more visible by adding reflective tape and/or a flashing amber light, saying numerous accidents happen during low light conditions or at night. For insurers, losses related to subcontractors continue to mount. From another handout, this one from an insurance company: “We just got another hit on subcontractor loss. The hauler had our trailer hitched on to boot, and had minimum limits. I’ve been digging through some of the declines on accounts to see what’s happening on other companies’ Auto, and seeing about one-third of the serious losses coming from subcontractor hauling—even in the Northwest, which really surprised me.” One logger present pointed out that the industry custom is to pay drivers by production, which tempts some to speed. He said this “rushing mentality” also kicks in to help offset slow truck turn times at some mills, which also impact production and potentially eat into a driver’s hours of service limits, as can deliveries on Saturdays. Paying drivers by the hour works for another logger, who reported good service from subcontractors, but added: “I wouldn’t insure a log truck, I’ll tell you that.” Another logger emphasized how much the trucking sector has changed over the years, with longer haul distances, higher operating costs, more powerful trucks, additional loads and costly and time consuming engine-related issues. “The public’s perception and the industry’s culture have not changed, but the logistics certainly have,” he said. To keep conscientious drivers, a logger has to maintain clean, wellequipped trucks that look good, another logger contended, saying, “Ultimately, it comes down to money, but

nobody wants to talk about that.” According to yet another logger, a driver’s inability to make a steady income is a big problem (weather shutdowns and slow turn times with no demurrage recourse). “The older drivers are retiring or dying and the younger ones coming out of driving school go to over-the-road freight companies,” he complained. (According to FM, the average U.S. truck driver—all types—is age 50; average life expectancy is only 62!) “Our number one issue is economic; finding the time and management to get it done,” said another logger, who noted a second issue is finding reliable, safe drivers. (His company has 20 trucks but can find only 16 suitable drivers.) He pushed support for the Right To Haul Act, a proposal endorsed by the American Loggers Council that would make a state’s legal weight applicable to interstate highways within a given state. “If enacted, this proposal would reduce our exposure on two-lane highways by 20 to 25 percent,” he said. Procurement officials endorsed safety, additional driver training, and outreach to former military personnel and young people in general, the latter perhaps through an intern program. Another suggested that drivers run with headlights on during the day. The upshot of the gathering was the formation of the TEAM Truck Safety Task Force, which emulates the successful Timber Equipment Applications Management Task Force (TEAM Fire) that FM led in creating in the late ’90s. TEAM Truck’s Mission Statement: To reduce accidents through effective fleet management, increasing the number of safe, qualified drivers to deliver a sustainable and profitable supply chain.” Through committees, TEAM (Together Everyone Accomplishes More) Truck will work to accomplish this goal through awareness, education-training, accountability, and public perception. For more information, contact FM’s Keith Biggs at 800-849-7788 or Jimmie Locklear at 910-733-3300. Search Facebook for TEAM log-chip TH truck.

CLICK HERE IF YOU HAVE NOT ALREADY OPTED IN! THseptoct15pg_cs.indd 4