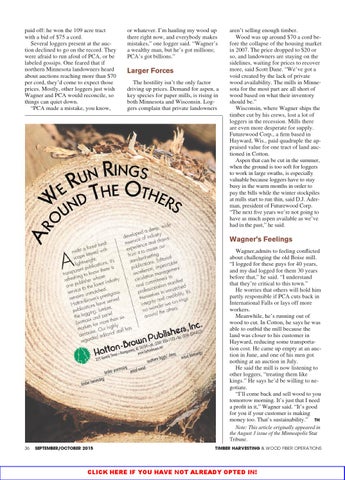 paid off: he won the 109 acre tract with a bid of $75 a cord. Several loggers present at the auction declined to go on the record. They were afraid to run afoul of PCA, or be labeled gossips. One feared that if northern Minnesota landowners heard about auctions reaching more than $70 per cord, they’d come to expect those prices. Mostly, other loggers just wish Wagner and PCA would reconcile, so things can quiet down. “PCA made a mistake, you know,

or whatever. I’m hauling my wood up there right now, and everybody makes mistakes,” one logger said. “Wagner’s a wealthy man, but he’s got millions; PCA’s got billions.”

Larger Forces The hostility isn’t the only factor driving up prices. Demand for aspen, a key species for paper mills, is rising in both Minnesota and Wisconsin. Loggers complain that private landowners

aren’t selling enough timber. Wood was up around $70 a cord before the collapse of the housing market in 2007. The price dropped to $20 or so, and landowners are staying on the sidelines, waiting for prices to recover more, said Scott Dane. “We’ve got a void created by the lack of private wood availability. The mills in Minnesota for the most part are all short of wood based on what their inventory should be.” Wisconsin, where Wagner ships the timber cut by his crews, lost a lot of loggers in the recession. Mills there are even more desperate for supply. Futurewood Corp., a firm based in Hayward, Wis., paid quadruple the appraised value for one tract of land auctioned in Cotton. Aspen that can be cut in the summer, when the ground is too soft for loggers to work in large swaths, is especially valuable because loggers have to stay busy in the warm months in order to pay the bills while the winter stockpiles at mills start to run thin, said D.J. Aderman, president of Futurewood Corp. “The next five years we’re not going to have as much aspen available as we’ve had in the past,” he said.

Wagner’s Feelings Wagner,admits to feeling conflicted about challenging the old Boise mill. “I logged for these guys for 40 years, and my dad logged for them 30 years before that,” he said. “I understand that they’re critical to this town.” He worries that others will hold him partly responsible if PCA cuts back in International Falls or lays off more workers. Meanwhile, he’s running out of wood to cut. In Cotton, he says he was able to outbid the mill because the land was closer to his customer in Hayward, reducing some transportation cost. He came up empty at an auction in June, and one of his men got nothing at an auction in July. He said the mill is now listening to other loggers, “treating them like kings.” He says he’d be willing to negotiate. “I’ll come back and sell wood to you tomorrow morning. It’s just that I need a profit in it,” Wagner said. “It’s good for you if your customer is making money too. That’s sustainability.” TH Note: This article originally appeared in the August 3 issue of the Minneapolis Star Tribune. 36

CLICK HERE IF YOU HAVE NOT ALREADY OPTED IN! THseptoct15pg_cs.indd 36