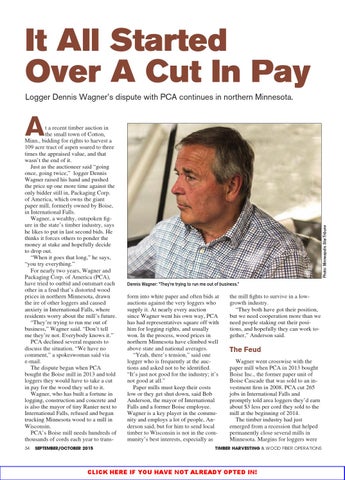 It All Started Over A Cut In Pay Logger Dennis Wagner’s dispute with PCA continues in northern Minnesota.

t a recent timber auction in the small town of Cotton, Minn., bidding for rights to harvest a 109 acre tract of aspen soared to three times the appraised value, and that wasn’t the end of it. Just as the auctioneer said “going once, going twice,” logger Dennis Wagner raised his hand and pushed the price up one more time against the only bidder still in, Packaging Corp. of America, which owns the giant paper mill, formerly owned by Boise, in International Falls. Wagner, a wealthy, outspoken figure in the state’s timber industry, says he likes to put in last second bids. He thinks it forces others to ponder the money at stake and hopefully decide to drop out. “When it goes that long,” he says, “you try everything.” For nearly two years, Wagner and Packaging Corp. of America (PCA), have tried to outbid and outsmart each other in a feud that’s distorted wood prices in northern Minnesota, drawn the ire of other loggers and caused anxiety in International Falls, where residents worry about the mill’s future. “They’re trying to run me out of business,” Wagner said. “Don’t tell me they’re not. Everybody knows it.” PCA declined several requests to discuss the situation. “We have no comment,” a spokeswoman said via e-mail. The dispute began when PCA bought the Boise mill in 2013 and told loggers they would have to take a cut in pay for the wood they sell to it. Wagner, who has built a fortune in logging, construction and concrete and is also the mayor of tiny Ranier next to International Falls, refused and began trucking Minnesota wood to a mill in Wisconsin. PCA’s Boise mill needs hundreds of thousands of cords each year to trans34

Dennis Wagner: “They’re trying to run me out of business.”

form into white paper and often bids at auctions against the very loggers who supply it. At nearly every auction since Wagner went his own way, PCA has had representatives square off with him for logging rights, and usually won. In the process, wood prices in northern Minnesota have climbed well above state and national averages. “Yeah, there’s tension,” said one logger who is frequently at the auctions and asked not to be identified. “It’s just not good for the industry; it’s not good at all.” Paper mills must keep their costs low or they get shut down, said Bob Anderson, the mayor of International Falls and a former Boise employee. Wagner is a key player in the community and employs a lot of people, Anderson said, but for him to send local timber to Wisconsin is not in the community’s best interests, especially as

the mill fights to survive in a lowgrowth industry. “They both have got their position, but we need cooperation more than we need people staking out their positions, and hopefully they can work together,” Anderson said.

The Feud Wagner went crosswise with the paper mill when PCA in 2013 bought Boise Inc., the former paper unit of Boise Cascade that was sold to an investment firm in 2008. PCA cut 265 jobs in International Falls and promptly told area loggers they’d earn about $3 less per cord they sold to the mill at the beginning of 2014. The timber industry had just emerged from a recession that helped permanently close several mills in Minnesota. Margins for loggers were

CLICK HERE IF YOU HAVE NOT ALREADY OPTED IN! THseptoct15pg_cs.indd 34