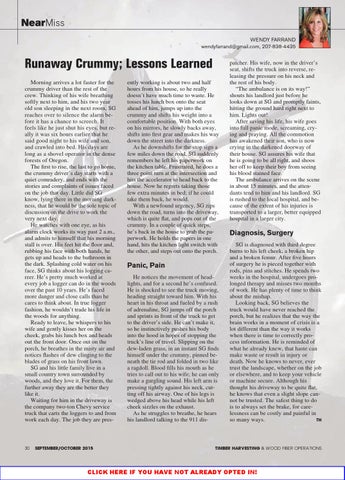 Runaway Crummy; Lessons Learned Morning arrives a lot faster for the crummy driver than the rest of the crew. Thinking of his wife breathing softly next to him, and his two year old son sleeping in the next room, SG reaches over to silence the alarm before it has a chance to screech. It feels like he just shut his eyes, but really it was six hours earlier that he said good night to his wife and son, and crawled into bed. His days are long as a shovel operator in the dense forests of Oregon. The first to rise, the last to go home, the crummy driver’s day starts with a quiet comradery, and ends with the stories and complaints of issues faced on the job that day. Little did SG know, lying there in the morning darkness, that he would be the sole topic of discussion on the drive to work the very next day. He watches with one eye, as his alarm clock works its way past 2 a.m., and admits to himself that his morning stall is over. His feet hit the floor and, rubbing his face with both hands, he gets up and heads to the bathroom in the dark. Splashing cold water on his face, SG thinks about his logging career. He’s pretty much worked at every job a logger can do in the woods over the past 10 years. He’s faced more danger and close calls than he cares to think about. In true logger fashion, he wouldn’t trade his life in the woods for anything. Ready to leave, he whispers to his wife and gently kisses her on the cheek, grabs his lunch box and heads out the front door. Once out on the porch, he breathes in the misty air and notices flashes of dew clinging to the blades of grass on his front lawn. SG and his little family live in a small country town surrounded by woods, and they love it. For them, the further away they are the better they like it. Waiting for him in the driveway is the company two-ton Chevy service truck that carts the loggers to and from work each day. The job they are pres-

ently working is about two and half hours from his house, so he really doesn’t have much time to waste. He tosses his lunch box onto the seat ahead of him, jumps up into the crummy and shifts his weight into a comfortable position. With both eyes on his mirrors, he slowly backs away, shifts into first gear and makes his way down the street into the darkness. As he downshifts for the stop sign a few miles down the road, SG suddenly remembers he left his paperwork on the kitchen table. Frustrated, he does a three point turn at the intersection and hits the accelerator to head back to the house. Now he regrets taking those few extra minutes in bed; if he could take them back, he would. With a newfound urgency, SG zips down the road, turns into the driveway, which is quite flat, and pops out of the crummy. In a couple of quick steps, he’s back in the house to grab the paperwork. He holds the papers in one hand, hits the kitchen light switch with the other, and steps out onto the porch.

Panic, Pain He notices the movement of headlights, and for a second he’s confused. He is shocked to see the truck moving, heading straight toward him. With his heart in his throat and fueled by a rush of adrenaline, SG jumps off the porch and sprints in front of the truck to get to the driver’s side. He can’t make it, so he instinctively pushes his body into the hood in hopes of stopping the truck’s line of travel. Slipping on the dew-laden grass, in an instant SG finds himself under the crummy, pinned beneath the tie rod and folded in two like a ragdoll. Blood fills his mouth as he tries to call out to his wife; he can only make a gurgling sound. His left arm is pressing tightly against his neck, cutting off his airway. One of his legs is wedged above his head while his left cheek sizzles on the exhaust. As he struggles to breathe, he hears his landlord talking to the 911 dis-

patcher. His wife, now in the driver’s seat, shifts the truck into reverse, releasing the pressure on his neck and the rest of his body. “The ambulance is on its way!” shouts his landlord just before he looks down at SG and promptly faints, hitting the ground hard right next to him. Lights out! After saving his life, his wife goes into full panic mode, screaming, crying and praying. All the commotion has awakened their son, who is now crying in the darkened doorway of their house. SG assures his wife that he is going to be all right, and shoos her off to keep their boy from seeing his blood stained face. The ambulance arrives on the scene in about 15 minutes, and the attendants tend to him and his landlord. SG is rushed to the local hospital, and because of the extent of his injuries is transported to a larger, better equipped hospital in a larger city.

Diagnosis, Surgery SG is diagnosed with third degree burns to his left cheek, a broken hip and a broken femur. After five hours of surgery he is pieced together with rods, pins and stitches. He spends two weeks in the hospital, undergoes prolonged therapy and misses two months of work. He has plenty of time to think about the mishap. Looking back, SG believes the truck would have never reached the porch, but he realizes that the way the brain works in a moment of crisis is a lot different than the way it works when there is time to correctly process information. He is reminded of what he already knew, that haste can make waste or result in injury or death. Now he knows to never, ever trust the landscape, whether on the job or elsewhere, and to keep your vehicle or machine secure. Although his thought his driveway to be quite flat, he knows that even a slight slope cannot be trusted. The safest thing to do is to always set the brake, for carelessness can be costly and painful in TH so many ways.

CLICK HERE IF YOU HAVE NOT ALREADY OPTED IN! THoct15pgs_SS.indd 30