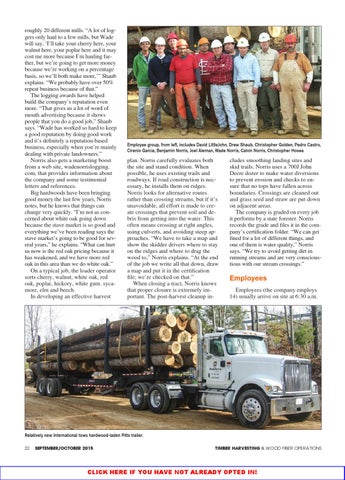 roughly 20 different mills. “A lot of loggers only haul to a few mills, but Wade will say, ‘I’ll take your cherry here, your walnut here, your poplar here and it may cost me more because I’m hauling farther, but we’re going to get more money because we’re working on a percentage basis, so we’ll both make more,’” Shaub explains. “We probably have over 50% repeat business because of that.” The logging awards have helped build the company’s reputation even more. “That gives us a lot of word of mouth advertising because it shows people that you do a good job,” Shaub says. “Wade has worked so hard to keep a good reputation by doing good work and it’s definitely a reputation-based business, especially when you’re mainly dealing with private landowners.” Norris also gets a marketing boost from a web site, wadenorrislogging. com, that provides information about the company and some testimonial letters and references. Big hardwoods have been bringing good money the last few years, Norris notes, but he knows that things can change very quickly. “I’m not as concerned about white oak going down because the stave market is so good and everything we’ve been reading says the stave market’s going to be good for several years,” he explains. “What can hurt us now is the red oak pricing because it has weakened, and we have more red oak in this area than we do white oak.” On a typical job, the loader operator sorts cherry, walnut, white oak, red oak, poplar, hickory, white gum. sycamore, elm and beech. In developing an effective harvest

plan. Norris carefully evaluates both the site and stand condition. When possible, he uses existing trails and roadways. If road construction is necessary, he installs them on ridges. Norris looks for alternative routes rather than crossing streams, but if it’s unavoidable, all effort is made to create crossings that prevent soil and debris from getting into the water. This often means crossing at right angles, using culverts, and avoiding steep approaches. “We have to take a map and show the skidder drivers where to stay on the ridges and where to drag the wood to,” Norris explains. “At the end of the job we write all that down, draw a map and put it in the certification file; we’re checked on that.” When closing a tract, Norris knows that proper closure is extremely important. The post-harvest cleanup in-

cludes smoothing landing sites and skid trails. Norris uses a 700J John Deere dozer to make water diversions to prevent erosion and checks to ensure that no tops have fallen across boundaries. Crossings are cleaned out and grass seed and straw are put down on adjacent areas. The company is graded on every job it performs by a state forester. Norris records the grade and files it in the company’s certification folder. “We can get fined for a lot of different things, and one of them is water quality,” Norris says. “We try to avoid getting dirt in running streams and are very conscioustious with our stream crossings.”

CLICK HERE IF YOU HAVE NOT ALREADY OPTED IN! THseptoct15pg_cs.indd 22