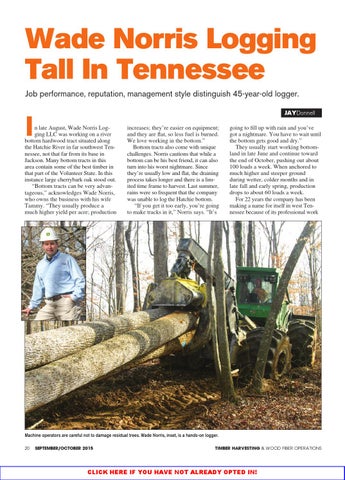 n late August, Wade Norris Logging LLC was working on a river bottom hardwood tract situated along the Hatchie River in far southwest Tennessee, not that far from its base in Jackson. Many bottom tracts in this area contain some of the best timber in that part of the Volunteer State. In this instance large cherrybark oak stood out. “Bottom tracts can be very advantageous,” acknowledges Wade Norris, who owns the business with his wife Tammy. “They usually produce a much higher yield per acre; production

increases; they’re easier on equipment; and they are flat, so less fuel is burned. We love working in the bottom.” Bottom tracts also come with unique challenges. Norris cautions that while a bottom can be his best friend, it can also turn into his worst nightmare. Since they’re usually low and flat, the draining process takes longer and there is a limited time frame to harvest. Last summer, rains were so frequent that the company was unable to log the Hatchie bottom. “If you get it too early, you’re going to make tracks in it,” Norris says. “It’s

going to fill up with rain and you’ve got a nightmare. You have to wait until the bottom gets good and dry.” They usually start working bottomland in late June and continue toward the end of October, pushing out about 100 loads a week. When anchored to much higher and steeper ground during wetter, colder months and in late fall and early spring, production drops to about 60 loads a week. For 22 years the company has been making a name for itself in west Tennessee because of its professional work

Machine operators are careful not to damage residual trees. Wade Norris, inset, is a hands-on logger. 20

CLICK HERE IF YOU HAVE NOT ALREADY OPTED IN! THseptoct15pg_cs.indd 20