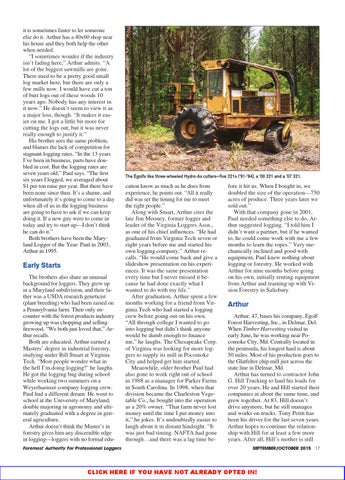 it is sometimes faster to let someone else do it. Arthur has a 40x60 shop near his house and they both help the other when needed. “I sometimes wonder if the industry isn’t fading here,” Arthur admits. “A lot of the biggest sawmills are gone. There used to be a pretty good small log market here, but there are only a few mills now. I would have cut a ton of butt logs out of these woods 10 years ago. Nobody has any interest in it now.” He doesn’t seem to view it as a major loss, though. “It makes it easier on me. I got a little bit more for cutting the logs out, but it was never really enough to justify it.” His brother sees the same problem, and blames the lack of competition for stagnant logging rates. “In the 13 years I’ve been in business, parts have doubled in cost. But the logging rates are seven years old,” Paul says. “The first six years I logged, we averaged about $1 per ton raise per year. But there have been none since then. It’s a shame, and unfortunately it’s going to come to a day when all of us in the logging business are going to have to ask if we can keep doing it. If a new guy were to come in today and try to start up—I don’t think he can do it.” Both brothers have been the Maryland Logger of the Year: Paul in 2003, Arthur in 1995.

Early Starts The brothers also share an unusual background for loggers. They grew up in a Maryland subdivision, and their father was a USDA research geneticist (plant breeding) who had been raised on a Pennsylvania farm. Their only encounter with the forest products industry growing up was chopping and selling firewood. “We both just loved that,” Arthur recalls. Both are educated. Arthur earned a Masters’ degree in industrial forestry, studying under Bill Stuart at Virginia Tech. “Most people wonder what in the hell I’m doing logging!” he laughs. He got the logging bug during school while working two summers on a Weyerhaeuser company logging crew. Paul had a different dream. He went to school at the University of Maryland, double majoring in agronomy and ultimately graduated with a degree in general agriculture. Arthur doesn’t think the Master’s in forestry gives him any discernible edge in logging—loggers with no formal eduForemost Authority For Professional Loggers 

cation know as much as he does from experience, he points out. “All it really did was set the timing for me to meet the right people.” Along with Stuart, Arthur cites the late Jim Mooney, former logger and leader of the Virginia Loggers Assn., as one of his chief influences. “He had graduated from Virginia Tech seven or eight years before me and started his own logging company,” Arthur recalls. “He would come back and give a slideshow presentation on his experiences. It was the same presentation every time but I never missed it because he had done exactly what I wanted to do with my life.” After graduation, Arthur spent a few months working for a friend from Virginia Tech who had started a logging crew before going out on his own. “All through college I wanted to go into logging but didn’t think anyone would be dumb enough to finance me,” he laughs. The Chesapeake Corp. of Virginia was looking for more loggers to supply its mill in Pocomoke City and helped get him started. Meanwhile, older brother Paul had also gone to work right out of school in 1988 as a manager for Parker Farms in South Carolina. In 1998, when that division became the Charleston Vegetable Co., he bought into the operation as a 20% owner. “That farm never lost money until the time I put money into it,” he jokes. It’s undoubtedly easier to laugh about it in distant hindsight. “It was just bad timing. NAFTA had gone through…and there was a lag time be-

fore it hit us. When I bought in, we doubled the size of the operation—750 acres of produce. Three years later we sold out.” With that company gone in 2001, Paul needed something else to do. Arthur suggested logging. “I told him I didn’t want a partner, but if he wanted to, he could come work with me a few months to learn the ropes.” Very mechanically inclined and good with equipment, Paul knew nothing about logging or forestry. He worked with Arthur for nine months before going on his own, initially renting equipment from Arthur and teaming up with Vision Forestry in Salisbury.

Arthur Arthur, 47, bases his company, Egolf Forest Harvesting, Inc., in Delmar, Del. When Timber Harvesting visited in early June, he was working near Pocomoke City, Md. Centrally located in the peninsula, his longest haul is about 50 miles. Most of his production goes to the Glatfelter chip mill just across the state line in Delmar, Md. Arthur has turned to contractor John G. Hill Trucking to haul his loads for over 20 years. He and Hill started their companies at about the same time, and grew together. At 83, Hill doesn’t drive anymore, but he still manages and works on trucks. Tony Pettit has been his driver for the last seven years. Arthur hopes to continue the relationship with Hill for at least a few more years. After all, Hill’s mother is still SEPTEMBER/OCTOBER 2015 17

CLICK HERE IF YOU HAVE NOT ALREADY OPTED IN! THseptoct15pg_cs.indd 17