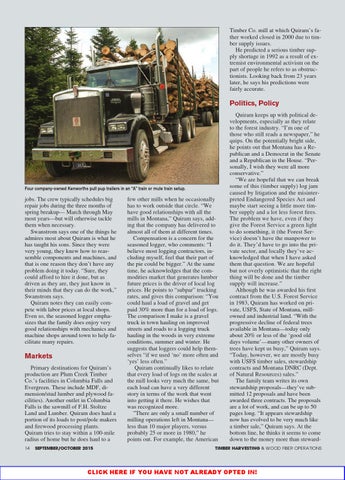 Timber Co. mill at which Quiram’s father worked closed in 2000 due to timber supply issues. He predicted a serious timber supply shortage in 1992 as a result of extremist environmental activism on the part of people he refers to as obstructionists. Looking back from 23 years later, he says his predictions were fairly accurate.

jobs. The crew typically schedules big repair jobs during the three months of spring breakup— March through May most years—but will otherwise tackle them when necessary. Swanstrom says one of the things he admires most about Quiram is what he has taught his sons. Since they were very young, they knew how to reassemble components and machines, and that is one reason they don’t have any problem doing it today. “Sure, they could afford to hire it done, but as driven as they are, they just know in their minds that they can do the work,” Swanstrom says. Quiram notes they can easily compete with labor prices at local shops. Even so, the seasoned logger emphasizes that the family does enjoy very good relationships with mechanics and machine shops around town to help facilitate many repairs.

Markets Primary destinations for Quiram’s production are Plum Creek Timber Co.’s facilities in Columbia Falls and Evergreen. These include MDF, dimension/stud lumber and plywood facilities). Another outlet in Columbia Falls is the sawmill of F.H. Stoltze Land and Lumber. Quiram does haul a portion of its loads to post/pole makers and firewood processing plants. Quiram tries to stay within a 100-mile radius of home but he does haul to a 14

few other mills when he occasionally has to work outside that circle. “We have good relationships with all the mills in Montana,” Quiram says, adding that the company has delivered to almost all of them at different times. Compensation is a concern for the seasoned logger, who comments: “I believe most logging contractors, including myself, feel that their part of the pie could be bigger.” At the same time, he acknowledges that the commodities market that generates lumber future prices is the driver of local log prices. He points to “subpar” trucking rates, and gives this comparison: “You could haul a load of gravel and get paid 30% more than for a load of logs. The comparison I make is a gravel truck in town hauling on improved streets and roads to a logging truck hauling in the woods in very extreme conditions, summer and winter. He suggests that loggers could help themselves “if we used ‘no’ more often and ‘yes’ less often.” Quiram continually likes to relate that every load of logs on the scales at the mill looks very much the same, but each load can have a very different story in terms of the work that went into getting it there. He wishes that was recognized more. ”There are only a small number of milling operations left in Montana— less than 10 major players, versus probably 25 or more in 1980,” he points out. For example, the American

Quiram keeps up with political developments, especially as they relate to the forest industry. “I’m one of those who still reads a newspaper,” he quips. On the potentially bright side, he points out that Montana has a Republican and a Democrat in the Senate and a Republican in the House. “Personally, I wish they were all more conservative.” “We are hopeful that we can break some of this (timber supply) log jam caused by litigation and the misinterpreted Endangered Species Act and maybe start seeing a little more timber supply and a lot less forest fires. The problem we have, even if they give the Forest Service a green light to do something, it (the Forest Service) doesn’t have the manpower to do it. They’d have to go into the private sector, and locally they’ve acknowledged that when I have asked them that question. We are hopeful but not overly optimistic that the right thing will be done and the timber supply will increase.” Although he was awarded his first contract from the U.S. Forest Service in 1983, Quiram has worked on private, USFS, State of Montana, millowned and industrial land. “With the progressive decline of federal trees available in Montana—today only about 20% or less of the ‘good old days volume’—many other owners of trees have kept us busy,” Quiram says. “Today, however, we are mostly busy with USFS timber sales, stewardship contracts and Montana DNRC (Dept. of Natural Resources) sales.” The family team writes its own stewardship proposals—they’ve submitted 12 proposals and have been awarded three contracts. The proposals are a lot of work, and can be up to 50 pages long. “It appears stewardship now has evolved to be very much like a timber sale,” Quiram says. At the bottom line, he thinks it seems to come down to the money more than steward-

CLICK HERE IF YOU HAVE NOT ALREADY OPTED IN! THoct15pgs_SS.indd 14