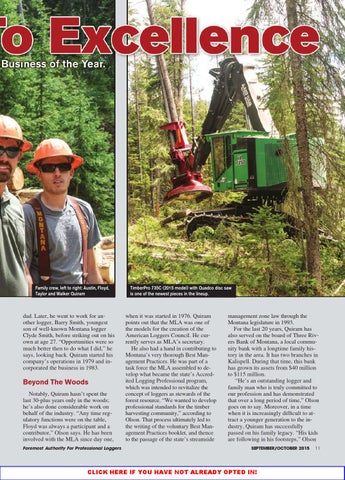 dad. Later, he went to work for another logger, Barry Smith, youngest son of well-known Montana logger Clyde Smith, before striking out on his own at age 27. “Opportunities were so much better then to do what I did,” he says, looking back. Quiram started his company’s operations in 1979 and incorporated the business in 1983.

Beyond The Woods Notably, Quiram hasn’t spent the last 30-plus years only in the woods; he’s also done considerable work on behalf of the industry. “Any time regulatory functions were on the table, Floyd was always a participant and a contributor,” Olson says. He has been involved with the MLA since day one, Foremost Authority For Professional Loggers 

TimberPro 735C (2015 model) with Quadco disc saw is one of the newest pieces in the lineup.

when it was started in 1976. Quiram points out that the MLA was one of the models for the creation of the American Loggers Council. He currently serves as MLA’s secretary. He also had a hand in contributing to Montana’s very thorough Best Management Practices. He was part of a task force the MLA assembled to develop what became the state’s Accredited Logging Professional program, which was intended to revitalize the concept of loggers as stewards of the forest resource. “We wanted to develop professional standards for the timber harvesting community,” according to Olson. That process ultimately led to the writing of the voluntary Best Management Practices booklet, and thence to the passage of the state’s streamside

management zone law through the Montana legislature in 1993. For the last 20 years, Quiram has also served on the board of Three Rivers Bank of Montana, a local community bank with a longtime family history in the area. It has two branches in Kalispell. During that time, this bank has grown its assets from $40 million to $115 million. “He’s an outstanding logger and family man who is truly committed to our profession and has demonstrated that over a long period of time,” Olson goes on to say. Moreover, in a time when it is increasingly difficult to attract a younger generation to the industry, Quiram has successfully passed on his family legacy. “His kids are following in his footsteps,” Olson SEPTEMBER/OCTOBER 2015

CLICK HERE IF YOU HAVE NOT ALREADY OPTED IN! THoct15pgs_SS.indd 11