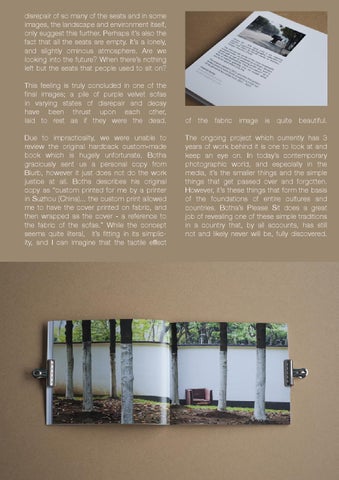 disrepair of so many of the seats and in some images, the landscape and environment itself, only suggest this further. Perhaps it’s also the fact that all the seats are empty. It’s a lonely, and slightly ominous atmosphere. Are we looking into the future? When there’s nothing left but the seats that people used to sit on? This feeling is truly concluded in one of the final images; a pile of purple velvet sofas in varying states of disrepair and decay have been thrust upon each other, laid to rest as if they were the dead. Due to impracticality, we were unable to review the original hardback custom‐made book which is hugely unfortunate. Botha graciously sent us a personal copy from Blurb, however it just does not do the work justice at all. Botha describes his original copy as “custom printed for me by a printer in Suzhou (China)... the custom print allowed me to have the cover printed on fabric, and then wrapped as the cover ‐ a reference to the fabric of the sofas.” While the concept seems quite literal, it’s fitting in its simplicity, and I can imagine that the tactile effect

of the fabric image is quite beautiful. The ongoing project which currently has 3 years of work behind it is one to look at and keep an eye on. In today’s contemporary photographic world, and especially in the media, it’s the smaller things and the simple things that get passed over and forgotten. However, it’s these things that form the basis of the foundations of entire cultures and countries. Botha’s Please Sit does a great job of revealing one of these simple traditions in a country that, by all accounts, has still not and likely never will be, fully discovered. 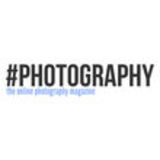