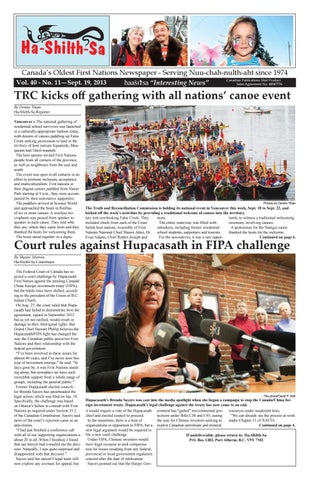 TRC kicks off gathering with all nations’ canoe event By Denise Titian Ha-Shilth-Sa Reporter Vancouver – The national gathering of residential school survivors was launched in a culturally-appropriate fashion today, with dozens of canoes paddling up False Creek seeking permission to land in the territory of host nations Squamish, Musqueam and Tsleil-waututh. The host nations invited First Nations people from all corners of the province, as well as neighbours from the east and south. The event was open to all cultures in an effort to promote inclusion, acceptance and multiculturalism. First nations in their dugout canoes paddled from Vanier Park starting at 9 a.m.; they were accompanied by their non-native supporters. The paddlers arrived at Science World and approached the hosts in flotillas of six or more canoes. A wireless microphone was passed from speaker to speaker in each canoe. They told who they are, where they came from and they thanked the hosts for welcoming them. The hosts stood together in a digni-

The Truth and Reconciliation Commission is holding its national event in Vancouver this week, Sept. 18 to Sept. 22, and kicked off the week’s activities by providing a traditional welcome of canoes into the territory. tary tent overlooking False Creek. They more. tunity to witness a traditional welcoming included chiefs from each of the Coast The entire waterway was filled with ceremony involving canoes. Salish host nations, Assembly of First onlookers, including former residential A spokesman for the Namgis canoe Nations National Chief Shawn Atleo, Dr. school students, supporters and tourists. thanked the hosts for the welcome. Evan Adams, Chief Robert Joseph and For the non-natives, it was a rare opporContinued on page 6.

Court rules against Hupacasath in FIPA challenge By Shayne Morrow Ha-Shilth-Sa Contributor The Federal Court of Canada has rejected a court challenge by Hupacasath First Nation against the pending Canada/ China foreign investment treaty (FIPA), but the battle lines have shifted, according to the president of the Union of B.C. Indian Chiefs. On Aug. 27, the court ruled that Hupacasath had failed to demonstrate how the agreement, signed in September 2012 but as yet not ratified, would result in damage to their Aboriginal rights. But Grand Chief Stewart Phillip believes the Hupacasath/FIPA fight has changed the way the Canadian public perceives First Nations and their relationship with the federal government. “I’ve been involved in these issues for almost 40 years, and I’ve never seen this type of movement emerge,” he said. “In days gone by, it was First Nations standing alone, but nowadays we have such incredible support from a whole range of groups, including the general public.” Former Hupacasath elected councillor Brenda Sayers has spearheaded the legal action, which was filed on Jan. 18. Specifically, the challenge was based on Ottawa’s failure to consult with First Nations as required under Section 35.2 of the Canadian Constitution. Sayers said news of the court’s rejection came as an anti-climax. “I had just finished a conference call with all of our supporting organizations – about 20 in all. When I finished, I found that our lawyer had e-mailed me the decision. Naturally, I was quite surprised and disappointed with that decision.” Sayers said her nation’s legal team will now explore any avenues for appeal, but

Hupacasath’s Brenda Sayers was cast into the media spotlight when she began a campaign to stop the Canada/China foreign investment treaty. Hupacasath’s legal challenge against the treaty has now come to an end. it would require a vote of the Hupacasath ernment has “gutted” environmental proresources under weakened laws. chief and elected council to proceed. tections under Bills C38 and C45, easing “We can already see the process at work In the meantime, there is a host of the way for Chinese investors seeking to under Chapter 11 of NAFTA organizations in opposition to FIPA, but a exploit Canadian petroleum and mineral Continued on page 4. new legal argument would be required to file a new court challenge. If undeliverable, please return to: Ha-Shilth-Sa Under FIPA, Chinese investors would P.O. Box 1383, Port Alberni, B.C. V9Y 7M2 have legal recourse to seek compensation for losses resulting from any federal, provincial or local government regulation enacted after the date of ratification. Sayers pointed out that the Harper Gov-