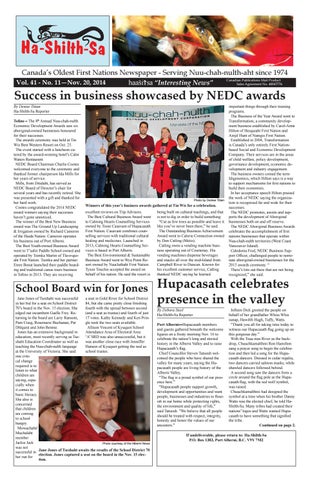 Success in business showcased by NEDC awards By Denise Titian Ha-Shilth-Sa Reporter Tofino – The 8th Annual Nuu-chah-nulth Economic Development Awards saw six aboriginal-owned businesses honoured for their successes. The awards ceremony was held at Tin Wis Best Western Resort on Oct. 25. The event started with a luncheon catered by the award-winning hotel’s Calm Waters Restaurant. NEDC Board Chairman Charlie Cootes welcomed everyone to the ceremony and thanked former chairperson Ida Mills for her years of service. Mills, from Ditidaht, has served as NEDC Board of Director’s chair for several years and has recently retired. She was presented with a gift and thanked for her hard work. Cootes congratulated the 2014 NEDC award winners saying their successes haven’t gone unnoticed. The winner of the Best New Business award was The Ground Up Landscaping &amp; Irrigation owned by Richard Cameron of the Haida Nation. Cameron operates his business out of Port Alberni. The Best Youth-owned Business Award went to T’ashii Paddle School owned and operated by Tsimka Martin of Tla-o-quiaht First Nation. Tsimka and her partner Emre Bosut launched their paddle boarding and traditional canoe tours business in Tofino in 2013. They are receiving

School Board win for Jones Jane Jones of Tseshaht was successful a seat in Gold River for School District in her bid for a seat on School District 84, but she came pretty close finishing 70’s board in the Nov. 15 election. She fourth with the spread between second edged out incumbent Gaelle Frey. Re(and a seat as trustee) and fourth of just turning to the board are Larry Ransom, 17 votes. Kathy Kennedy and Ken PrinPam Craig, Rosemarie Buchanan, Pat gle took the two seats available. Dhlquist and John Bennie. Allison Vincent of Kyuquot School Jones has an extensive background in Attendance Area of Electoral Area education, most recently serving as Tse- ‘A’ SRD was also unsuccessful, but it shaht Education Coordinator as well as was another close race with Jenniffer teaching the Nuu-chah-nulth language Hanson of Kyuquot getting the nod as at the University of Victoria. She said school trustee. one critical change required is to listen to what children are saying, especially when it comes to basic literacy. She also is concerned that children are coming to school hungry. Mowachaht/ Muchalaht member Jackie Jack Photo courtesy of the Alberni News was not Jane Jones of Tseshaht awaits the results of the School District 70 successful in election. Jones captured a seat on the board in the Nov. 15 elecher run for tion.

being built on cultural teachings, and that is not to dig in order to build something. “Cut as few trees as possible and leave it like you’ve never been there,” he said. The Outstanding Business Achievement Award went to Calorie Connection owned by Don Catling (Metis). Catling owns a vending machine business operating out of Courtenay. His vending machines dispense beverages and snacks all over the mid-Island from Campbell River to Duncan. Known for his excellent customer service, Catling thanked NEDC saying he learned

important things through their training programs. The Business of the Year Award went to Transformation, a community development business established by Carol-Anne Hilton of Hesquiaht First Nation and Ainjil Hunt of Namgis First Nation. Established in 2004, Transformation is Canada’s only entirely First Nationbased Social and Economic Development Company. Their services are in the areas of child welfare, policy development, governance development, economic development and industry engagement. The business owners coined the term Idigenomics, which Hilton says is a way to support mechanisms for first nations to build their economies. In her acceptance speech Hilton praised the work of NEDC saying the organization is recognized far and wide for their successes. The NEDC promotes, assists and supports the development of Aboriginal businesses both on and off reserve. The NEDC Aboriginal Business Awards celebrates the accomplishment of first nations businesses that operate within Nuu-chah-nulth territories (West Coast Vancouver Island). Caledonia Fred, NEDC Business Support Officer, challenged people to nominate aboriginal-owned businesses for the 2015 awards ceremony. “ There’s lots out there that are not being recognized,” she said.

Hupacasath celebrates presence in the valley By Debora Steel Ha-Shilth-Sa Reporter Port Alberni—Hupacasath members and guests gathered beneath the welcome figures on a frosty morning Nov. 16 to celebrate the nation’s long and storied history in the Alberni Valley and to raise Hupacasath’s flag. Chief Councillor Steven Tatoosh welcomed the people who have shared the valley for many years, saying the Hupacasath people are living history of the Alberni Valley. “The flag is a proud symbol of our presence here.” “Hupacasath people support growth, development and opportunities and want people, businesses and industries to flourish in our home while protecting rights, the environment and quality of life,” said Tatoosh. “We believe that all people should be treated with respect, integrity, honesty and honor the values of our ancestors.”

Jolleen Dick greeted the people on behalf of her grandfather Whiss Whis sunap, Hawilth Hugh, Tuffy, Watts. “Thank you all for taking time today to witness our Hupacasath flag going up on this gorgeous day.” With the Tsuu mas River as the backdrop, Chuuchkamalthnii Ron Hamilton sang a prayer song to begin the celebration and then led a song for the Hupacasath dancers. Dressed in cedar regalia, two dancers carried salmon masks, while shawled dancers followed behind. A second song saw the dancers form a circle around the flag pole as the Hupacasath flag, with the red wolf symbol, was raised. Chuuchkamalthnii had designed the symbol at a time when his brother Danny Watts was the elected chief, he told HaShilth-Sa. Many tribes had created their nations’ logos and Watts wanted Hupacasath to have something that signified the tribe. Continued on page 2.