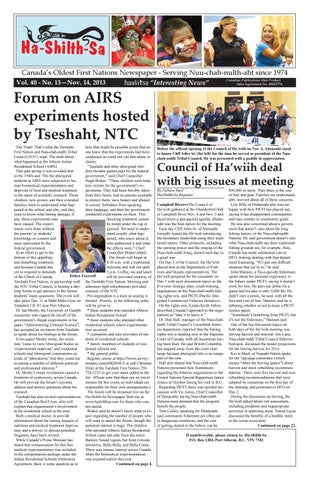 The Truth! That’s what the Tseshaht how that might be possible given that no First Nation and Nuu-chah-nulth Tribal one knew that the experiments had been Council (NTC) want. The truth about conducted so could not cite that abuse in what happened at the Alberni Indian claims. Residential School (AIRS). “Tseshaht and other aboriginal chilThis past spring it was revealed that dren became guinea pigs for the federal in the 1940s and ‘50s the aboriginal government,” said Chief Councillor students at AIRS were subjected to huHugh Braker. “These children were helpman biomedical experimentation and less victims for the government’s exdeprived of food and medical treatment periments. They had been forcibly taken in the name of scientific research. Those from their home, had no parents available children, now grown, and their extended to protect them, were beaten and abused families want to understand what hapin school, forbidden from speaking pened at the school and why, and they their language, and then the government want to know what lasting damage, if conducted experiments on them. This any, those experiments may shocking treatment cannot have caused. The experibe swept under the rug or ments were done without ignored. We need to underthe parents’ or students’ stand exactly what hapknowledge or consent and pened, who knew about it, were sanctioned by the who authorized it and what federal government. the effects were,” Chief In an effort to get to the Councillor Braker added. bottom of this appalling The forum will begin at and disturbing treatment, 8:30 a.m. with a traditional and because Canada has welcome and will run until yet to respond to demands 5 p.m. Coffee, tea and lunch Debra Foxcroft of the Chiefs of Canada, will be provided courtesy of Tseshaht First Nation, in partnership with the Tseshaht First Nation. Morning and the NTC Tribal Council, is hosting a day- afternoon light refreshments provided long forum to get answers to the former courtesy of the NTC. students’ many questions. The event will Pre-registration is a must as seating is take place Dec. 11 at Maht Mahs Gym on limited. Priority, in the following order, Tsahaheh I.R. #1 near Port Alberni. will be given to: Dr. Ian Mosby, the University of Guelph * those students who attended Alberni researcher who ripped the lid off of the Indian Residential School government’s illegal experiments in his * those students who attended other paper “Administering Colonial Science”, residential schools where experimentahas accepted an invitation from Tseshaht tion occurred to speak about his findings at the forum. * counselors and care providers of stuIn his paper Mosby wrote, the sciendents of residential schools tists “came to view Aboriginal bodies as * family members of students of resi‘experimental materials’ and residential dential schools and schools and Aboriginal communities as * the general public kinds of ‘laboratories’ that they could use Register online at https://www.surveyto pursue a number of different political monkey.com/s/B2J65CS or call Christine and professional interests.” Hintz at the Tseshaht First Nation 250Dr. Mosby’s many revelations caused a 724-1225 to get your name added to the firestorm of controversy across Canada. list. (Please note that there are no travel He will provide the forum’s keynote monies for this event, so individuals are address and answer questions about his responsible for their own arrangements.) research. The forum will be streamed live on the Tseshaht has also invited representatives Ha-Shilth-Sa Newspaper Web site at of the Canadian Red Cross, who will www.hashilthsa.com for those who canexplain that organization’s involvement not attend. at the residential school at the time. Braker said he doesn’t know what to exBoth a medical doctor, to provide pect regarding the number of people who information about the lasting impacts of will want to attend the forum, though the nutrition and medical treatment deprivapotential interest is huge. The children tion, and a lawyer, to discuss potential who attended Alberni Indian Residential litigation, have been invited. School came not only from the entire While Canada’s Prime Minister has Barkley Sound region, but from Gitxsan stated that compensation for this bioterritories, Bella Bella, and Bella Coola. medical experimentation was included There was intense interest across Canada in the compensation package under the when the biomedical experimentation Indian Residential Schools Settlement was exposed earlier this year. Agreement, there is some question as to Continued on page 4.

Before the official opening of the Council of Ha’wiih on Nov. 4, Ahousaht stood to honor Cliff Atleo Sr. (far left) for the time he served as president of the Nuuchah-nulth Tribal Council. He was presented with a paddle in appreciation.

Campbell River—The Council of Ha’wiih gathered at the Thunderbird Hall in Campbell River Nov. 4 and Nov. 5 and faced down a jam-packed agenda. Ehattesaht was the host nation for the meeting. Each day Cliff Atleo Sr. of Ahousaht formally seated the Ha’wiih introducing the hereditary leadership using their traditional names. Other protocols, including the opening prayer and the singing of the Nuu-chah-nulth Song, started each day in a good way. On Day 2 of the Council, the Ha’wiih played host to the Department of Fisheries and Oceans representatives. The Ha’wiih prepared for the encounter on Day 1 with such discussion topics as the five-year strategic plan, youth training, negotiations on the Nuu-chah-nulth fishing rights win, and PICFI (Pacific Integrated Commercial Fisheries Initiative). On the rights win, Kiista (Keith Atleo) described Canada’s approach to the negotiations as “take it or leave it.” Dr. Don Hall, manager of the Nuu-chahnulth Tribal Council’s Uu-a-thluk fisheries department, reported that the fishing rights win is heading now to the Supreme Court of Canada, with all documents having been filed. He said British Columbia has stepped away from the court challenge because aboriginal title is no longer part of the case. Hall also shared that Nuu-chah-nulth Nations presented their frustrations regarding the fisheries negotiations to the United Nations Special Rapporteur James Anaya in October during his visit to B.C. Regarding PICFI, there was spirited discussion with Vic Amos, Chief Councillor of Hesquiaht, saying Nuu-chah-nulth Nations must demand that the program benefit the people. Tom Curley, speaking for Ehattesaht, said community fishermen are often out in dangerous conditions, and the cost of getting started in the fishery can be

$50,000 or more. Then there is the cost of fuel and gear. Families are understandably worried about all of these concerns. Lyle Billy of Ehattesaht also was unhappy with how PICFI has played out, saying it has disappointed communities and runs counter to community goals. He was also concerned about a government that doesn’t care about the long fishing history of the Nuu-chah-nulth Nations. He said government doesn’t care what Nuu-chah-nulth say their traditional fishing grounds are, for example. Also, Canada has made substantial cuts to DFO, making dealing with that department frustrating. “It’s just one difficult situation that we’re in,” he said. John Manson, a Tla-o-qui-aht fisherman, spoke about his personal experience in the fishery under PICFI, saying it doesn’t work for him. He pays top dollar for a quota and his take is only 9,000 lbs. He didn’t earn a penny, he said, with all the fees and cost of fuel. Manson said he is debating whether or not to lease a PICFI licence again. “Somebody’s benefiting from PICFI, but it’s not the fishermen,” Manson said. One of the big discussion topics on both days of the Ha’wiih meeting was herring harvest and renewal. Jim Lane, Nuu-chah-nulth Tribal Council fisheries biologist, discussed the model projections for the herring harvest for 2014. Kevin Mack of Toquaht Nation spoke for the ?aayaaqa committee (which means “when the herring spawn”) about harvest and stock rebuilding recommendations. There were five harvest and nine rebuilding recommendations that were adopted by consensus on the first day of the meeting, and presented to DFO on Day 2. During the discussion on herring, the Ha’wiih talked about risk assessment, including predation and inappropriate activities in spawning areas. Simon Lucas discussed the benefits of a healthy stock to the ocean ecosystem. Continued on page 22.