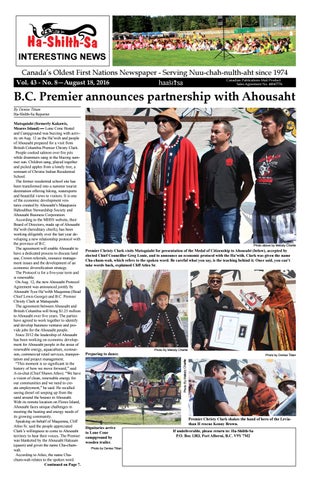 Photo above by Melody Charlie

Premier Christy Clark visits Matsquiaht for presentation of the Medal of Citizenship to Ahousaht (below), accepted by elected Chief Councillor Greg Louie, and to announce an economic protocol with the Ha’wiih. Clark was given the name Cha-chum-wah, which refers to the spoken word. Be careful what you say, is the teaching behind it. Once said, you can’t take words back, explained Cliff Atleo Sr.

Matsquiaht (formerly Kakawis, Meares Island) — Lone Cone Hostel and Campground was buzzing with activity on Aug. 12 as the Ha’wiih and people of Ahousaht prepared for a visit from British Columbia Premier Christy Clark. People cooked salmon over fire pits while drummers sang in the blazing summer sun. Children sang, played together and picked apples from a lonely tree, a remnant of Christie Indian Residential School. The former residential school site has been transformed into a summer tourist destination offering hiking, watersports and beautiful views to visitors. It is one of the economic development ventures created by Ahousaht’s Maaqtusiis Hahoulthee Stewardship Society and Ahousaht Business Corporation. According to the MHSS website, their Board of Directors, made up of Ahousaht Ha’wiih (hereditary chiefs), has been working diligently over the last year developing a new relationship protocol with the province of B.C. The agreement will enable Ahousaht to have a dedicated process to discuss land use, Crown referrals, resource management issues and the development of an economic diversification strategy. The Protocol is for a five-year term and is renewable. On Aug. 12, the new Ahousaht Protocol Agreement was announced jointly by Ahousaht Tyee Ha’wilth Maquinna (Head Chief Lewis George) and B.C. Premier Christy Clark at Matsquiaht. The agreement between Ahousaht and British Columbia will bring $1.25 million to Ahousaht over five years. The parties have agreed to work together to identify and develop business ventures and provide jobs for the Ahousaht people. Since 2012 the leadership of Ahousaht has been working on economic development for Ahousaht people in the areas of renewable energy, aquaculture, ecotourism, commercial retail services, transportation and project management. “This moment is so significant in the history of how we move forward,” said A-in-chut (Chief Shawn Atleo). “We have a vision of clean, renewable energy for our communities and we need to create employment,” he said. He recalled seeing diesel oil seeping up from the sand around the houses in Ahousaht. With its remote location on Flores Island, Ahousaht faces unique challenges in meeting the heating and energy needs of its growing community. Speaking on behalf of Maquinna, Cliff Atleo Sr. said the people appreciated Clark’s willingness to come to Ahousaht territory to hear their voices. The Premier was blanketed by the Ahousaht Hakuum (queen) and given the name Cha-chumwah. According to Atleo, the name Chachum-wah relates to the spoken word. Continued on Page 7.