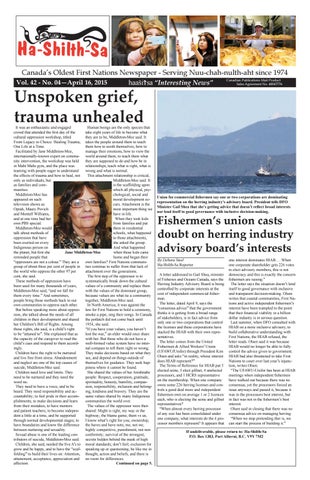 It was an enthusiastic and engaged Human beings are the only species that crowd that attended the first day of the take eight years of life to become what cultural oppression workshop, titled they are to be, Middleton-Moz said. It From Legacy to Choice: Healing Trauma; takes the people around them to teach One Life at a Time. them how to sooth themselves, how to Facilitated by Jane Middleton-Moz, manage their emotions, how to view the internationally-known expert on commu- world around them, to teach them what nity intervention, the workshop was held they are supposed to do and how be in in Maht Mahs gym, and the place was relationships, teach what is right, what is teaming with people eager to understand wrong and what is normal. the effects of trauma and how to heal, not This attachment relationship is critical, only as individuals, but Middleton-Moz said. It as families and comis the scaffolding upon munities. which all physical, psyMiddleton-Moz has chological, social and appeared on such moral development octelevision shows as curs. Attachment is the Oprah, Maury Povich most important thing we and Montell Williams, have in life. and at one time had her When they took kids own PBS special. from families and put Middleton-Moz would them in residential talk about methods of schools, what happened oppression that have to those attachments, been exerted on every she asked the group. Indigenous person on And what happened the planet, but first she when those kids came Jane Middleton-Moz reminded people that home and began their “oppressors are not a colour.” They are a own families? First Nations communigroup of about three per cent of people in ties continue to suffer from that lack of the world who oppress the other 97 per attachment over the generations. cent, she said. The first step of the oppressor is to These methods of oppression have systematically break down the cultural been used for many thousands of years, values of a community and replace them Middleton-Moz said, “and we fall for with the values of the dominant group, them every time.” And sometimes, because values are what tie a community people bring those methods back to our together, Middleton-Moz said. own communities to oppress each other. In North America, it was against the But before speaking more about oppres- law for First Nations to hold a ceremony, sion, she talked about the needs of all smoke a pipe, sing their songs. In Canada children in their development and shared the potlatch did not come back until her Children’s Bill of Rights. Among 1954, she said. those rights, she said, is a child’s right “If you have your values, you haven’t to be “attuned to”. She explained that as lost the war,” an elder would once share the capacity of the caregiver to read the with her. But those who do not have a child’s cues and respond to them accordwell-formed value system have no interingly. nal compass to tell them right or wrong. Children have the right to be nurtured They make decisions based on what they and live free from stress. Abandonment see, and depend on things outside of and neglect are one of the top causes of themselves for guidance. They seek hapsuicide, Middleton-Moz said. piness where it cannot be found. Children need love and limits. They She shared the values of her Anishnabe need to be nurtured and they need the people: Respect, cooperation, gratitude, word no. spirituality, honesty, humility, compasThey need to have a voice, and to be sion, responsibility, inclusion and belongheard. They need responsibility and acing, kindness and bravery. They are the countability; to feel pride in their accomsame values shared by many Indigenous plishments; to make decisions and learn communities the world over. from their mistakes; to have mentors The values of the oppressor were then and patient teachers; to become indepenshared: Might is right; my way or the dent a little at a time, and be supported highway; the blame game; them vs us; through normal developmental stages; to I know what’s right for you; ownership; have boundaries and know the difference the haves and have nots; me, not we; between nurturing and sexuality. highly competitive; punishment; not non Sexual abuse is one of the leading conconformity; survival of the strongest; tributors of suicide, Middleton-Moz said. secrets hidden behind the mask of high Children, she said, needed the five A’s to moral standards; don’t feel; exclusion for grow and be happy, and to have the “scaf- speaking up or questioning; be like me in folding” to build their lives on: Attention, thought, action and beliefs; and there is attunement, acceptance, appreciation and no room for differences. affection. Continued on page 5.

Union for commercial fishermen say one or two corporations are dominating representation on the herring industry’s advisory board. President tells DFO Minister Gail Shea that she’s getting advice that doesn’t reflect broad interests nor lend itself to good governance with inclusive decision-making.

Fishermen’s union casts doubt on herring industry advisory board’s interests By Debora Steel Ha-Shilth-Sa Reporter A letter addressed to Gail Shea, minister of Fisheries and Oceans Canada, says the Herring Industry Advisory Board is being controlled by corporate interests at the cost of independent commercial fisherman. The letter, dated April 9, says the “consensus advice” that the government thinks it is getting from a broad range of stakeholders, is in fact advice from only one or two corporations that control the licenses and these corporations have stacked the HIAB with their own representatives. The letter comes from the United Fishermen &amp; Allied Workers’ Union (UFAWU/Unifor) through President Kim Olsen and asks “in reality, whose interest does HIAB represent?” The Terms of Reference for HIAB put 5 elected seine, 5 elect gillnet, 4 unelected processors, and 1 HCRS representative on the membership. When one company owns some 226 herring licenses and controls a good deal more and independent fishermen own on average 1 or 2 licences each, who is electing the seine and gillnet representatives? “When almost every herring processor of any size has been consolidated under one company, what interests do the 4 processor members represent? It appears that

one interest dominates HIAB…. When one corporate shareholder gets 226 votes to elect advisory members, this is not democracy and this is exactly the concern fishermen are raising.” The letter says the situation doesn’t lend itself to good governance with inclusive and transparent decision-making. Olsen writes that coastal communities, First Nations and active independent fishermen’s interest have been trampled to the point that their financial viability in a billion dollar industry is in serious question. Last summer, when DFO consulted with HIAB on a more inclusive advisory, to build collaborative understanding with First Nations, the HIAB refused, the letter reads. Olsen said it was because HIAB would no longer be able to fully control the advice given to government. HIAB had also threatened to take First Nations to court over last year’s injunction, writes Olsen. “The UFAWU-Unifor has been at HIAB meetings when independent fishermen have walked out because there was no consensus, yet the processors forced an issue anyways and passed it, because it was in the processors best interest, but in fact was not in the fishermen’s best interest. Olsen said in closing that there was no consensus advice on managing herring. “When we stop pretending ther is, we can start the process of building it.”