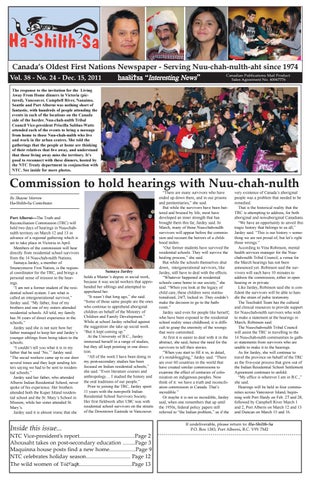 Canada’s Oldest First Nations Newspaper - Serving Nuu-chah-nulth-aht since 1974 Canadian Publications Mail Product Vol. 38 - No. 24 - Dec. 15, 2011 haas^i&gt;sa “Innteresstinng Newss” Sales Agreement No. 40047776 The response to the invitation for the Living Away From Home dinners in Victoria (pictured), Vancouver, Campbell River, Nanaimo, Seattle and Port Alberni was nothing short of fantastic, with hundreds of people attending the events in each of the locations on the Canada side of the border. Nuu-chah-nulth Tribal Council Vice-president Priscilla Sabbas-Watts attended each of the events to bring a message from home to those Nuu-chah-nulth who live and work in the urban centres. She told the gatherings that the people at home are thinking of their relatives that live away, and understand that those living away miss the territory. It’s good to reconnect with these dinners, hosted by the NTC Treaty department in conjunction with NTC. See inside for more photos.

Commission to hold hearings with Nuu-chah-nulth By Shayne Morrow Ha-Shilth-Sa Contributor Port Alberni—The Truth and Reconciliation Commission (TRC) will hold two days of hearings in Nuu-chahnulth territory on March 12 and 13 in advance of a regional gathering which is set to take place in Victoria in April. Members of the commission will hear directly from residential school survivors from the 14 Nuu-chah-nulth Nations. Samaya Jardey, a member of Snuneymuxw First Nation, is the regional coordinator for the TRC, and brings a personal sense of mission to the hearings. “I am not a former student of the residential school system. I am what is called an intergenerational survivor,” Jardey said. “My father, four of my brothers and one of my sisters attended residential schools. All told, my family has 56 years of direct experience in the schools.” Jardey said she is not sure how her father managed to keep her and Jardey’s younger siblings from being taken to the schools. “I couldn’t tell you what it is in my father that he said ‘No,’” Jardey said. “The social workers came up to our door several times and they kept sending letters saying we had to be sent to residential schools.” Jardey said her father, who attended Alberni Indian Residential School, never spoke of his experience. Her brothers attended both the Kuper Island residential school and the St. Mary’s School in Mission, while her sister attended St. Mary’s. Jardey said it is almost ironic that she

Samaya Jardey holds a Master’s degree in social work, because it was social workers that apprehended her siblings and attempted to apprehend her. “It wasn’t that long ago,” she said. “Some of those same people are the ones who continue to apprehend aboriginal children on behalf of the Ministry of Children and Family Development.” While at school Jardey rebelled against the suggestion she take up social work. “But it kept coming up.” At the University of B.C., Jardey immersed herself in a range of studies, but they all kept pointing in one direction. “All of the work I have been doing in my post-secondary studies has been focused on Indian residential schools,” she said. “Even literature courses and anthropology… I studied the history and the oral traditions of our people.” Prior to joining the TRC, Jardey spent 11 years with the non-profit Indian Residential School Survivors Society. Her first fieldwork after UBC was with residential school survivors on the streets of the Downtown Eastside in Vancouver.

“There are many survivors who have ended up down there, and in our prisons and penitentiaries,” she said. But while the survivors have been battered and bruised by life, most have developed an inner strength that has brought them this far, Jardey said. In March, many of those Nuu-chah-nulth survivors will appear before the commission and recount the horrors of a childhood stolen. “Our former students have survived the residential schools. They will survive the healing process,” she said. But while the schools themselves shut down, intergenerational survivors, like Jardey, still have to deal with the effects. “Whatever happened at residential schools came home to our society,” she said. “When you look at the legacy of child care, these children were institutionalized, 24/7, locked in. They couldn’t make the decision to go to the bathroom.” Jardey said even for people like herself, who have been exposed to the residential school reality since childhood, it is difficult to grasp the enormity of the wrongs that were committed. At first it is easier to deal with it in the abstract, she said, hence the need for the survivors to tell their stories. “When you start to fill it in, in detail, it’s mind-boggling,” Jardey said. “There are over 60 countries in the world that have created similar commissions to examine the effect of centuries of colonization on indigenous peoples. Now think of it: we have a truth and reconciliation commission in Canada. That’s incredible.” Or maybe it is not so incredible, Jardey said, when one remembers that up until the 1950s, federal policy papers still referred to “the Indian problem,” as if the

very existence of Canada’s aboriginal people was a problem that needed to be remedied. That is the historical reality that the TRC is attempting to address, for both aboriginal and non-aboriginal Canadians. “We have an opportunity to unveil this tragic history that belongs to us all,” Jardey said. “This is our history – something we are not proud of, but let’s right those wrongs.” According to Vina Robinson, mental health services manager for the Nuuchah-nulth Tribal Council, a venue for the March hearings has not been announced yet. Robinson said the survivors will each have 10 minutes to address the commission, either in open hearing or in private. Like Jardey, Robinson said she is confident the survivors will be able to handle the strain of pubic testimony. The Teechuktl Team has the cultural and clinical resources to provide support for Nuu-chah-nulth survivors who wish to make a statement at the hearings in March, Robinson said. The Nuu-chah-nulth Tribal Council will assist the TRC in travelling to the 14 Nuu-chah-nulth communities to gather statements from survivors who are unable to make it to the hearings. As for Jardey, she will continue to travel the province on behalf of the TRC as the five-year process that grew out of the Indian Residential School Settlement Agreement continues to unfold. “My office is wherever I am in B.C.,” she said. Hearings will be held in four communities across Vancouver Island, beginning with Port Hardy on Feb. 27 and 28, followed by Campbell River March 1 and 2, Port Alberni on March 12 and 13 and Duncan on March 15 and 16.