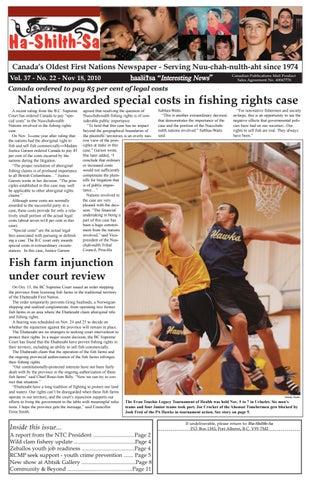 Nations awarded special costs in fishing rights case A recent ruling from the B.C. Supreme Court has ordered Canada to pay “special costs” to the Nuu-chah-nulth Nations involved in the fishing rights case. On Nov. 3—one year after ruling that the nations had the aboriginal right to fish and sell fish commercially—Madam Justice Garson ordered Canada to pay 85 per cent of the costs incurred by the nations during the litigation. “The proper resolution of aboriginal fishing claims is of profound importance to all British Columbians…” Justice Garson wrote in her decision. “The principles established in this case may well be applicable to other aboriginal rights claims.” Although some costs are normally awarded to the successful party in a case, these costs provide for only a relatively small portion of the actual legal costs (about seven to18 per cent in this case). “Special costs” are the actual legal fees associated with pursuing or defending a case. The B.C court only awards special costs in extraordinary circumstances. In this case, Justice Garson

agreed that resolving the question of Nuu-chah-nulth fishing rights is of considerable public importance. “To hold that this case has no impact beyond the geographical boundaries of the plaintiffs’ territories is an overly narrow view of the principles at stake in this case,” Garson wrote. She later added, “I conclude that ordinary or increased costs would not sufficiently compensate the plaintiffs for litigation that is of public importance…” Nations involved in the case are very pleased with the decision. “The financial undertaking in being a part of this case has been a huge commitment from the nations involved,” said Vicepresident of the Nuuchah-nulth Tribal Council, Priscilla

Sabbas-Watts. “This is another extraordinary decision that demonstrates the importance of the case and the position of the Nuu-chahnulth nations involved.” Sabbas-Watts said.

“For non-native fishermen and society at-large, this is an opportunity to see the negative effects that governmental policies have had on our societies...Our rights to sell fish are real. They always have been.”

Fish farm injunction under court review On Oct. 15, the BC Supreme Court issued an order stopping the province from licensing fish farms in the traditional territory of the Ehattesaht First Nation. The order temporarily prevents Grieg Seafoods, a Norwegian shipping and seafood conglomerate, from operating two former fish farms in an area where the Ehattesaht claim aboriginal title and fishing rights. A hearing was scheduled on Nov. 24 and 25 to decide on whether the injunction against the province will remain in place. The Ehattesaht are no strangers to seeking court intervention to protect their rights. In a major recent decision, the BC Supreme Court has found that the Ehattesaht have proven fishing rights in their territory, including an ability to sell fish commercially. The Ehattesaht claim that the operation of the fish farms and the ongoing provincial authorization of the fish farms infringes their fishing rights. “Our constitutionally-protected interests have not been fairly dealt with by the province in the ongoing authorization of these fish farms” said Chief Rose-Ann Billy. “Now we can try to correct that situation.” “Ehattesaht have a long tradition of fighting to protect our land and waters. Our rights can’t be disregarded when these fish farms operate in our territory, and the court’s injunction supports our efforts to bring the government to the table with meaningful solutions. I hope the province gets the message,” said Councillor Ernie Smith.

The Evan Touchie Legacy Tournament of Health was held Nov. 5 to 7 in Ucluelet. Six men’s teams and four Junior teams took part. Joe Crocker of the Ahousat Timebermen gets blocked by Josh Fred of the PA Hawks in tournament action. See story on page 9.