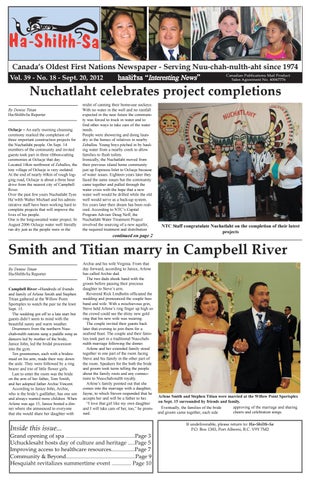 Nuchatlaht celebrates project completions By Denise Titian Ha-Shilth-Sa Reporter Oclucje – An early morning cleansing ceremony marked the completion of three important construction projects for the Nuchatlaht people. On Sept. 14 members of the community and invited guests took part in three ribbon-cutting ceremonies at Oclucje that day. Located 14km northwest of Zeballos, the tiny village of Oclucje is very isolated. At the end of nearly 60km of rough logging road, Oclucje is about a three hour drive from the nearest city of Campbell River. Over the past few years Nuchatlaht Tyee Ha’wilth Walter Michael and his administrative staff have been working hard to complete projects that will improve the lives of his people. One is the long-awaited water project. In August 2006 Oclucje water well literally ran dry just as the people were in the

midst of canning their home-use sockeye. With no water in the well and no rainfall expected in the near future the community was forced to truck in water and to find other ways to take care of the water needs. People were showering and doing laundry in the homes of relatives in nearby Zeballos. Young boys pitched in by hauling water from a nearby creek to allow families to flush toilets. Ironically, the Nuchatlaht moved from their previous island home community just up Espinoza Inlet to Oclucje because of water issues. Eighteen years later they faced the same issues but the community came together and pulled through the water crisis with the hope that a new water well would be drilled while the old well would serve as a back-up system. Six years later their dream has been realized. According to NTC’s Capital Program Advisor Doug Neff, the Nuchatlaht Water Treatment Project involved the sourcing of a new aquifer, the required treatment and distribution

NTC Staff congratulate Nuchatlaht on the completion of their latest projects

Smith and Titian marry in Campbell River By Denise Titian Ha-Shilth-Sa Reporter Campbell River –Hundreds of friends and family of Arlene Smith and Stephen Titian gathered at the Willow Point Sportsplex to watch the pair tie the knot Sept. 15. The wedding got off to a late start but guests didn’t seem to mind with the beautiful sunny and warm weather. Drummers from the northern Nuuchah-nulth nations sang a paddle song as dancers led by mother of the bride, Janice John, led the bridal procession into the gym. Ten groomsmen, each with a bridesmaid on his arm, made their way down the aisle. They were followed by a ring bearer and trio of little flower girls. Last to enter the room was the bride on the arm of her father, Tom Smith, and her adopted father Archie Vincent. According to Janice John, Archie, who is the bride’s godfather, has one son and always wanted more children. When Arlene was age 15, Janice hosted a dinner where she announced to everyone that she would share her daughter with

Archie and his wife Virginia. From that day forward, according to Janice, Arlene has called Archie dad. The two dads shook hand with the groom before passing their precious daughter to Steve’s arm. Reverend Rick Lindholm officiated the wedding and pronounced the couple husband and wife. With a mischievous grin, Steve held Arlene’s ring finger up high so the crowd could see the shiny new gold ring that his new wife was wearing. The couple invited their guests back later that evening to join them for a seafood feast. The couple and their families took part in a traditional Nuu-chahnulth marriage following the dinner. Arlene and her extended family stood together in one part of the room facing Steve and his family in the other part of the room. Speakers for the both the bride and groom took turns telling the people about the family roots and any connections to Nuu-chah-nulth royalty. Arlene’s family pointed out that she comes into the marriage with a daughter, Jayne, to which Steven responded that he accepts her and will be a father to her. “I love that girl like my own daughter and I will take care of her, too,” he promised.

Arlene Smith and Stephen Titian were married at the Willow Point Sportsplex on Sept. 15 surrounded by friends and family. approving of the marriage and sharing Eventually, the families of the bride cheers and celebration songs. and groom came together, each side If undeliverable, please return to: Ha-Shilth-Sa P.O. Box 1383, Port Alberni, B.C. V9Y 7M2