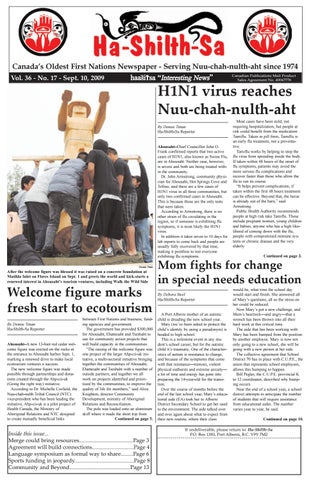 H1N1 virus reaches Nuu-chah-nulth-aht By Denise Titian Ha-Shilth-Sa Reporter Ahousaht–Chief Councillor John O. Frank confirmed reports that two active cases of H1N1, also known as Swine Flu, are in Ahousaht. Neither case, however, is severe and both are being treated within the community. Dr. John Armstrong, community physician for Ahousaht, Hot Springs Cove and Tofino, said there are a few cases of H1N1 virus in all three communities, but only two confirmed cases in Ahousaht. This is because those are the only tests that were taken. According to Armstrong, there is no other strain of flu circulating in the region, so if someone is exhibiting flu symptoms, it is most likely the H1N1 virus. In addition it takes seven to 10 days for lab reports to come back and people are usually fully recovered by that time, making it pointless to test everyone exhibiting flu symptoms. Denise Titian

After the welcome figure was blessed it was raised on a concrete foundation at Matilda Inlet on Flores Island on Sept. 1 and greets the world and kick-starts a renewed interest in Ahousaht’s tourism ventures, including Walk the Wild Side

Welcome figure marks fresh start to ecotourism By Denise Titian Ha-Shilth-Sa Reporter Ahousaht–A new 12-foot red cedar welcome figure was erected on the rocks at the entrance to Ahousaht harbor Sept. 1, marking a renewed drive to make local ecotourism ventures a success. The new welcome figure was made possible through partnerships and donations created through the Ahp-cii-uk (Going the right way) initiative. According to Dr. Michelle Corfield, the Nuu-chah-nulth Tribal Council (NTC) vice-president who has been leading the initiative, Ahp-cii-uk is a pilot project of Health Canada, the Ministry of Aboriginal Relations and NTC designed to create mutually beneficial links

between First Nations and business, funding agencies and government. The government has provided $300,000 for Ahousaht, Ehattesaht and Tseshaht to use for community action projects that will build capacity in the communities. “The raising of the welcome figure was one project of the larger Ahp-cii-uk initiative, a multi-sectoral initiative bringing together the communities of Ahousaht, Ehattesaht and Tseshaht with a number of outside partners, and together we all work on projects identified and prioritized by the communities, to improve the quality of life for members,” said Alixe Knighton, director Community Development, ministry of Aboriginal Relations and Reconciliation. The pole was loaded onto an aluminum skiff where it made the short trip from Continued on page 5.

Most cases have been mild, not requiring hospitalization, but people at risk could benefit from the medication Tamiflu. Taken in pill form, Tamiflu is an early flu treatment, not a preventative. Tamiflu works by helping to stop the flu virus from spreading inside the body. If taken within 48 hours of the onset of flu symptoms, patients may avoid the more serious flu complications and recover faster than those who allow the flu to run its course. “It helps prevent complications; if taken within the first 48 hours treatment can be effective. Beyond that, the horse is already out of the barn,” said Armstrong. Public Health Authority recommends people at high risk take Tamiflu. Those include pregnant women, young children and babies, anyone who has a high likelihood of coming down with the flu, people with compromised immune systems or chronic disease and the very elderly. Continued on page 3.

Mom fights for change in special needs education By Debora Steel Ha-Shilth-Sa Reporter A Port Alberni mother of an autistic child is dreading the new school year. Mary (we’ve been asked to protect the child’s identity by using a pseudonym) is headed to high school. This is a milestone event in any student’s school career, but for the autistic child it’s traumatic. One of the characteristics of autism is resistance to change, and because of the symptoms that come with that resistance—tremors, violent physical outbursts and extreme anxiety— a lot of time and energy has gone into preparing the 14-year-old for the transition. Over the course of months before the end of the last school year, Mary’s educational aide (EA) took her to Alberni District Secondary School to get her used to the environment. The aide talked over and over again about what to expect from their new routine, where their class

would be, what time the school day would start and finish. She answered all of Mary’s questions, all so the stress on her could be reduced. Now Mary’s got a new challenge, and Mom’s heartsick—and angry—that a wrench has been thrown into all their hard work at this critical time. The aide that has been working with Mary has been bumped from the position by another employee. Mary is now not only going to a new school, she will be going with a new person at her side. The collective agreement that School District 70 has in place with C.U.P.E., the union that represents school employees, allows this bumping to happen. Bill Pegler, the C.U.P.E. provincial K to 12 coordinator, described why bumping occurs. Near the end of a school year, a school district attempts to anticipate the number of students that will require assistance from educational aides. The number varies year to year, he said. Continued on page 10.