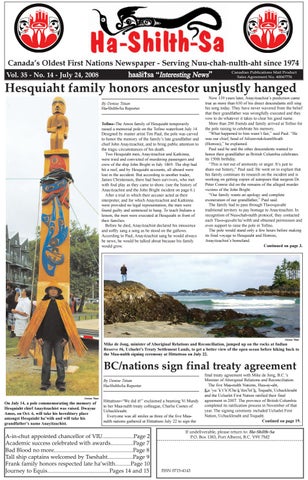 Hesquiaht family honors ancestor unjustly hanged By Denise Titian Ha-Shilth-Sa Reporter Tofino–The Amos family of Hesquiaht temporarily raised a memorial pole on the Tofino waterfront July 14. Designed by master artist Tim Paul, the pole was carved to honor the memory of the family’s late grandfather and chief John Anayitzachist, and to bring public attention to the tragic circumstances of his death. Two Hesquiaht men, Anayitzachist and Katkinna, were tried and convicted of murdering passengers and crew of the ship John Bright in July 1869. The ship had hit a reef, and by Hesquiaht accounts, all aboard were lost in the accident. But according to another trader, James Christenson, there had been survivors, who met with foul play as they came to shore. (see the history of Anayitzachist and the John Bright incident on page 6.) After a trial in which their accuser acted as their interpreter, and for which Anayitzachist and Katkinna were provided no legal representation, the men were found guilty and sentenced to hang. To teach Indians a lesson, the men were executed at Hesquiaht in front of their families. Before he died, Anayitzachist declared his innocence and softly sang a song as he stood on the gallows. According to Paul, Anayitzachist sang he would always be news; he would be talked about because his family would grow.

Now 139 years later, Anayitzachist’s prediction came true as more than 650 of his direct descendants still sing his song today. They have never wavered from the belief that their grandfather was wrongfully executed and they vow to do whatever it takes to clear his good name. More than 200 friends and family arrived at Tofino for the pole raising to celebrate his memory. “What happened to him wasn’t fair,” said Paul. “He was our chief, head of Atl-eer-tuk-kumlth-ath (Homiss),” he explained. Paul said he and the other descendents wanted to honor their grandfather as British Columbia celebrates its 150th birthday. “This is not out of animosity or anger. It’s just to share our history,” Paul said. He went on to explain that his family continues its research on the incident and is working on getting copies of autopsies that surgeon Dr. Peter Comrie did on the remains of the alleged murder victims of the John Bright. “Our family wants an apology and complete exoneration of our grandfather,” Paul said. The family had to pass through Tla-o-qui-aht traditional territory to pay homage to Anayitzachist. In recognition of Nuu-chah-nulth protocol, they contacted each Tla-o-qui-aht ha’wilth and obtained permission and even support to raise the pole in Tofino. The pole would stand only a few hours before making its final voyage to Hesquiaht and Homiss, Anayitzachist’s homeland. Continued on page 3.

Mike de Jong, minister of Aboriginal Relations and Reconciliation, jumped up on the rocks at Indian Reserve #6, Ucluelet’s Treaty Settlement Lands, to get a better view of the open ocean before hiking back to the Maa-nulth signing ceremony at Hittattsoo on July 22.

Hittattsoo–“We did it!” exclaimed a beaming Vi Mundy to her Maa-nulth treaty colleague, Charlie Cootes of Uchucklesaht. Everyone was all smiles as three of the five Maanulth nations gathered at Hittattsoo July 22 to sign the