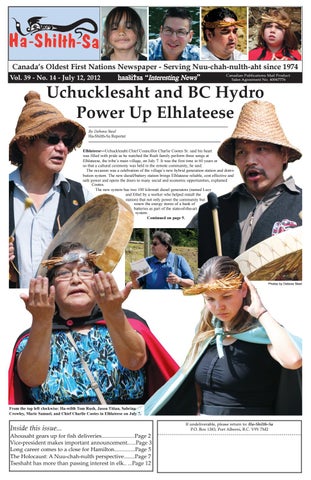 Uchucklesaht and BC Hydro Power Up Elhlateese By Debora Steel Ha-Shilth-Sa Reporter Elhlateese—Uchucklesaht Chief Councillor Charlie Cootes Sr. said his heart was filled with pride as he watched the Rush family perform three songs at Elhlateese, the tribe’s main village, on July 7. It was the first time in 60 years or so that a cultural ceremony was held in the remote community, he said. The occasion was a celebration of the village’s new hybrid generation station and distribution system. The new diesel/battery station brings Elhlateese reliable, cost effective and safe power and opens the doors to many social and economic opportunities, explained Cootes. The new system has two 100 kilowatt diesel generators (named Lucy and Ethel by a worker who helped install the station) that not only power the community but renew the energy stores of a bank of batteries as part of the state-of-the-art system. Continued on page 9.