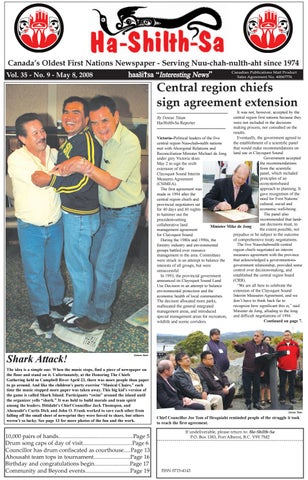 Central region chiefs sign agreement extension It was not, however, accepted by the central region first nations because they By Denise Titian were not included in the decisionHa-Shilth-Sa Reporter making process, nor consulted on the results. Eventually, the government agreed to Victoria–Political leaders of the five the establishment of a scientific panel central region Nuu-chah-nulth nations that would make recommendations on met with Aboriginal Relations and land use in Clayoquot Sound. Reconciliation Minister Michael de Jong Government accepted under grey Victoria skies the recommendations May 2 to sign the sixth from the scientific extension of the panel, which included Clayoquot Sound Interim principles of an Measures Agreement ecosystem-based (CSIMEA). approach to planning. It The first agreement was gave recognition of the made in 1994 after the need for First Nations’ central region chiefs and cultural, social and provincial negotiators sat economic well-being. for 40 days and 40 nights The panel also to hammer out the recommended that landprecedent-setting use decisions must, to collaborative land Minister Mike de Jong the extent possible, not management agreement prejudice or be subject to the outcome for Clayoquot Sound. of comprehensive treaty negotiations. During the 1980s and 1990s, the The five Nuu-chah-nulth central forestry industry and environmental region chiefs negotiated an interim groups battled over resource measures agreement with the province management in the area. Committees that acknowledged a government-towere struck in an attempt to balance the government relationship, provided some interests of all groups, but were control over decision-making, and unsuccessful. established the central region board In 1993, the provincial government (CRB). announced its Clayoquot Sound Land “We are all here to celebrate the Use Decision in an attempt to balance extension of the Clayoquot Sound environmental protection and the Interim Measures Agreement, and we economic health of local communities. don’t have to think back far to The decision allocated more parks, recognize how significant this is,” said reallocated the general integrated Minister de Jong, alluding to the long management areas, and introduced and difficult negotiations of 1994. special management areas for recreation, Continued on page 7. wildlife and scenic corridors.

The idea is a simple one: When the music stops, find a piece of newspaper on the floor and stand on it. Unfortunately, at the Honoring The Chiefs Gathering held in Campbell River April 23, there was more people than paper to go around. And like the children’s party exercise “Musical Chairs,” each time the music stopped more paper was taken away. This big kid’s version of the game is called Shark Island. Participants “swim” around the island until the organizer yells “shark.” It was held to build morale and team spirit among the leaders. Ditidaht’s Chief Councillor Jack Thomspon, and Ahousaht’s Curtis Dick and John O. Frank worked to save each other from falling off the small sheet of newsprint they were forced to share, but others weren’t so lucky. See page 13 for more photos of the fun and the work.