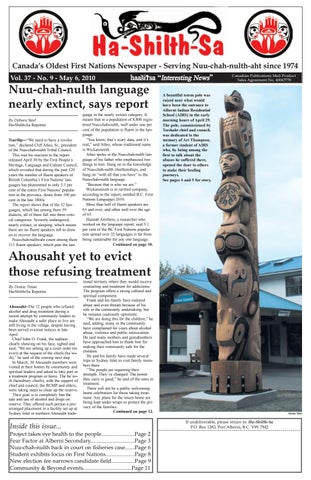 Nuu-chah-nulth language nearly extinct, says report By Debora Steel Ha-Shilth-Sa Reporter Tsartlip—“We need to have a revolution,” declared Cliff Atleo, Sr., president of the Nuu-chah-nulth Tribal Council. This was his reaction to the report released April 30 by the First People’s Heritage, Language and Culture Council, which revealed that during the past 120 years the number of fluent speakers of British Columbia’s First Nations’ languages has plummeted to only 5.1 per cent of the entire First Nations’ population in the province, down from 100 per cent in the late 1800s. The report shows that of the 32 languages, which has among them 59 dialects, all of them fall into three critical categories: Severely endangered, nearly extinct, or sleeping, which means there are no fluent speakers left to draw on to recover the language. Nuu-chah-nulth-aht count among them 115 fluent speakers, which puts the lan-

guage in the nearly extinct category. It means that in a population of 8,800 registered Nuu-chah-nulth, well under one per cent of the population is fluent in the language. “You know, that’s scary data, and it’s real,” said Atleo, whose traditional name is Wickaninnish. Atleo spoke in the Nuu-chah-nulth language of his father who emphasized two things to him: Hang on to the knowledge of Nuu-chah-nulth chieftainships, and hang on “with all that you have” to the Nuu-chah-nulth language. “Because that is who we are.” Wickaninnish is in rarified company, according to the report, entitled B.C. First Nations Languages 2010. More than half of fluent speakers are 65 and over, and often well over the age of 65. Hannah Amrhein, a researcher who worked on the language report, said 5.1 per cent of the BC First Nations population spread over 32 languages is far from being sustainable for any one language. Continued on page 10.

A beautiful totem pole was raised near what would have been the entrance to Alberni Indian Residential School (AIRS) in the early morning hours of April 29. The pole, commissioned by Tseshaht chief and council, was dedicated to the memory of Art Thompson, a former student of AIRS who, by being among the first to talk about the abuses he suffered there, opened the door to others to make their healing journeys. See pages 4 and 5 for story.

Ahousaht yet to evict those refusing treatment By Denise Titian Ha-Shilth-Sa Reporter Ahousaht–The 12 people who refused alcohol and drug treatment during a recent attempt by community leaders to make Ahousaht a safer place to live are still living in the village, despite having been served eviction notices in late April. Chief John O. Frank, the sadness clearly showing on his face, sighed and said, “We are setting up a court order (to evict) at the request of the chiefs (ha’wiih),” he said of the coming next step. In March, 30 Ahousaht members were visited at their homes by community and spiritual leaders and asked to take part in a treatment program or leave. The ha’wiih (hereditary chiefs), with the support of chief and council, the RCMP and elders, were taking steps to clean up the reserve. Their goal is to completely ban the sale and use of alcohol and drugs on reserve. They offered each person a prearranged placement in a facility set up at Sydney Inlet in northern Ahousaht tradi-

tional territory where they would receive counseling and treatment for addictions. The program offers a strong cultural and spiritual component. Frank and his family have endured abuse and even threats because of his role in the community undertaking, but he remains cautiously optimistic. “We are doing this for the children,” he said, adding, many in the community have complained for years about alcohol abuse, violence and public intoxication. He said many mothers and grandmothers have approached him to thank him for making their community safe for the children. He and his family have made several trips to Sydney Inlet to visit family members there. “The people are regaining their strength. They’ve changed. The power they carry is good,” he said of the ones in treatment. There will not be a public welcoming home celebration for those taking treatment. Any plans for the return home are being kept under wraps to protect the privacy of the families. Continued on page 12.