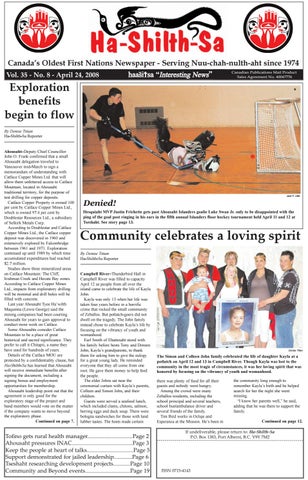 Exploration benefits begin to flow By Denise Titian Ha-Shilth-Sa Reporter Ahousaht–Deputy Chief Councillor John O. Frank confirmed that a small Ahousaht delegation traveled to Vancouver mid-March to sign a memorandum of understanding with Catface Copper Mines Ltd. that will allow them unfettered access to Catface Mountain, located in Ahousaht traditional territory, for the purpose of test drilling for copper deposits. Catface Copper Property is owned 100 per cent by Catface Copper Mines Ltd., which is owned 97.4 per cent by Doublestar Resources Ltd., a subsidiary of Selkirk Metals Corp. According to Doublestar and Catface Copper Mines Ltd., the Catface copper deposit was discovered in 1960 and extensively explored by Falconbridge between 1961 and 1971. Exploration continued up until 1989 by which time accumulated expenditures had reached $2.7 million. Studies show three mineralized areas on Catface Mountain: The Cliff, Irishman Creek and Hecate Bay zones. According to Catface Copper Mines Ltd., impacts from exploratory drilling will be minimal and drill holes will be filled with concrete. Last year Ahousaht Tyee Ha’wilth Maquinna (Lewis George) said the mining companies had been courting Ahousaht for years to gain approval to conduct more work on Catface. Some Ahousahts consider Catface Mountain to be a place of great historical and sacred significance. They prefer to call it Chitapii, a name they have used for hundreds of years. Details of the Catface MOU are protected by a confidentiality clause, but Ha-Shilth-Sa has learned that Ahousaht will receive immediate benefits after signing the document, including a signing bonus and employment opportunities for membership. Ahousaht leadership point out that the agreement is only good for the exploratory stage of the project and band members would vote on the matter if the company wants to move beyond the exploratory phase. Continued on page 7.

Denied! Hesquiaht MVP Justin Frichette gets past Ahousaht Islanders goalie Luke Swan Jr. only to be disappointed with the ping of the goal post ringing in his ears in the fifth annual Islanders floor hockey tournament held April 11 and 12 at Tseshaht. See story page 13.

Community celebrates a loving spirit By Denise Titian Ha-Shilth-Sa Reporter Campbell River–Thunderbird Hall in Campbell River was filled to capacity April 12 as people from all over the island came to celebrate the life of Kayla John. Kayla was only 13 when her life was taken four years before in a horrific crime that rocked the small community of Zeballos. But potlatch-goers did not dwell on the tragedy. The John family instead chose to celebrate Kayla’s life by focusing on the vibrancy of youth and womanhood. Earl Smith of Ehattesaht stood with his family before hosts Tony and Doreen John, Kayla’s grandparents, to thank them for asking him to give the eulogy for a great young lady. He reminded everyone that they all come from one root. He gave them money to help feed the people. The elder Johns sat near the ceremonial curtain with Kayla’s parents, Colleen and Simon John, and their children. Guests were served a seafood lunch, which included clams, chitons, salmon, herring eggs and duck soup. There were bologna sandwiches for those with land lubber tastes. The hosts made certain

The Simon and Colleen John family celebrated the life of daughter Kayla at a potlatch on April 12 and 13 in Campbell River. Though Kayla was lost to the community in the most tragic of circumstances, it was her loving spirit that was honored by focusing on the vibrancy of youth and womanhood. there was plenty of food for all their guests and nobody went hungry. Among the crowd were many Zeballos residents, including the school principal and several teachers, school bus/ambulance driver and several friends of the family. Tim Bird works in Ocluje and Esperanza at the Mission. He’s been in

the community long enough to remember Kayla’s birth and he helped search for her the night she went missing. “I know her parents well,” he said, adding that he was there to support the family. Continued on page 12.