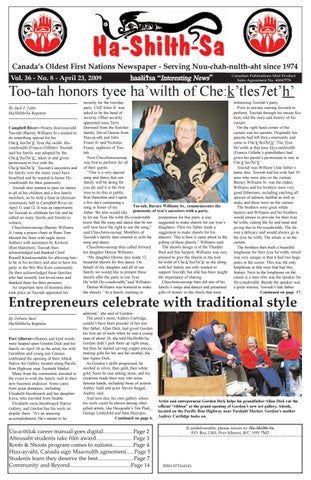 Too-tah honors tyee ha’wilth of Che:k’tles7et’h’ By Jack F. Little Ha-Shilth-Sa Reporter Campbell River—Ninety-four-year-old Too-tah (Barney Williams Sr.) wanted to do something special for his Che:k’tles7et’h’ Tyee Ha’-wilth Hyyoush-tulth (Francis Gillette). Too-tah said his family was adopted by the Che:k’tles7et’h’, taken in and given permission to live with the Che:k’tles7et’h’. Too-tah’s ancestors and his family over the many years have benefited and he wanted to honor Hyyoush-tulth for their generosity. Too-tah also wanted to pass on names to all of his children and a few family members, so he held a feast at Quinsum community hall in Campbell River on April 11 and 12. It was an opportunity for Too-tah to celebrate his life and he called on many family and friends to witness. Cha-chims-sa-nup (Barney Williams Jr.) sang a prayer chant as Remi Tom blessed the floor with eagle down feathers with assistance by Ke-kein (Ron Hamilton). Too-tah then acknowledged and thanked Chief Russell Kwakseestahla for allowing him to be in his territory and also to have his party in the Wei Wai Kum community. He then acknowledged those families who had recently lost loved ones and thanked them for their presence. An important item of business then took place as Too-tah appointed his

security for the two-day party. Cliff Atleo Jr. was asked to be the head of security. Other security appointed were Terry Dorward from the Seitcher family, David Dennis from Huu-ay-aht and John Fraser Jr. and Nicholas Fraser, nephews of Tootah. Next Cha-chims-sa-nup was first to perform for all of their guests. “This is a very special song and dance that our family will be doing for you all, and it is the first time to do this in public. Ron Hamilton and I spent a few days composing a Too-tah, Barney Williams Sr., commemorates the song in honor of my father. We also would like generosity of tyee’s ancestors with a party. to let our Tyee Ha’wilth Hy-yoush-tulth preparation for this party it was know that the song and dance that he too suggested to make shawls for our tyee’s will now have the right to use the song,” daughters. Then my father made a said Cha-chims-sa-nup. Members of suggestion to make shawls for his Too-tah’s family then entered in with the dancers. This is how it came about in the song and dance. gifting of these shawls,” Williams said. Cha-chims-sa-nup then called forward The shawls design is of the Thunder his daughter Denise Williams. Bird and Sea Serpent. Williams was very “My daughter Denise also made 12 pleased to give the shawls to the tyee beautiful shawls for this dance. On ha’wilth of Che:k’tles7et’h’ as she along with her family not only wanted to behalf of my daughter and all of our support Too-tah, but also has been taught family we would like to present these the importance of sharing. shawls after the party to our Tyee Cha-chims-sa-nup then did one of his Ha’wilth Hy-yoush-tulth,”said Williams. family’s songs and dances and presented Denise Williams was honored to make gifts of money to the chiefs that were the shawls. “At a family meeting in

witnessing Too-tah’s party. Prior to anyone coming forward to perform, Too-tah through his emcee Kekein, told the story and history of his curtain. On the right hand corner of the curtain was his parents. Originally his parents had left their community and came to Che:k’tles7et’h’. The Tyee Ha’wilth at that time Hy-yoush-tulth (Francis Gillette’s grandfather) had given his parent’s permission to stay at Che:k’tles7et’h’. Too-tah was William’s late father’s name also. Too-tah and his wife had 10 sons who were also on the curtain. Barney Williams Sr. was the oldest. Williams and his brothers were very good fishermen, including catching all species of salmon, halibut as well as seals, and these were on the curtain. The brothers were great whale hunters and Williams and his brothers would ensure to provide for their tyee ha’wilth, cutting the fin and meat and giving this to Hy-yoush-tulth. The fin was a delicacy and would always go to the tyee ha’wilth. The whale is on the curtain. The brothers then built a beautiful longhouse for their tyee ha’wilth, which was very unique in that it had two huge poles in the centre. This was the only longhouse at that time that had this feature. Next to the longhouse on the cutain is a man who was the speaker for Hy-yoush-tulth. Beside the speaker was a great warrior, Too-tah’s late father. Continued on page 17.

Entrepreneurs celebrate with traditional style By Debora Steel Ha-Shilth-Sa Reporter Port Alberni—Honors and kind words were heaped upon Gordon Dick and his family on April 18 as the artist, his wife Geraldine and young son Cassius celebrated the opening of their Ahtsik Native Art Gallery located along Pacific Rim Highway near Tseshaht Market. Many from the community traveled to the event to wish the family well in their new business endeavor. Some came from great distances, including Elizabeth Steinbrueck and her daughter Kirra, who traveled from Seattle. Elizabeth owns Steinbrueck Native Gallery, and Gordon has his work on display there. “It’s an amazing accomplishment. He’s meant to be

admired,” she said of Gordon. The artist’s mom, Audrey Cartlidge, couldn’t have been prouder of her son. Her father, Allan Dick, had given Gordon his first set of tools when he was a young man of about 18, she told Ha-Shilth-Sa. Gordon didn’t pick them up right away, but then he started carving copper pieces, making gifts for her and her mother, the late Agnes Dick. As Gordon’s skills progressed, he worked in silver, then gold, then white gold. Soon he was setting stone, and his creations made their way into some famous hands, including those of actress Ashley Judd and actor Steven Seagal, Audrey said. And now this, his own gallery where his work could be shown among other gifted artists, like Hesquiaht’s Tim Paul, George Littlechild and Sam Haiyupis. Continued on page 6.