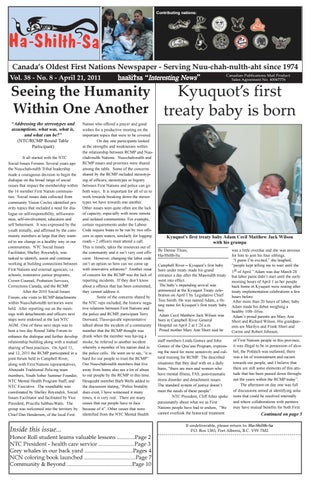 Seeing the Humanity Kyuquot’s first Within One Another treaty baby is born “Addressing the stereotypes and assumptions, what was, what is, and what can be?” (NTC/RCMP Round Table Participant) It all started with the NTC Social Issues Forums. Several years ago the Nuu-chah-nulth Tribal leadership made a courageous decision to begin the dialogue on the broad range of social issues that impact the membership within the 14 member First Nation communities. Social issues data collected from community Vision Circles identified priority topics that included a need for dialogue on self-responsibility, self-awareness, self-involvement, education and self betterment. It was expressed by the youth initially, and affirmed by the community members at large that they wanted to see change in a healthy way in our communities. NTC Social Issues Facilitator, Shelley Royendyk, was tasked to identify, assist and continue working at building connections between First Nations and external agencies, i.e. schools, restorative justice programs, Crown Counsel, Probation Services, Corrections Canada, and the RCMP. After the 2010 Social Issues Forum, site visits to RCMP detachments within Nuu-chah-nulth territories were held. After reporting out on the meetings with detachments and officers next steps were endorsed at the last NTC AGM. One of these next steps was to host a two day Round Table Forum to enhance the dialogue and further develop relationship building along with a mutual sharing of best practices. On April 11, and 12, 2011 the RCMP participated in a joint forum held in Campbell River, along with First Nations representatives, Ahousaht Traditional Policing team members, Youth Sober Summer Founder, NTC Mental Health Program Staff, and NTC Executive. The roundtable was coordinated by Shelley Royendyk, Social Issues Facilitator and facilitated by Vice President, Priscilla Sabbas-Watts. The group was welcomed into the territory by Chief Dan Henderson, of the local First

Nation who offered a prayer and good wishes for a productive meeting on the important topics that were to be covered. On day one participants looked at the strengths and weaknesses within the relationship between RCMP and Nuuchah-nulth Nations. Nuu-chah-nulth and RCMP issues and priorities were shared among the table. Some of the concerns shared by the RCMP included stereotyping of officers, stereotypes or bigotry between First Nations and police can go both ways. It is important for all of us to work towards breaking down the stereotypes we have towards one another. Other issues seen quite often are the lack of capacity, especially with more remote and isolated communities. For example, certain requirements under the Labour Code require boats to be run by two officers in open waters, similarly for logging roads – 2 officers must attend a call. This is timely, takes the resources out of the community and it isn’t very cost efficient. However, changing the labor code isn’t an option so how can we come up with innovative solutions? Another issue of concern for the RCMP was the lack of reporting incidents. If they don’t know about a offence that has been committed, they cannot address it. Some of the concerns shared by the NTC reps included, the historic negative relations between First Nations and the police and RCMP, participant Terry Dorward, Tla-o-qui-aht representative talked about the incident of a community member that the RCMP thought was drunk when the member was having a stroke, he referred to another incident whereby a member of his nation died in the police cells. He went on to say, “it is hard for our people to trust the RCMP”. Our Nuu-chah-nulth members that live away from home also see a lot of abuse to our people by the RCMP in this time. Hesquiaht member Barb Wells added to the discussion stating, “Police brutality does exist, I have witnessed it many times, it is very real. There are many issues that our people have to face because of it”. Other issues that were identified from the NTC Mental Health

Kyuquot’s first treaty baby Adam Cecil Matthew Jack Wilson with his grampa By Denise Titian, Ha-Shilth-Sa Campbell River – Kyuquot’s first baby born under treaty made his grand entrance a day after the Maa-nulth treaty went into effect. The baby’s impending arrival was announced at the Kyuquot Treaty celebration on April 1 by Legislative Chief Tess Smith. He was named Adam, a fitting name for Kyuquot’s first treaty baby boy. Adam Cecil Matthew Jack Wilson was born in Campbell River General Hospital on April 2 at 1:24 a.m. Proud mother Mary Ann Short said he staff members Linda Gomez and John Gomez of the Quu’asa Program, expressing the need for more sensitivity and cultural training for RCMP. The described situations that they deal with on a daily basis, “there are men and women who have mental illness, FAS, post-traumatic stress disorder and detachment issues. The standard system of justice doesn’t meet the needs of these people”. NTC President, Cliff Atleo spoke passionately about what we as First Nations people have had to endure, “We cannot overlook the historical treatment

was a little overdue and she was anxious for him to join his four siblings. “I guess I’m excited,” she laughed, “people kept telling me to wait until the 1st of April.” Adam was due March 28 but labor pains didn’t start until the early morning hours of April 1 as her people back home in Kyuquot were resting after treaty implementation celebrations a few hours before. After more than 20 hours of labor, baby Adam made his debut weighing a healthy 10lb .05oz. Adam’s proud parents are Mary Ann Short and Richard Wilson. His grandparents are Marilyn and Frank Short and Corine and Robert Johnson. of First Nations people in this province, it was illegal to be in possession of alcohol, the Potlatch was outlawed, there was a lot of mistreatment and racism towards our people, and I believe that there are still some elements of this attitude that has been passed down throughout the years within the RCMP today”. The afternoon on day one was full of discussions aimed at identifying solutions that could be resolved internally and where collaborations with partners may have mutual benefits for both First