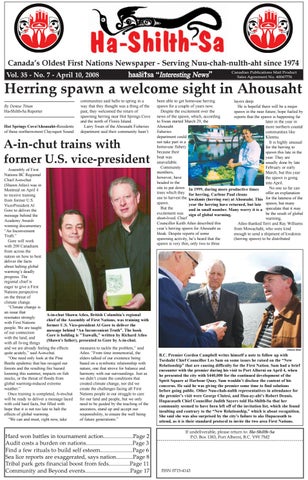 communities said hello to spring in a way that they thought was a thing of the past; they welcomed the return of spawning herring near Hot Springs Cove and the north of Flores Island. Larry Swan of the Ahousaht Fisheries department said their community hasn’t

A-in-chut trains with former U.S. vice-president Assembly of First Nations BC Regional Chief A-in-chut (Shawn Atleo) was in Montreal on April 4 to receive training from former U.S. Vice-President Al Gore to deliver the message behind the Academy Awardwinning documentary “An Inconvenient Truth.” Gore will work with 200 Canadians from across the nation on how to best deliver the facts about halting global warming’s deadly progress. The regional chief is eager to give a First Nations perspective on the threat of climate change. “Climate change is an issue that A-in-chut Shawn Atleo, British Columbia’s regional resonates strongly chief of the Assembly of First Nations, was training with with First Nations former U.S. Vice-president Al Gore to deliver the people. We are taught message behind “An Inconvenient Truth”. The book of our connection Gore is holding is &quot;Tsawalk,&quot; written by Richard Atleo with the land, and (Shawn&#39;s father), presented to Gore by A-in-chut. with all living things and we are already feeling the effects measures to tackle the problem,” said quite acutely,” said A-in-chut. Atleo. “From time immemorial, the “One need only look at the Pine elders talked of our existence being Beetle epidemic that has ravaged our based on a symbiotic relationship with forests and the resulting fire hazard nature, one that strove for balance and looming this summer, impacts on fish harmony with our surroundings. Just as stocks, or the threat of floods from we didn’t create the conditions that global warming-induced extreme created climate change, nor did we weather.” create the challenges facing all First Once training is completed, A-in-chut Nations people in our struggle to care will be ready to deliver a message laced for our land and people, but we only with cold hard facts, but filled with need to be guided by the teaching of the hope that it is not too late to halt the ancestors, stand up and accept our effects of global warming. responsibility, to ensure the well being “We can and must, right now, take of future generations.”

been able to get home-use herring layers deep. spawn for a couple of years now. He is hopeful there will be a major Despite the excitement over the spawn in the near future; hope fueled by news of the spawn, which, according reports that the spawn is happening far to Swan started March 29, the later in the year in Ahousaht more northern coastal fisheries communities like department could Klemtu. not take part in a It is highly unusual home-use fishery for the herring to because their spawn this late in the boat was year. They are unavailable. usually done by late Community February or early members, March, but this year however, have the spawn is going headed to the into April. site to put down In 1999, during more productive times No one so far can trees which they for herring, Carlene Paul cleans offer an explanation use to harvest the kwakmis (herring roe) at Ahousaht. This for the lateness of the spawn. year the herring have returned, but late spawn, but many But the and in small number. Many worry it is a speculate that it may excitement was sign of global warming. be the result of global short-lived. Chief warming. Councillor Keith Atleo described this Atleo thanked Terri and Ray Williams year’s herring spawn for Ahousaht as from Mowachaht, who were kind bleak. Despite reports of some enough to send a shipment of kwakmis spawning activity, he’s heard that the (herring spawn) to be distributed spawn is very thin, only two to three

B.C. Premier Gordon Campbell writes himself a note to follow up with Tseshaht Chief Councillor Les Sam on some issues he raised on the “New Relationship” that are causing difficulty for the First Nation. Sam had a brief encounter with the premier during his visit to Port Alberni on April 4, when he presented the city with $440,000 for the continued development of the Spirit Square at Harbour Quay. Sam wouldn’t disclose the content of his concerns. He said he was giving the premier some time to find solutions before going public. Other Nuu-chah-nulth representatives in attendance for the premier’s visit were George Clutesi, and Huu-ay-aht’s Robert Dennis. Hupacasath Chief Councillor Judith Sayers told Ha-Shilth-Sa that her community seemed to have been left off of the invitation list, which she found insulting and contrary to the “New Relationship,” which is about recognition. She said she was also surprised by the city’s failure to aks Hupacasath to attend, as it is their standard protocol to invite the two area First Nations. If undeliverable, please return to: Ha-Shilth-Sa P.O. Box 1383, Port Alberni, B.C. V9Y 7M2