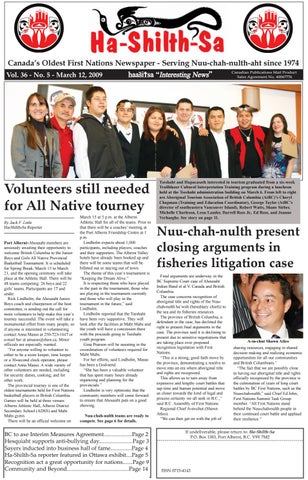 Volunteers still needed for All Native tourney By Jack F. Little Ha-Shilth-Sa Reporter Port Alberni–Ahousaht members are anxiously awaiting their opportunity to welcome British Columbia to the Junior Boys and Girls All Native Provincial Basketball Tournament. It is scheduled for Spring Break, March 15 to March 21, and the opening ceremony will take place at the Athletic Hall. There will be 48 teams competing: 26 boys and 22 girls’ teams. Participants are 17 and under. Rick Lindholm, the Ahousaht Junior Boys coach and chairperson of the host committee, is sending out the call for more volunteers to help make this year’s tourney successful. The event will take a monumental effort from many people, so if anyone is interested in volunteering contact Anna Masso at 250-723-1447 or e-mail her at amasso@shaw.ca. Minor officials are especially wanted. “For anyone willing to volunteer to either to be a score keeper, time keeper or a 30-second clock operator, please contact Anna Masso. A wide variety of other volunteers are needed, including for security duties, cooking, and for other work. The provincial tourney is one of the oldest tournaments held for First Nations basketball players in British Columbia. Games will be held at three venues: Alberni Athletic Hall, Alberni District Secondary School (ADSS) and Maht Mahs gymn. There will be an official welcome on

March 15 at 5 p.m. at the Alberni Athletic Hall for all of the teams. Prior to that there will be a coaches’ meeting at the Port Alberni Friendship Centre at 1 p.m. Lindholm expects about 1,000 participants, including players, coaches and their supporters. The Alberni Valley hotels have already been booked up and there will be some teams that will be billeted out or staying out of town. The theme of this year’s tournament is “Keeping the Dream Alive.” It is respecting those who have played in the past in the tournament, those who are playing in the tournament currently and those who will play in the tournament in the future,” said Lindholm. Lindholm reported that the Tseshaht have been very supportive. They will look after the facilities at Maht Mahs and the youth will have a concession there with the proceeds going to Tseshaht youth program. Gina Pearson will be assisting in the co-ordination of volunteers required for Maht Mahs. For her efforts, said Lindholm, Masso has been a God-send. “She has been a valuable volunteer that has spent many hours already organizing and planning for the provincials.” Lindholm is very optimistic that the community members will come forward to ensure that Ahousaht puts on a good showing. Nuu-chah-nulth teams are ready to compete. See page 6 for details.

Nuu-chah-nulth present closing arguments in fisheries litigation case Final arguments are underway in the BC Supreme Court case of Ahousaht Indian Band et al V. Canada and British Columbia. The case concerns recognition of aboriginal title and rights of the Nuuchah-nulth ha’wiih (hereditary chiefs) to the sea and its fisheries resources. The province of British Columbia, a defendant in the case, has declined the right to present final arguments in the case. The province said it is declining to present due to sensitive negotiations that are taking place over proposed recognition legislation with First Nations. “This is a strong, good faith move by the province, demonstrating a resolve to move into an era where aboriginal title and rights are recognized. This allows us to turn away from expensive and lengthy court battles that sap time and human potential and move us closer towards the kind of legal and process certainty we all seek in B.C.,” said B.C. Assembly of First Nations Regional Chief A-in-chut (Shawn Atleo). “We can then get on with the job of

A-in-chut Shawn Atleo sharing resources, engaging in shared decision making and realizing economic opportunities for all our communities and British Columbians.” “The fact that we are possibly close to having our aboriginal title and rights officially recognized by the province is the culmination of years of long court battles by BC First Nations, such as the Nuu-chah-nulth,” said Chief Ed John, First Nations Summit Task Group member. “All First Nations stand behind the Nuu-chah-nulth people in their continued court battle and applaud their resilience.”