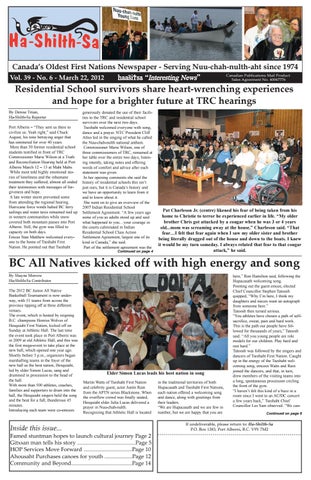 Residential School survivors share heart-wrenching experiences and hope for a brighter future at TRC hearings By Denise Titian, Ha-Shilth-Sa Reporter Port Alberni – “They sent us there to civilize us. Yeah right,” said Chuck August, his tone betraying anger that has simmered for over 40 years. More than 50 former residential school students testified in front of TRC Commissioner Marie Wilson at a Truth and Reconciliation Hearing held at Port Alberni March 12 – 13 at Maht Mahs. While most told highly emotional stories of loneliness and the inhumane treatment they suffered, almost all ended their testimonies with messages of forgiveness and hope. A late winter storm prevented some from attending the regional hearing. Hurricane force winds halted BC ferry sailings and water taxis remained tied up in western communities while snow covered both mountain passes into Port Alberni. Still, the gym was filled to capacity on both days. Emcee Stan Matthew welcomed everyone to the home of Tseshaht First Nation. He pointed out that Tseshaht

generously donated the use of their facilities to the TRC and residential school survivors over the next two days. Tseshaht welcomed everyone with song, dance and a prayer. NTC President Cliff Atleo led in the singing of what he called the Nuu-chah-nulth national anthem. Commissioner Marie Wilson, one of three commissioners of TRC, remained at her table over the entire two days; listening intently, taking notes and offering words of comfort and advice after each statement was given. In her opening comments she said the history of residential schools this isn’t just ours, but it is Canada’s history and we have an opportunity to learn from it and to know about it. She went on to give an overview of the 2007 Indian Residential School Settlement Agreement. “A few years ago some of you as adults stood up and said what happened to you…your courage in the courts culminated in Indian Residential School Class Action Settlement Agreement, largest one of its kind in Canada,” she said. Part of the settlement agreement was the

Pat Charleson Jr. (centre) likened his fear of being taken from his home to Christie to terror he experienced earlier in life. “My older brother Chris got attacked by a cougar when he was 3 or 4 years old...mom was screaming away at the house,” Charleson said. “That fear…I felt that fear again when I saw my older sister and brother being literally dragged out of the house and down to the boats. I knew it would be my turn someday. I always related that fear to that cougar attack,” he said.

BC All Natives kicked off with high energy and song By Shayne Morrow Ha-Shilth-Sa Contributor The 2012 BC Junior All Native Basketball Tournament is now underway, with 51 teams from across the province tipping off at three different venues. The event, which is hosted by reigning B.C. champions Homiss Wolves of Hesquiaht First Nation, kicked off on Sunday at Athletic Hall. The last time the event took place in Port Alberni was in 2009 at old Athletic Hall, and this was the first mega-event to take place at the new hall, which opened one year ago. Shortly before 5 p.m., organizers began marshalling teams in the foyer of the new hall as the host nation, Hesquiaht, led by elder Simon Lucas, sang and drummed in procession to the head of the hall. With more than 500 athletes, coaches, families and supporters to drum into the hall, the Hesquiaht singers held the song and the beat for a full, thunderous 45 minutes. Introducing each team were co-emcees

in the traditional territories of both Hupacasath and Tseshaht First Nations, each nation offered a welcoming song and dance, along with greetings from their leaders. “We are Hupacasath and we are few in number, but we are happy that you are

here,” Ron Hamilton said, following the Hupacasath welcoming song. Pointing out the guest emcee, elected Chief Councillor Stephen Tatoosh quipped, “Why I’m here, I think my daughters and nieces want an autograph from someone here.” Tatoosh then turned serious. “You athletes have chosen a path of selfsacrifice, sweat, pain and hard work. This is the path our people have followed for thousands of years,” Tatoosh said. “All you young people are role models for our children. Play hard and rest hard.” Tatoosh was followed by the singers and dancers of Tseshaht First Nation. Caught up in the energy of the Tseshaht welcoming song, emcees Watts and Rain joined the dancers, and that, in turn, drew members of the visiting teams into a long, spontaneous procession circling the front of the gym. “I haven’t felt this kind of a buzz in a room since I went to an AC/DC concert a few years back,” Tseshaht Chief Councillor Les Sam observed. “We canContinued on page 8