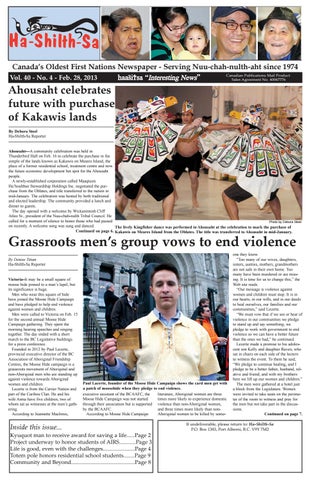 Ahousaht celebrates future with purchase of Kakawis lands By Debora Steel Ha-Shilth-Sa Reporter Ahousaht—A community celebration was held in Thunderbird Hall on Feb. 16 to celebrate the purchase in fee simple of the lands known as Kakawis on Meares Island, the place of a former residential school, treatment centre and now the future economic development hot spot for the Ahousaht people. A newly-established corporation called Maaqtusis Ha’houlthee Stewardship Holdings Inc. negotiated the purchase from the Oblates, and title transferred to the nation in mid-January. The celebration was hosted by both traditional and elected leadership. The community provided a lunch and dinner to guests. The day opened with a welcome by Wickaninnish Cliff Atleo Sr., president of the Nuu-chah-nulth Tribal Council. He called for a moment of silence to honor those who had passed Photo by Debora Steel on recently. A welcome song was sung and danced. The lively Kingfisher dance was performed in Ahousaht at the celebration to mark the purchase of Continued on page 6. Kakawis on Meares Island from the Oblates. The title was transferred to Ahousaht in mid-January.

Grassroots men’s group vows to end violence By Denise Titian Ha-Shilth-Sa Reporter Victoria–It may be a small square of moose hide pinned to a man’s lapel, but its significance is huge. Men who wear this square of hide have joined the Moose Hide Campaign and have pledged to help end violence against women and children. Men were called to Victoria on Feb. 15 for the second annual Moose Hide Campaign gathering. They spent the morning hearing speeches and singing together. The day ended with a short march to the BC Legislative buildings for a press conference. Founded in 2012 by Paul Lecerte, provincial executive director of the BC Association of Aboriginal Friendship Centres, the Moose Hide campaign is a grassroots movement of Aboriginal and non-Aboriginal men who are standing up against violence towards Aboriginal women and children. Lecerte is from the Carrier Nation and part of the Caribou Clan. He and his wife Asma have five children, two of whom sat as witnesses at the men’s gathering. According to Jeannette MacInnis,

one they know. “Too many of our wives, daughters, sisters, aunties, mothers, grandmothers are not safe in their own home. Too many have been murdered or are missing. It is time for us to change this,” the Web site reads. “Our message is violence against women and children must stop. It is in our hearts, in our wills, and in our deeds to heal ourselves, our families and our communities,” said Lecerte. “We must vow that if we see or hear of violence in our communities we pledge to stand up and say something; we pledge to work with government to end violence so we can have a better future than the ones we had,” he continued. Lecerte made a promise to his adolescent son Kelly and daughter Raven, who sat in chairs on each side of the lectern to witness the event. To them he said, “We pledge to continue healing, and I pledge to be a better father, husband, relative and friend; and with my brothers here we lift up our women and children.” The men were gathered at a hotel just a block from the Legislature. Women were invited to take seats on the perimeter of the room to witness and pray for the men but not take part in the discussions. Continued on page 7.