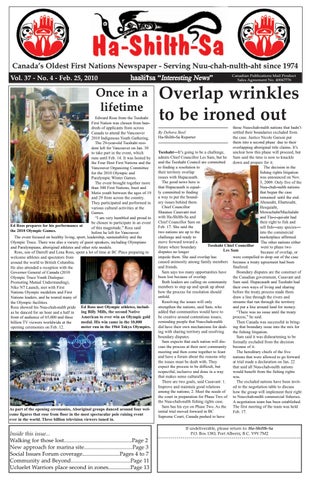 Once in a lifetime Edward Ross from the Tseshaht First Nation was chosen from hundreds of applicants from across Canada to attend the Vancouver 2010 Indigenous Youth Gathering. The 29-year-old Tseshaht resident left for Vancouver on Jan. 30 to take part in the event, which runs until Feb. 14. It was hosted by the Four Host First Nations and the Vancouver Organizing Committee for the 2010 Olympic and Paralympic Winter Games. The event brought together more than 300 First Nations, Inuit and Metis youth between the ages of 19 and 29 from across the country. They participated and performed in various cultural activities at the Games. “I am very humbled and proud to be chosen to participate in an event Ed Ross prepares for his performance at of this magnitude,” Ross said the 2010 Olympic Games. before he left for Vancouver. The event focused on healthy living, sport, leadership, sustainability and the Olympic Truce. There was also a variety of guest speakers, including Olympians and Paralympians, aboriginal athletes and other role models. Ross, son of Darrell and Lena Ross, spent a lot of time at BC Place preparing to welcome athletes and spectators from around the world to British Columbia. He also attended a reception with the Governor General of Canada (2010 Olympic Truce Youth Dialogue: Promoting Mutual Understanding), Nike N7 Launch, met with First Nations Olympic medalists and First Nations leaders, and he toured many of the Olympic facilities. Ross showed his Nuu-chah-nulth pride Ed Ross met Olympic athletes, including Billy Mills, the second Native as he danced for an hour and a half in American to ever win an Olympic gold front of audience of 65,000 and three medal. His win came in the 10,000 billion TV viewers worldwide at the meter run in the 1964 Tokyo Olympics. opening ceremonies on Feb. 12.

As part of the opening ceremonies, Aboriginal groups danced around four welcome figures that rose from floor in the most spectacular pole raising event ever in the world. Three billion television viewers tuned in.

Overlap wrinkles to be ironed out those Nuu-chah-nulth nations that hadn’t settled their boundaries excluded from the case. Justice Nicole Garson put them into a second phase due to their overlapping aboriginal title claims. It’s Tseshaht—It’s going to be a challenge, unclear how this phase will proceed, but admits Chief Councillor Les Sam, but he Sam said the time is now to knuckle and the Tseshaht Council are committed down and prepare for it. to finding a resolution to The decision in the their territory overlap fishing rights litigation issues with Hupacasath. was announced on Nov. The good news here is 3, 2009. Only five of the that Hupacasath is equalNuu-chah-nulth nations ly committed to finding that began the case a way to put the boundremained until the end. ary issues behind them. Ahousaht, Ehattesaht, Chief Councillor Hesquiaht, Shaunee Casavant met Mowachaht/Muchalaht with Ha-Shilth-Sa and and Tla-o-qui-aht had Chief Councillor Sam on their right to fish and Feb. 17. She said the sell fish—any species— two nations are up to the into the commercial challenge and ready to marketplace affirmed. move forward toward a The other nations either Tseshaht Chief Councillor future where boundary went to phase two Les Sam disputes no longer because of overlap, or impede them. She said overlap has were compelled to drop out of the case caused animosity among family members because a treaty agreement had been and friends. finalized. Sam says too many opportunities have Boundary disputes are the construct of been lost because of overlap. the Canadian government, Casavant and Both leaders are calling on community Sam said. Hupacasath and Tseshaht had members to step up and speak up about their own ways of living and sharing how the process for resolution should before the treaty process made them unfold. draw a line through the rivers and Resolving the issues will only streams that run through the territory strengthen the nations, said Sam, who and put a line around land for money. added that communities would have to “There was no issue until the treaty be creative around contentious issues; process,” he said. reminding people that Nuu-chah-nulth Then Canada was successful in bringdid have their own mechanisms for deal- ing that boundary issue into the mix for ing with sharing territory and resolving the fishing litigation. boundary disputes. Sam said it was disheartening to be Sam expects that each nation will disformally excluded from the decision cuss the process at their next community because of it. meeting and then come together to feast The hereditary chiefs of the five and have a forum about the reasons why nations that were allowed to go forward the issues must be dealt with. They at trial made a declaration on Jan. 22 expect the process to be difficult, but that said all Nuu-chah-nulth nations respectful, inclusive and done in a way would benefit from the fishing rights that makes sense culturally. win. There are two goals, said Casavant: 1. The excluded nations have been invitImprove and maintain good relations ed to the negotiation table to discuss among the nations; 2. Meet the needs of how the group will implement their right the court in preparation for Phase Two of to Nuu-chah-nulth commercial fisheries. the Nuu-chah-nulth fishing rights case. A negotiation team has been established. Sam has his eye on Phase Two. As the The first meeting of the team was held initial trial moved forward in BC Feb. 17. Supreme Court, Canada pushed to have By Debora Steel Ha-Shilth-Sa Reporter