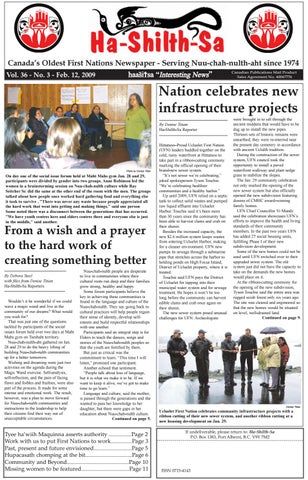 On day one of the social issue forum held at Maht Mahs gym Jan. 28 and 29, participants were divided by gender into two groups. Anne Robinson led the women in a brainstorming session on Nuu-chah-nulth culture while Ray Seitcher Sr. did the same at the other end of the room with the men. The groups talked about how people once worked hard gathering food and everything else it took to survive . &quot;There was never any waste because people appreciated all the hard work that went into getting and making things,&quot; said one person Some noted there was a disconnect between the generations that has occurred. &quot;We have youth centres here and elders centres there and everyone else is just in the middle,&quot; said another.

From a wish and a prayer to the hard work of creating something better By Debora Steel with files from Denise Titian Ha-Shilth-Sa Reporters Wouldn’t it be wonderful if we could wave a magic wand and live in the community of our dreams? What would you wish for? That was just one of the questions tackled by participants of the social issues forum held over two days at Maht Mahs gym on Tseshaht territory. Nuu-chah-nulth-aht gathered on Jan. 28 and 29 to do the heavy lifting of building Nuu-chah-nulth communities up for a better tomorrow. Wishing and dreaming were just two activities on the agenda during the Magic Wand exercise. Self-analysis, self-reflection, and the pain of facing flaws and foibles and frailties, were also part of the process. It made for some intense and emotional work. The result, however, was a plan to move forward for Nuu-chah-nulth communities and instructions to the leadership to help their citizens find their way out of unacceptable circumstances.

Nuu-chah-nulth people are desperate to live in communities where their cultural roots run deep and their families grow strong, healthy and happy. Some forum participants believe the key to achieving these communities is found in the language and culture of the Nuu-chah-nulth. They say going back to cultural practices will help people regain their sense of identity, develop selfesteem and build respectful relationships with one another. Participants said an integral step is for Elders to teach the dances, songs and stories of the Nuu-chah-nulth peoples so that the youth are fortified by them. But just as critical was the commitment to learn. “This time I will listen,” promised one participant. Another echoed that sentiment. “People talk about loss of language, but it is what we make it to be. If we want to keep it alive, we’ve got to make time to go learn.” Language and culture, said the mother, is passed through the generations and she wanted to pass her knowledge to her daughter, but there were gaps in her education about Nuu-chah-nulth culture. Continued on page 5.

Hittatsoo–Proud Ucluelet First Nation (UFN) leaders huddled together on the cold, rainy waterfront at Hittatsoo to take part in a ribbon-cutting ceremony marking the official opening of their brand-new sewer system. “It’s not sewer we’re celebrating,” joked spokesperson Tyson Touchie. “We’re celebrating healthier communities and a healthy harbor.” Up until 2009, UFN relied on a septic tank to collect solid wastes and pumped raw liquid effluent into Ucluelet Harbor. Touchie said it’s been more than 30 years since the community has been able to harvest clams and crab on their shores. Besides the increased capacity, the new $2.6 million system keeps wastes from entering Ucluelet Harbor, making for a cleaner environment. UFN now pumps its sewage through a submarine pipe that stretches across the harbor to holding ponds on High Focus Island, District of Ucluelet property, where it is treated. Touchie said UFN pays the District of Ucluelet for tapping into their municipal water system and for sewage treatment. He hopes it won’t be too long before the community can harvest edible clams and crab once again on their shores. The new sewer system posed unusual challenges for UFN. Archeologists

were brought in to sift through the ancient middens that would have to be dug up to install the new pipes. Thirteen sets of historic remains were unearthed; they were re-interred near the present day cemetery in accordance with ancient Uclulth tradition. During the construction of the sewer system, UFN council took the opportunity to install a paved waterfront walkway and plant sedge grass to stabilize the slopes. The Jan. 29 community celebration not only marked the opening of the new sewer system but also officially opened the new subdivision featuring dozens of CMHC award-winning family homes. UFN Chief Councillor Vi Mundy said the celebration showcases UFN’s efforts to improve the health and living standards of their community members. In the past two years UFN has added 27 social housing units, fulfilling Phase I of their new subdivision development. Some of the new homes could not be used until UFN switched over to their upgraded sewer system. The old system just did not have the capacity to take on the demands the new homes would place on it. At the ribbon-cutting ceremony for the opening of the new subdivision, Tyson Touchie said the entire area was rugged scrub forest only six years ago. The site was cleared and engineered so that the new homes would be situated on level, well-drained land. Continued on page 9.