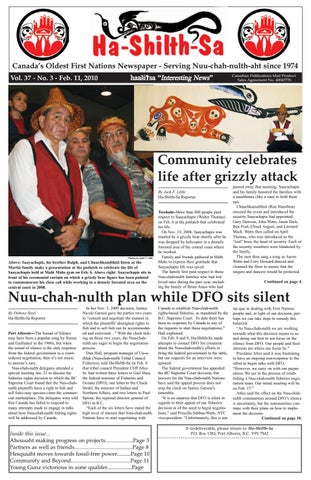 Above: Saayachapis, his brother Ralph, and Chuuchkamlthnii listen as the Martin family make a presentation at the potlatch to celebrate the life of Saayachapis held at Maht Mahs gym on Feb. 6. Above right: Saayachapis sits in front of his ceremonial curtain on which a grizzly bear figure has been painted to commemorate his close call while working in a densely forested area on the central coast in 2008.

Tseshaht–More than 800 people paid respect to Saayachapis (Walter Thomas) on Feb. 6 at the potlatch that celebrated his life. On Nov. 19, 2008, Saayachapis was mauled by a grizzly bear shortly after he was dropped by helicopter in a densely forested area of the central coast where he worked. Family and friends gathered at Maht Mahs to express their gratitude that Saayachapis life was saved. The family first paid respect to those Nuu-chah-nulth families who had lost loved ones during the past year, including the family of Brian Amos who had

passed away that morning. Saayachapis and his family honored the families with a taaulthmaa (like a cane to hold them up). Chuuchkamalthnii (Ron Hamilton) emceed the event and introduced the security Saayachapis had appointed: Gary Dawson, John Watts, Jason Dick, Ben Fred, Chuck August, and Leonard Mack. Watts then called on April Thomas, who was introduced as the “real” boss, the head of security. Each of the security members were blanketed by the family. The men then sang a song as Aaron Watts and Cory Howard danced and cleansed the floor to ensure that the singers and dancers would be protected. Continued on page 4.

Port Alberni—The Sound of Silence may have been a popular song by Simon and Garfunkel in the 1960s, but when the sound of silence is the only response from the federal government to a courtordered negotiation, then it’s not music to anyone’s ears. Nuu-chah-nulth delegates attended a special meeting Jan. 22 to discuss the fisheries rights decision in which the BC Supreme Court found that the Nuu-chahnulth plaintiffs have a right to fish and sell fish—any species—into the commercial marketplace. The delegates were told that Canada has failed to respond to many attempts made to engage in talks about how Nuu-chah-nulth fishing rights will be addressed by Canada.

In her Nov. 3, 2009 decision, Justice Nicole Garson gave the parties two years to “consult and negotiate the manner in which the plaintiffs’ aboriginal rights to fish and to sell fish can be accommodated and exercised…” With the clock ticking on those two years, the Nuu-chahnulth are eager to begin the negotiation process. Don Hall, program manager of Uu-athluk (Nuu-chah-nulth Tribal Council Fisheries), told Ha-Shilth-Sa on Feb. 8 that tribal council President Cliff Atleo Sr. had written three letters to Gail Shea, the federal minister of Fisheries and Oceans (DFO), one letter to the Chuck Strahl, the minister of Indian and Northern Affairs, and two letters to Paul Sprout, the regional director general of DFO in B.C. “Each of the six letters have stated the high level of interest that Nuu-chah-nulth Nations have to start negotiating with

Canada to establish Nuu-chah-nulth rights-based fisheries, as mandated by the B.C. Supreme Court. To date there has been no response by Canada to any of the requests to start these negotiations,” Hall explained. On Feb. 8 and 9, Ha-Shilth-Sa made attempts to contact DFO for comment about the Nuu-chah-nulth’s efforts to bring the federal government to the table, but our requests for an interview were ignored. The federal government has appealed the BC Supreme Court decision, but lawyers for the Nuu-chah-nulth Nations have said the appeal process does not stop the clock on Justice Garson’s timetable. “It is no surprise that DFO is silent in regards to their appeal of our fisheries decision or of the need to begin negotiations,” said Priscilla Sabbas-Watts, NTC vice-president. “Unfortunately, this is sta-

tus quo in dealing with First Nations people and, in light of our decision, perhaps we can take steps to remedy this behavior. “As Nuu-chah-nulth we are working towards what this decision means to us and doing our best to not focus on the silence from DFO. Our people and their interests are where our focus lie.” President Atleo said it was frustrating to have an ongoing non-response to the effort to begin talks with DFO. “However, we carry on with our preparation. We are in the process of establishing a Nuu-chah-nulth fisheries negotiation team. Our initial meeting will be on Feb. 17.” Atleo said the effect on the Nuu-chahnulth communities around DFO’s silence is uncertainty, but the communities continue with their plans on how to implement the decision. Continued on page 10.