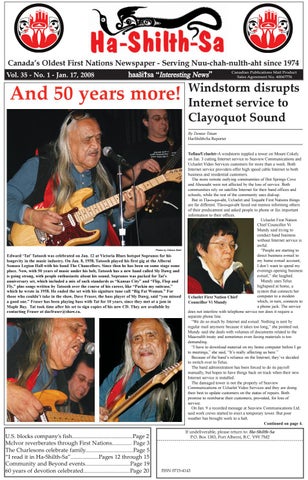 Edward ‘Tat’ Tatoosh was celebrated on Jan. 12 at Victoria Blues hotspot Sopranos for his longevity in the music industry. On Jan. 8, 1958, Tatoosh played his first gig at the Alberni Somass Legion Hall with his band The Chancellors. Since then he has been on some stage some place. Now, with 50 years of music under his belt, Tatoosh has a new band called Sly Dawg and is going strong, with people enthusiastic about his sound. Sopranos was packed for Tat’s anniversary set, which included a mix of such standards as “Kansas City” and “Flip, Flop and Fly,” plus songs written by Tatoosh over the course of his career, like “Packin my suitcase,” which he wrote in 1958. He ended the set with his signiture tune call “Big Fat Woman.” For those who couldn’t take in the show, Dave Fraser, the bass player of Sly Dawg, said “you missed a good one.” Fraser has been playing bass with Tat for 10 years, since they met at a jam in Maple Bay. Tat took time after his set to sign copies of his new CD. They are available by contacting Fraser at dacfraser@shaw.ca.

Tofino/Ucluelet–A windstorm toppled a tower on Mount Cokely on Jan. 3 cutting Internet service to Seaview Communications and Ucluelet Video Services customers for more than a week. Both Internet service providers offer high speed cable Internet to both business and residential customers. The more remote outlying communities of Hot Springs Cove and Ahousaht were not affected by the loss of service. Both communities rely on satellite Internet for their band offices and schools, while the rest of the community uses dial-up. But in Tla-o-qui-aht, Ucluelet and Toquaht First Nations things are far different. Tla-o-qui-aht faxed out memos informing others of their predicament and asked people to phone or fax important information to their offices. Ucluelet First Nation Chief Councillor Vi Mundy said trying to conduct band business without Internet service is awful. “People are starting to direct business e-mail to my home e-mail account; I don’t want to spend my evenings opening business e-mail,” she laughed. Mundy uses Telus highspeed at home, a system that connects her computer to a modem Ucluelet First Nation Chief which, in turn, connects to Councillor Vi Mundy a phone jack. The service does not interfere with telephone service nor does it require a separate phone line. “We do so much by Internet and e-mail. Nothing is sent by regular mail anymore because it takes too long,” she pointed out. Mundy said she deals with volumes of documents related to the Maa-nulth treaty and sometimes even faxing materials is too demanding. “I have to download material on my home computer before I go to meetings,” she said, “It’s really affecting us here.” Because of the band’s reliance on the Internet, they’ve decided to switch over to Telus. The band administration has been forced to do its payroll manually, but hopes to have things back on track when their new Internet service is installed. The damaged tower is not the property of Seaview Communications or Ucluelet Video Services and they are doing their best to update customers on the status of repairs. Both promise to reimburse their customers, pro-rated, for loss of service. On Jan. 9 a recorded message at Seaview Communications Ltd. said work crews started to erect a temporary tower. But poor weather has brought work to a halt. Continued on page 4. If undeliverable, please return to: Ha-Shilth-Sa P.O. Box 1383, Port Alberni, B.C. V9Y 7M2