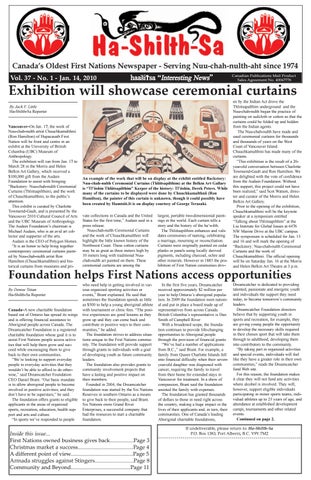 Exhibition will showcase ceremonial curtains By Jack F. Little Ha-Shilth-Sa Reporter Vancouver–On Jan. 17, the work of Nuu-chah-nulth artist Chuuchkamalthnii (Ron Hamilton) of Hupacasath First Nation will be front and centre in an exhibit at the University of British Columbia (UBC) Museum of Anthropology. The exhibition will run from Jan. 17 to March 28 in the Morris and Helen Belkin Art Gallery, which received a $100,000 gift from the Audain Foundation to assist with bringing “Backstory: Nuu-chah-nulth Ceremonial Curtains (Thliitsapilthim), and the work of Chuuchkamalthnii, to the public’s attention. This exhibit is curated by Charlotte Townsend-Gault, and is presented by the Vancouver 2010 Cultural Council of Arts and the UBC Museum of Anthropology. The Audain Foundation’s chairman is Michael Audain, who is an avid art collector and supporter of the arts. Audain is the CEO of Polygon Homes. “It is an honor to help bring together contemporary ceremonial curtains painted by Nuu-chah-nulth artist Ron Hamilton (Chuuchkamalthnii) and historical curtains from museums and pri-

An example of the work that will be on display at the exhibit entitled Backstory: Nuu-chah-nulth Ceremonial Curtains (Thliitsapilthim) at the Belkin Art Gallary is “Tl’iishin Thliitsapilthim” Keeper of the history: Tl’iishin, Derek Peters. While many of the curtains to be displayed were done by Chuuchkamalthnii (Ron Hamilton), the painter of this curtain is unknown, though it could possibly have been created by Hamtsiit.It is on display courtesy of George Terasaki. vate collections in Canada and the United States for the first time,” Audain said in a press release. Nuu-chah-nulth Ceremonial Curtains and the work of Chuuchkamalthnii will highlight the little known history of the Northwest Coast. These cotton curtains may be as great as three meters high by 10 meters long with traditional Nuuchah-nulth art painted on them. These ceremonial curtains are among the

largest, portable two-dimensionial paintings in the world. Each curtain tells a story and the history of the ha‘wilth. The Thliitsapilthim enhances and validates ceremonies of naming, celebrating a marriage, mourning or reconciliation. Curtains were originally painted on cedar planks or panels using locally derived pigments, including charcoal, ochre and other minerals. However in 1885 the prohibition of First Nation ceremonies driv-

en by the Indian Act drove the Thliitsapalthim underground and the Nuu-chah-nulth began the practice of painting on sailcloth or cotton so that the curtains could be folded up and hidden from the Indian agents. The Nuu-chah-nulth have made and used ceremonial curtains for thousands and thousands of years on the West Coast of Vancouver Island. Chuuchkamalthnii has made many of the curtains. “This exhibition is the result of a 20year-old conversation between Charlotte Townsend-Gault and Ron Hamilton. We are delighted with the vote of confidence from the Audain Foundation. Without this support, this project could not have been realized,” said Scot Watson, director and curator of the Morris and Helen Belkin Art Gallery. Prior to the opening of the exhibition, Chuuchkamalthnii will be the keynote speaker at a symposium entitled “Talking about Thliitsapilthim” at the Liu Institute for Global Issues at 6476 NW Marine Drive at the UBC campus. The symposium is scheduled for Jan. 15 and 16 and will mark the opening of “Backstory: Nuu-chah-nulth Ceremonial Curtains and the work of Chuuchkamalthnii. The official opening will be on Saturday Jan. 16 at the Morris and Helen Belkin Art Theatre at 3 p.m.

Foundation helps First Nations access opportunities By Denise Titian Ha-Shilth-Sa Reporter Canada–A new charitable foundation based out of Ontario has spread its wings and is offering financial assistance to Aboriginal people across Canada. The Dreamcatcher Foundation is a registered charitable foundation whose goal it is to assist First Nations people access activities that will help them grow and succeed while encouraging them to give back to their own communities. “We’re looking to support everyday people in everyday activities that they wouldn’t be able to afford to do otherwise,” said Dreamcatcher Foundation CEO Daniel Brant. “Our basic mandate is to allow aboriginal people to become involved in positive activities; and they don’t have to be superstars,” he said. The foundation offers grants to eligible applicants in the areas of organized sports, recreation, education, health support and arts and culture. “In sports we’ve responded to people

who need help in getting involved in various organized sporting activities or events,” Brant explained. He said that sometimes the foundation spends as little as $500 to help a young aboriginal athlete with tournament or clinic fees. “The positive experiences are good lessons as they grow up and they can come back and contribute in positive ways to their communities,” he added. The foundation strives to address situations unique to the First Nations community. The foundation will provide support through grants to individuals with a goal of developing youth as future community leaders. The foundation also provides grants to community involvement projects that have a lasting and positive impact on their members. Founded in 2004, the Dreamcatcher foundation was started by the Six Nations Reserves in southern Ontario as a means to give back to their people, said Brant. Six Nations owns Grand River Enterprises, a successful company that had the resources to start a charitable foundation.

In the first five years, Dreamcatcher received approximately $2 million per year to help Ontario’s aboriginal population. In 2009 the foundation went national and put in place a board made up of representatives from across Canada. British Columbia’s representative is Dan Smith of Campbell River With a broadened scope, the foundation continues to provide life-changing opportunities to Aboriginal people through the provision of financial grants. “We’ve had a number of applications from B.C.,” said Brant. For example, a family from Queen Charlotte Islands fell into financial difficulty when their sevenyear-old daughter was diagnosed with cancer, requiring the family to travel from their home for extended stays in Vancouver for treatment. In a show of compassion, Brant said the foundation assisted the family with expenses. The foundation has granted thousands of dollars to those in need right across the country, making a huge impact in the lives of their applicants and, in turn, their communities. One of Canada’s leading Aboriginal charitable foundations,

Dreamcatcher is dedicated to providing talented, passionate and energetic youth and individuals the support they need today, to become tomorrow’s community leaders. Dreamcatcher Foundation directors believe that by supporting youth in sports and recreation, for example, they are giving young people the opportunity to develop the necessary skills required in their chosen sport that will take them through to adulthood, developing them into contributors to the community. “By taking part in organized activities and special events, individuals will feel like they have a greater role in their own communities,” reads the Dreamcatcher fund Web site. For this reason, the foundation makes it clear they will not fund any activities where alcohol is involved. They will, however, support eligible individuals participating in minor sports teams, individual athletes up to 25 years of age, and attendance at established development camps, tournaments and other related events. Continued on page 2.